The last one before we head home

So we’ve spent yet another joyously frustrating week in an insurance induced purgatory here in San Salvador.

We signed off the last blog awaiting some form of diagnosis from the doctor, who had made vague promises of emailing the details through to us that evening (Friday). Somewhat predictably, no email was forthcoming that night, so as Saturday became Sunday, and Monday rolled around yet again, we were still none the wiser as to the name of this mysterious affliction.

With no email in Mel’s inbox, we followed up with the insurance company, who informed us that they had made numerous attempts to contact Dr Villacorta, all of which had gone unanswered. Frustrated by the lack of progress and bored witless, we begrudgingly trudged down to the hospital and made yet another appointment to chase up the diagnosis.

When Mel eventually got to see the doctor (this time we only had to wait an hour longer than the scheduled appointment time), he apologised for not having something to us sooner, and prescribed Mel a truckload of drugs.

A few hours later, we received the following:

I am considering a tropical infection or different kind of intestinal bacterial overgrowth, and a non-absorbable antibiotic was started. I gave her my advice to fly back home as soon as possible because her physical activity is limited and she will be more comfortable and safer.

Days passed. Phone calls were made. Emails were exchanged. And the outcome of all this waiting around?

They were not prepared to repatriate Mel due to her not having a return ticket.

In spite of having told them on numerous occasions that we don’t possess return tickets due to the nature of our trip, it took them a week to get round to telling us that. The frustrating thing is that if they had of informed us of this clause, we would have booked our flights a lot earlier. Instead, we’ve had to sit around and wait for the last week. 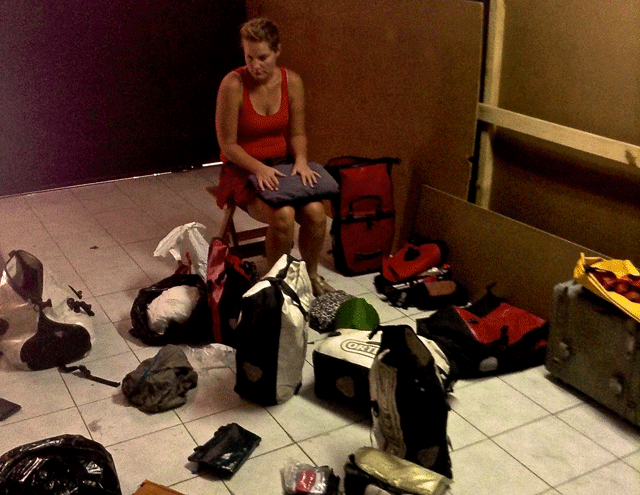 A forlorn Mel looks at the sum total of our lives

So our flights are now booked for tomorrow (Tuesday).

The bikes are dismantled and boxed (thanks to José and Danielle for driving us down to El Tunco to collect them), to save weight on the plane we’ve chucked out half of our meagre possessions (including Mel’s denim miniskirt, which now fits), and we’re headed home.

We’ll be in Sydney on Friday.