WARNING – THIS BLOG CONTAINS IMAGES OF A DISTURBING NATURE.  IF YOU ARE EASILY OFFENDED, EATING YOUR DINNER, OR TAKE NO PLEASURE AT LOOKING AT A BEARDED MAN WITH PLASTERS ON HIS NIPPLES, I SUGGEST YOU GO AND READ FACEBOOK OR SOMETHING.

I signed off the last blog asking readers to pray for Mel’s bowels.  Well either there isn’t a God, or you lot haven’t prayed hard enough.

We had left our campsite in Rio Tranquilo, and were headed into town to stuff our faces with empanadas (fried Cornish pasties) before hitting the road, but after tucking away only half of hers, Mel was running for the bathroom again. Returning some time (3 empanadas for me) later, it was clear that we weren’t going anywhere and so reluctantly returned to the campsite and pitched our tent again.

It had become obvious that the drugs I had brought back from my trip to Coyhaique weren’t working, but I was hoping that another day of rest would cure the condition.  As the next day broke, Melanie was sullen-faced, and gave the news that she was no better.  The town only had rudimentary medical facilities, and, getting nowhere fast, we had no option but to temporarily abandon our gear and take a bus north to visit a doctor in the region’s largest town, Coyhaique.

Upon arrival we were advised to visit the hospital, as it would give us the best chance of resolving the issue.  At the hospital, family and relatives are not allowed in with patients, so Mel was ushered into see the doctor alone. With her basic Spanish, and the limited English of the doctor, she returned with a diagnosis of gastroenteritis, 3 days worth of pills, and some rehydration sachets.  There were strict orders to rest for a week (no cycling), and to eat a simple diet. 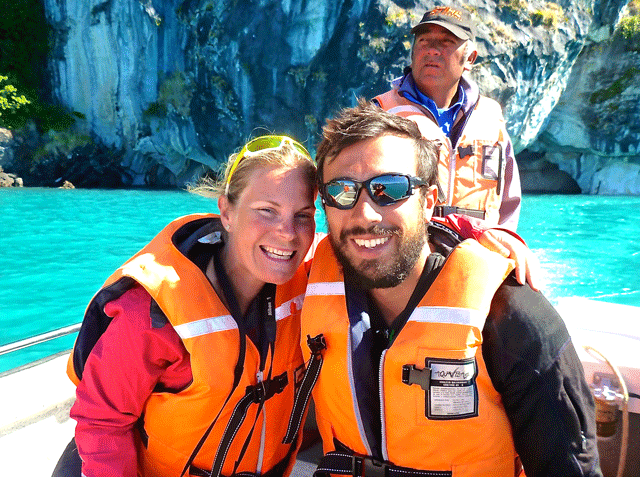 There is a lot of text here without a picture, so here’s one of us on a boat. Nice isn’t it??

We took the doctors advice seriously, so booked into the cheapest Hospedaje (boarding house) we could find, and took another 3 days off, which we spent lounging about whilst watching the Super Bowl in Spanish (thanks to all our Facebook and Twitter followers for the suggestions of activities.  We partook in none of them).  With little sign of improvement after completing the course of pills, we were back at the hospital.  This time the doctor spoke a little more English, but proceeded to tell Mel that “ the pills in Chile don’t work” so he prescribed her some paracetemol instead.  Fantastic.

With few options left, we were at our wits’ end, so sought out the bus companies to see if we could get our bicycles on the bus.  “No” said the harridan behind the counter, “it’s far too difficult”.  Putting bikes on a bus halfway along its route is beyond Chilean bus companies.

“Let’s hire a car and drive back and collect the gear,” said Mel.  A good idea, until we realised that neither of us had our licences.  With seemingly all of our options exhausted, it was back to the original plan – cycling.

We stocked up on drugs, took the bus back to Tranquilo, packed up, and slowly began cycling north.  The road for the first 25km resembled a washboard, which made for very slow progress.

Look at the state of that road.  Lago General Carrera in the background

But we managed to push on around South America’s second largest lake, Lago General Carrera, which was an incredible shade of blue. 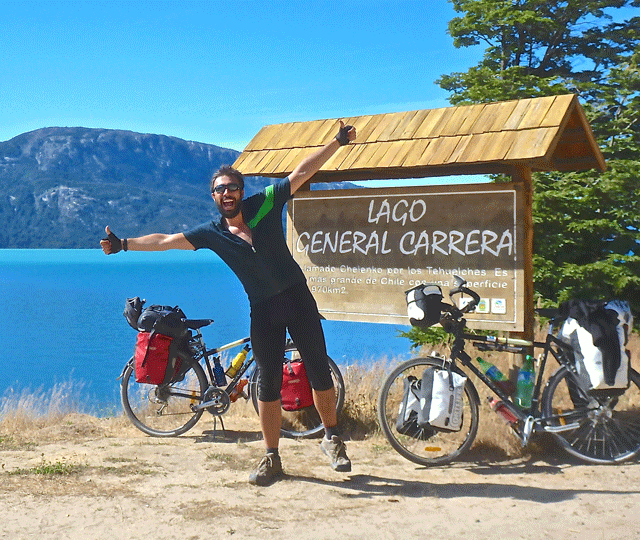 It took us two days to cover the 122km of gravel and hills to Cerro Castillo, when finally the road turns from gravel into… 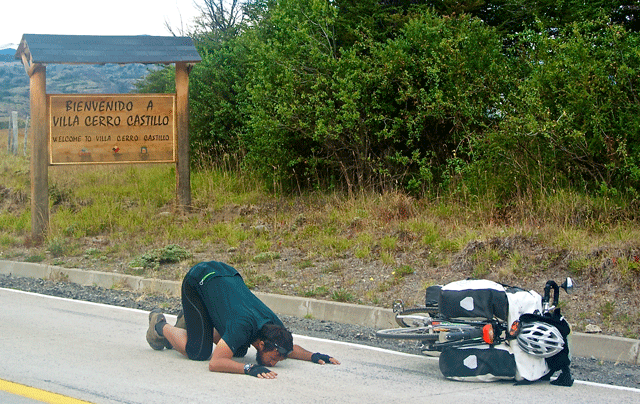 Bow down and kiss the smooth smooth road

The only redeeming feature of Cerro Castillo is the burger bus, where we opted for the two largest burgers they had.  And some fries.  All washed down with 3 Cokes.  This had repercussions for Melanie.

As we woke the next morning, with the burger excess taking it’s toll on both of us, we had the daunting task of climbing the highest point on the Carretera Austral – the Cuesta Del Diablo.  After numerous switchbacks, the road continues upwards eventually topping out at 1,120 metres. 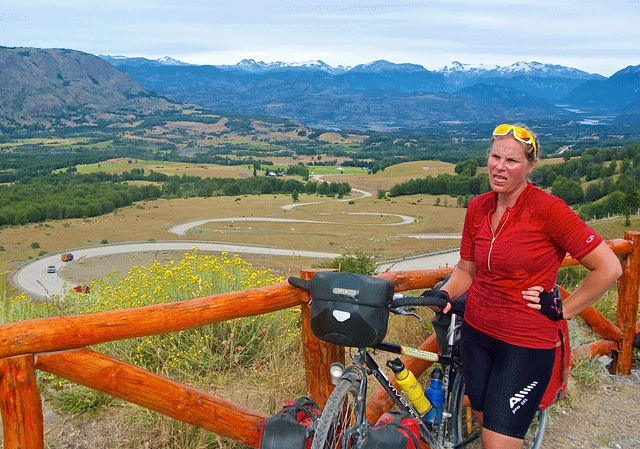 A combination of pedalling and pushing allowed Mel to struggle over the top, but the exertion had taken it out of her and she began vomiting shortly after lunch.  This continued for an hour until we made it to the national park campsite, where we camped alongside a troop of Scouts, who sang around the campfire until the small hours.

Along with the Scouts, we were up at dawn the next day, yet we had a glorious downhill run to Coyhaique, covering the 55ish kilometres in a little over three and a half hours.  However, shortly after our arrival, the determination and adrenalin that had got Mel through the last few days wilted away, and she began to feel weak and listless.  We had to get this problem sorted, so we marched to the hospital and we weren’t about to leave until Mel was fixed.   Imagine my surprise when I was called onto the ward to find Mel looking like this:

Not such happy days

They were pumping her full of antibiotics intravenously, after she had burst into tears whilst during her initial consultation.  Mel says that the doctor seemed rather taken aback that it had gone on for so long and the quantity of antibiotics she had consumed had no discernable effect.  Luckily, 2 hours later she was discharged, looking and feeling massively stoned.  They have prescribed her with a course of ninja-antibiotics, and I am pleased to report that she is slowly returning to her usual perky self.

So that’s it.  We’re in Coyhaique, resting again, but fingers crossed Mel is on the road to recovery.

We’ll be back on the road soon!

So you may have been wondering what the warning at the top of the page was all about.  Well, it’s not just Mel that has problems you know.  It appears that whilst I’m exerting myself on the bike, my nipples become erect and incredibly painful.  Readers – I need a solution as this one is clearly not working. 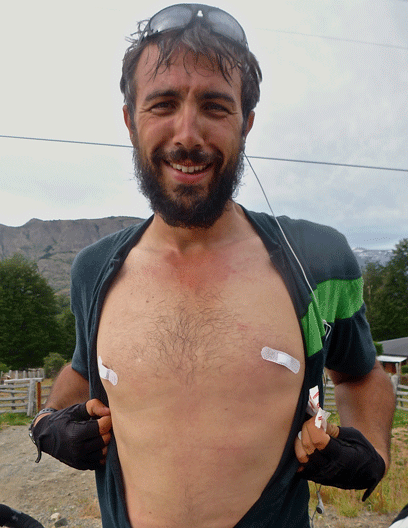 All suggestions welcome via Twitter, the Facebook page, or the comments section below.  I may even try some of them this time!