So firstly, a big thank you to all those who got in touch about my nipple situation.  Clearly, many others had been through similar trying circumstances.  Solutions included nipple tassels, fermented paw-paw (I don’t actually know what this is), and breast-feeding relief cream.  Interestingly, we had it on very good authority that sex lubricant would solve all my woes.  We managed to avoid the rather embarrassing scenario of asking a pharmacist for Immodium and sex-lubricant on Valentines Day by finding a tub of Vaseline instead.  My cycle jersey now looks like I’m lactating Brent Crude, but for now, my nipple woes are over.

We had left the previous blog with Mel recovering in Coyhaique.  She was improving daily, however the enforced stay in town was tearing our budget apart, so it was time to get moving.  With the bikes serviced and having taken a photo of the towns’ three-legged dog, we left Coyhaique for what we hoped would be the last time and crawled up the hill out of town.

As we rode alongside the Simpson River, we entered then national park and with the weather against us, we took the opportunity to camp after a measly 35km of cycling. 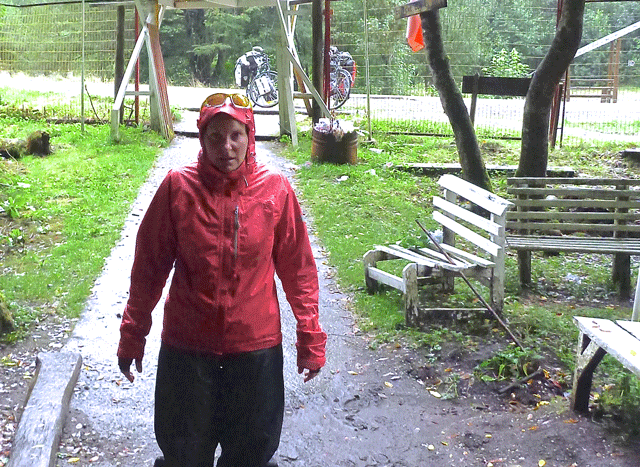 “Chris, we need to camp”

The next day, we stopped for lunch in a bus stop 12km outside of Villa Manguales.  On the opposite side of the road, wrapped up in a Bolivian blanket, was a very sad looking Argentinian hitchhiker.  As we were in the middle of nowhere and he looked cold and hungry, we took pity on him and offered him a sandwich.  He polished this off in a matter of seconds along with half a packet of biscuits and some of our cordial.  Content that our good deed for the day was done, we pedalled off only to arrive in Villa Manguales an hour or so later, to find him smugly sat in a cosy café, stuffing his face. 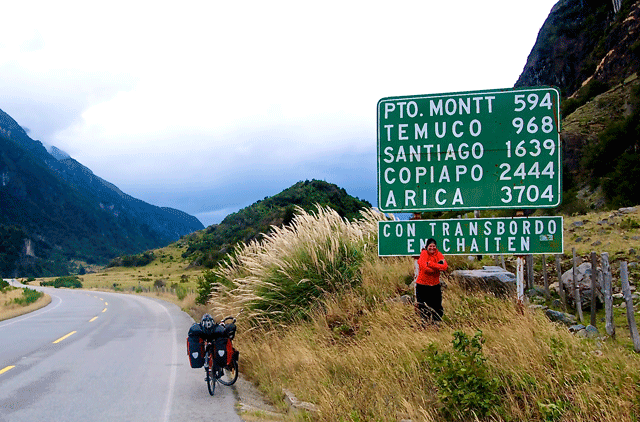 We had been told that Villa Manguales had a Casa de Ciclistas (free accommodation for cyclists), and that the host, Jorge, would actively seek us out to offer us a roof over our head.  As we rolled into town, we thought it was only a matter of time before Jorge found your intrepid duo to offer us a bed for the night.  As ever, such things don’t happen for us, so we were back out in the frigid afternoon, cycling again. 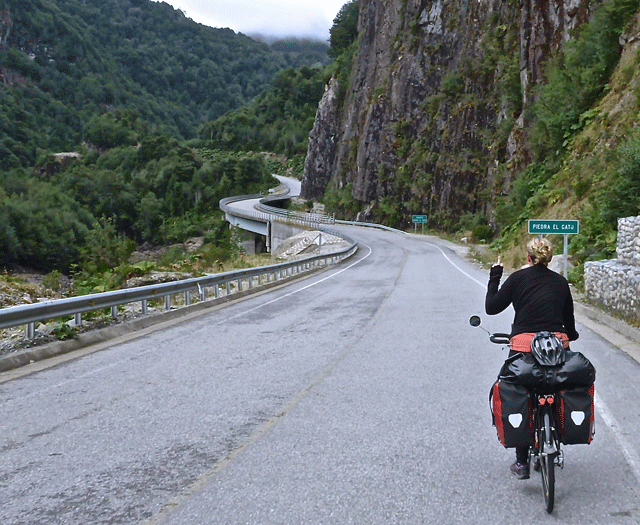 Mel shows how much she appreciates my encouraging words

Cold and exhausted, the day wore on, and the search for a wild camp spot proved fruitless.  We stumbled into a “town” called Campo Grande, which turned up an eco-camping site.  Apart from the cold showers, I couldn’t fathom out what was “eco” about this site, but we were grateful for somewhere to pitch the tent for the night.

The wind howled throughout the night and the next day we saw what looked like a fresh dusting of snow up in the mountains, which explains why it was so bitterly cold.  We spent the day cycling with four layers on, so as we climbed the hills we sweated profusely, and as we descended the other side, we froze. We pulled into Villa Amengual, and Mel declared that she simply couldn’t warm up, so played the hotel card.  We checked into an overpriced Hospedaje (B&B) for the night. 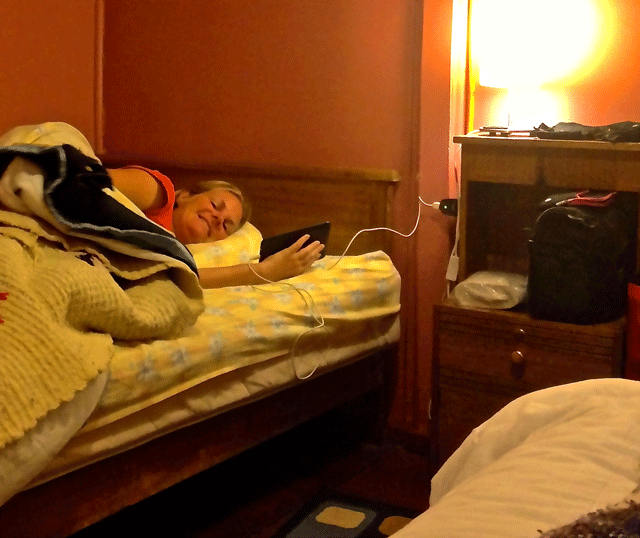 This is about the only time that Mel smiles

The comfy beds and wood-fired stove rejuvenated us, so the next day we tore up the remaining section of the tar-sealed road before reaching the Quelat national park, and disappointingly, the gravel.  With a dreadful surface underneath us, and increasingly steep road, I was soon blowing out of my arse and pissing with sweat.  Thankfully, a descending cyclist offered the following words of encouragement – “it’s way more fun going down”.

“Thanks for that you insufferable bell-end” I thought to myself as he rolled off down the hill.  I truly hope that he fell off.  Up the hill we went, taking a rain check on the five hour round trip to the “Enchanted Forest” (how enchanted was it really going to be?) until we finally made the top, which gave an incredible view of a huge gorge that we failed to take a photo of.   We freewheeled down the 8 kilometres of switchbacks to the valley floor whereupon we found a number of Chilean motorists pulled over at the side of the road.  On closer inspection they were drinking from muddy puddles labelled as “Mineral Water” and we were told, “it’s nice, but it tastes a bit weird”.

“Well of course it does, it’s a muddy puddle.  You’d be better off having a Powerade and a Centrum,” I thought to myself as we rode off.

Soon after, an energised Mel had left me trailing in her wake, so much so that she completely missed the fjord we had been cycling next to for an hour. 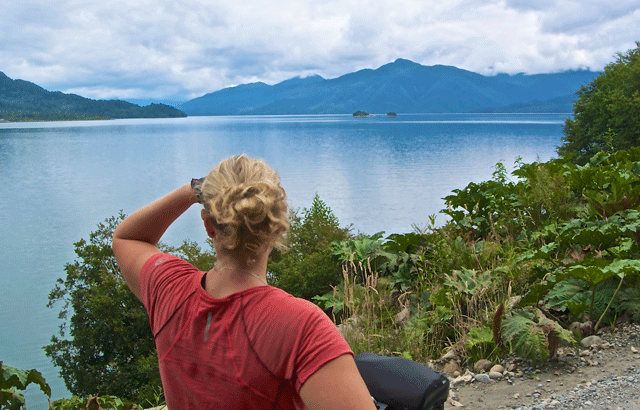 “Yes dear, that is a fjord that you’ve been riding next to for an hour”

Again, we skipped another attraction – the hanging glacier (glaciers are ten a penny in these parts, and once you’ve seen one…), so fixed our sights on Puyuhuapi, a town founded in the 1930’s by German settlers.  We had expectations of strudels and sauerkraut, but were served up morbid obesity and poorly stocked supermarkets.

As we’ve cycled north, we’ve met a number of cyclists headed in the opposite direction.  Often we will ask about the road conditions ahead we’ll be told things like “it’s flat all the way there”, and then find ourselves thrashing uphill for a couple of hours.  Or, they’ll say that “yes, the road is really quite good”, so why then does it feel like I am cycling in a bowl of fucking Coco Pops? 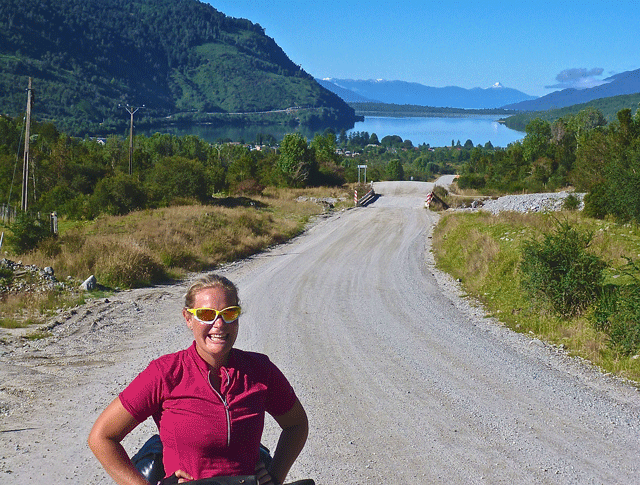 Yes, the road is flat and smooth all the way – on the way out of Puyuhuapi

This was the case as we rode out of Puyuhuapi on a road that was about as smooth as an acne ridden teenagers’ face.  Still, on we went, making it to La Junta, where the locals looked at us suspiciously.  After riding through 22km of road works, we had decided that we had had enough of the Carretera Austral, so took to vandalising bus stops instead. 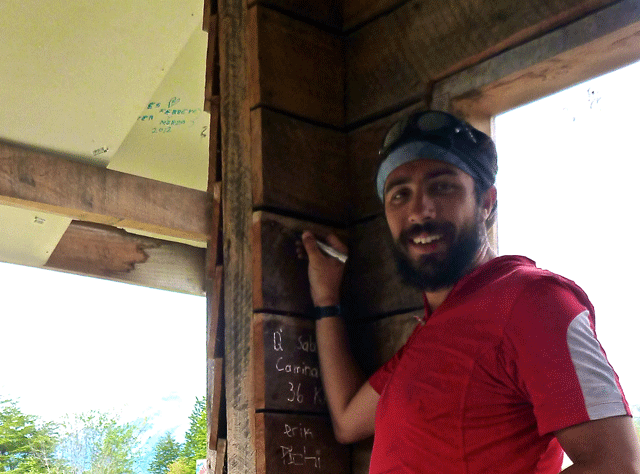 Graffiti isn’t cool, but everyone else was doing it so we thought we’d join in

Yes, I know it is a terrible thing to say, what with this being one of the worlds greatest cycling roads, but with all the incidents of the last month, we feel that we have been stuck in this part of the world forever.  We would recommend this road to anyone that asks us where they should ride, but just don’t get sick and spend two weeks in the section between Cochrane and Coyhaique!

Anyway, moan over, we decided that instead of heading to Chaiten and completing the Carretera, we would head to the white-water rafting town of Futaleufu, and in doing so, we passed our 2000th kilometre. 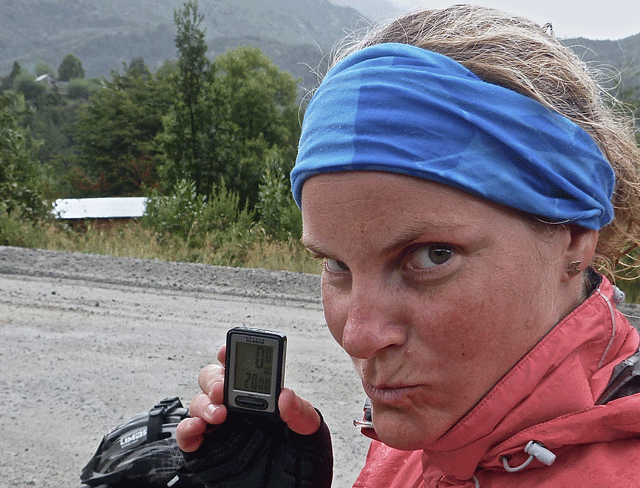 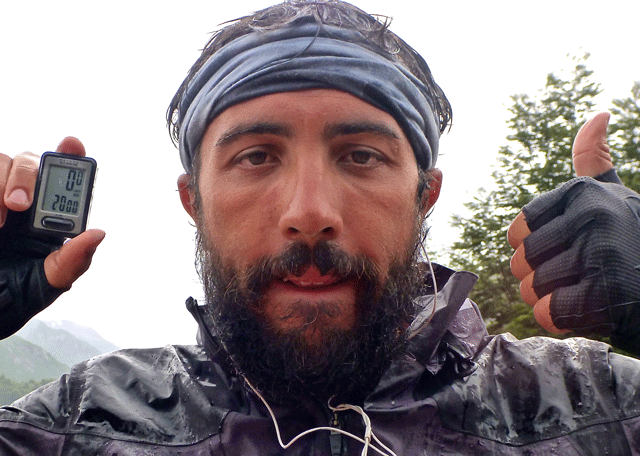 Having ridden for 8 consecutive days, we were looking forward to a well-deserved rest – we even thought about going rafting.  But nothing ever works out quite as planned for us.  The towns’ only ATM doesn’t accept Visa cards, which means that as of this moment, we only have $4 of Chilean Pesos to our name.

With no money left to pay for accommodation or food, we therefore have to drag our tired arses over the border to Argentina today (it’s stupid o’clock in the morning and I really should be in bed), in search of an ATM and a dinner that doesn’t include pasta shells and tomato sauce.