The utterly tedious one

We were back. Back in Panama having spent the previous three-weeks working our way through Florida’s finest fast-food emporiums, and as we sat in the cab on the way to our hostel, we began to speculate as to whether our bikes would still be where we left them. 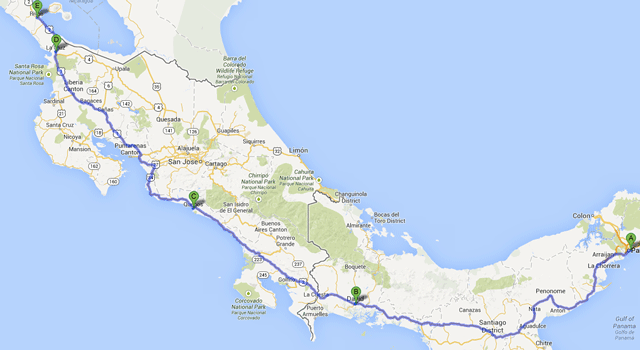 Before we left for our Christmas break, we had arranged for a Couchsurfing host to look after our possessions, but this fell through the day before we were due to leave Panama, which left us with little option but to stuff our bikes behind the hostel alongside all manner of junk. Fortunately, our steeds were safe and sound under a huge tarpaulin, so after swapping out Mel’s oversized handlebars, we were ready to continue our journey.

Leaving our hostel a little after six in the morning, we cycled into Panama City’s convoluted road system and were swamped by cars. Our goal was to cross The Centennial Bridge, the newer and closer of the two bridges that span the canal, yet after two hours and an incident involving a car and my panniers, we became hideously lost. The GPS struggled with the plethora of flyovers and one-way systems, and we were forced into a 20km detour along the canal to the quieter Bridge of The Americas. 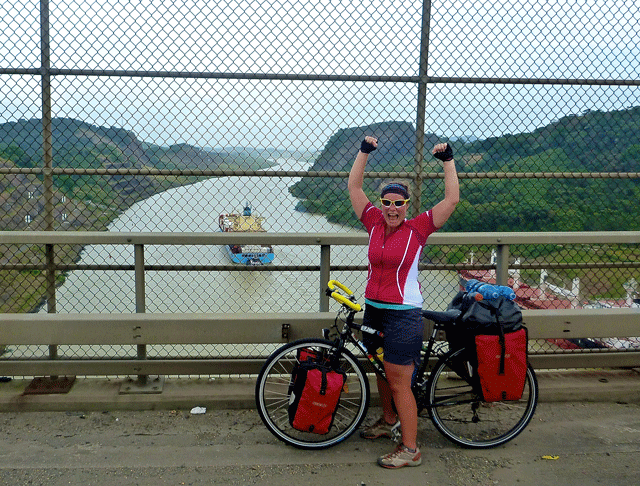 The canal is the dividing point between Central and South America, and by crossing the bridge we had finally left South America, a year after starting in its southern most city. Hurrah to that

Onwards we cycled, into Panama itself. The awful roads tested our bike handling skills, whilst cycling up gradients of 8% in 40°c heat made for some tough going. Still, at the end of a long day, each town would have some of America’s finest exports – McDonald’s, KFC, or Pizza Hut at which to dine. 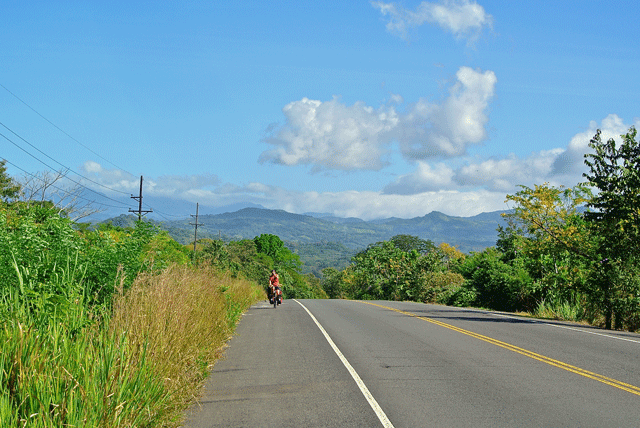 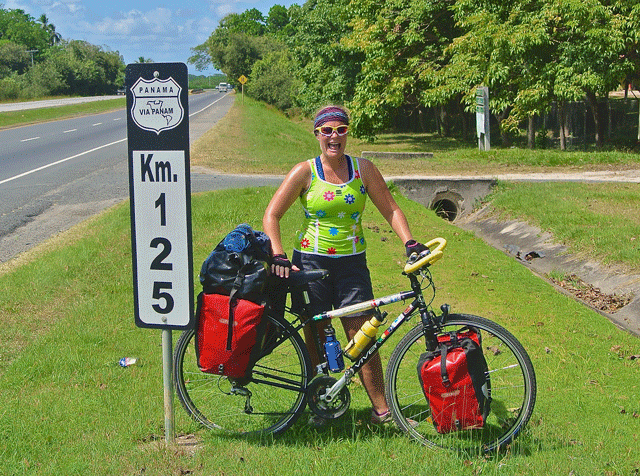 Oh go on, lets have another picture. Here’s Mel grinning because it isn’t hilly for once 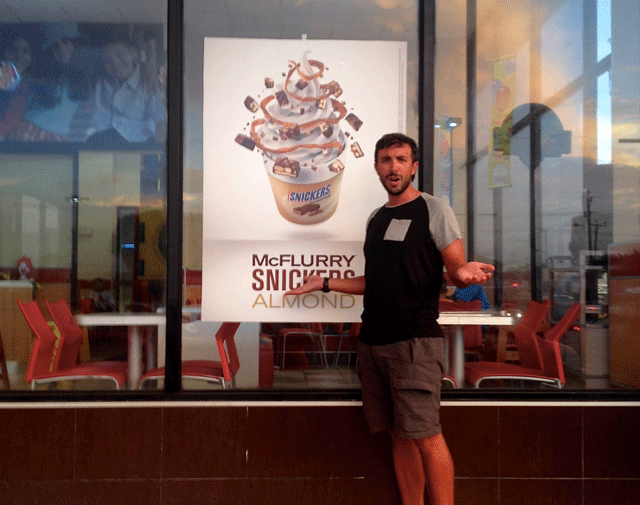 This one’s for you Chloë, Tim, and Danielle. I think Snickers Almond McFlurries exist only in the minds of the McDonald’s marketing department

Five sweaty days later, and we were in Panama’s second city – David. My bike had been making a rather disconcerting grinding noise, so whilst I waited for the local mechanics to take a look at the problem, I got chatting to a Spaniard named Roberto.

Roberto was from Andalucía, and was in the process of buying a cheap local bike with the intention of riding north. His goal was to ride as far as the bike would carry him, and when done, he would give the bike to a local child – a very noble way to travel. I told him that we would be leaving for Costa Rica the next day, and would probably see him on the road. 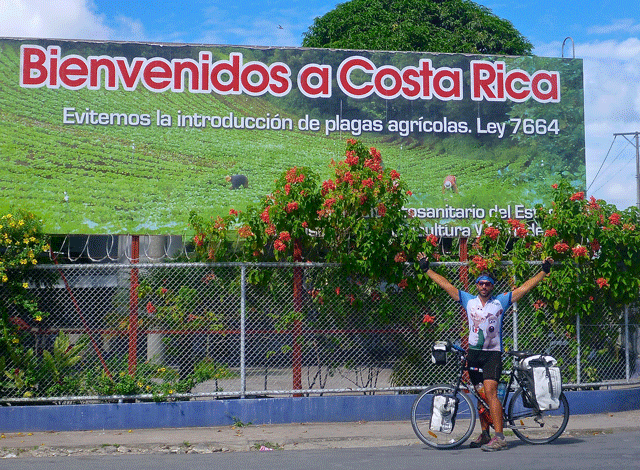 So this is Costa Rica. Note my new cycling jersey. Yes that’s right, it’s Wallace and Gromit, two plasticine characters who became popular in 1993. Yes, you read that correctly, nineteenfuckingninetythree. It was a Christmas present, and I shall be wearing it for every border crossing from now on

We bumped into Roberto as we crossed the border, and ended up riding together for the next week, yet just metres into Costa Rica, it soon became clear that his cheap bicycle was just that. After the first day, his chain-ring packed up, leaving him without the use of twelve of his eighteen gears. By day three, the piece that holds the cranks to the bike had come loose, leaving him unable to pedal, and by day five, his cassette had fallen off. Undeterred, he managed to find local mechanics to patch his bicycle back together, allowing him to continue. 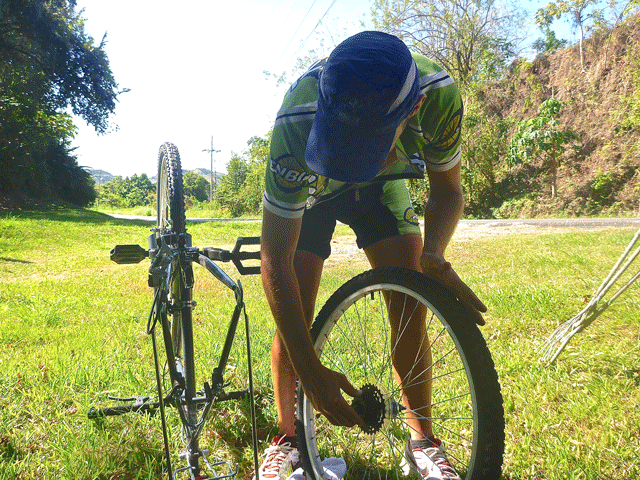 In this photo, Roberto’s cassette is just seconds from falling away from his wheel

Costa Rica itself is a beautiful place to cycle. Quiet roads, troops of monkeys milling about in trees, and squadrons (the new collective noun for them) of crimson macaws patrol the skies, but my God was it expensive. 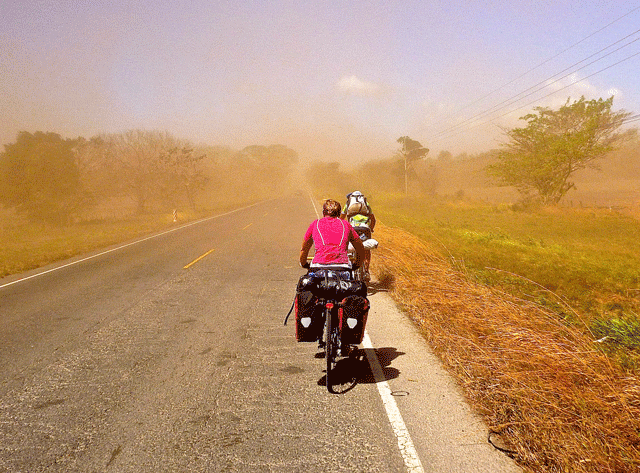 This Costa Rican attraction was free – a dust storm… 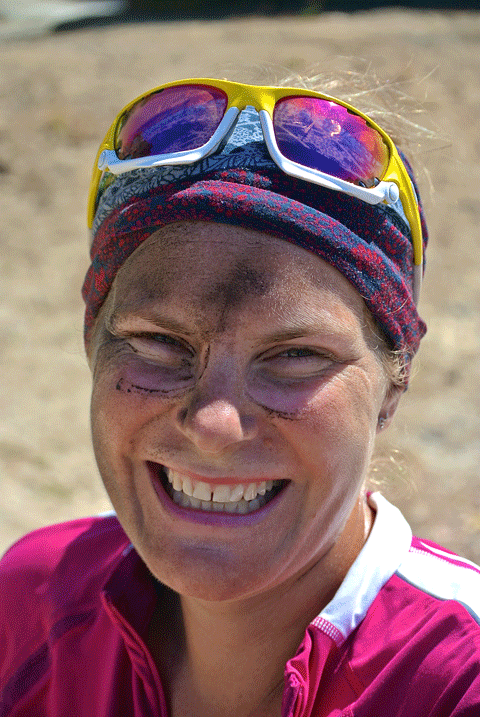 We spent a couple of days in the surf-town of Dominical, watching glorious sunsets over the Pacific, but the blisteringly high prices were making a serious dent into our now limited budget, so we opted not to hang around in Costa Rica for too long, and made a dash for Nicaragua instead. 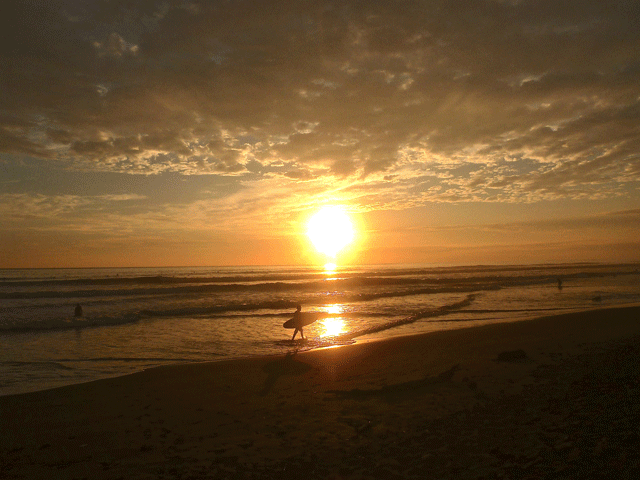 As we closed in on the frontier, Mel began to complain of her rear-wheel rubbing against her brakes, and it wasn’t until we arrived at the border that further investigation revealed this: 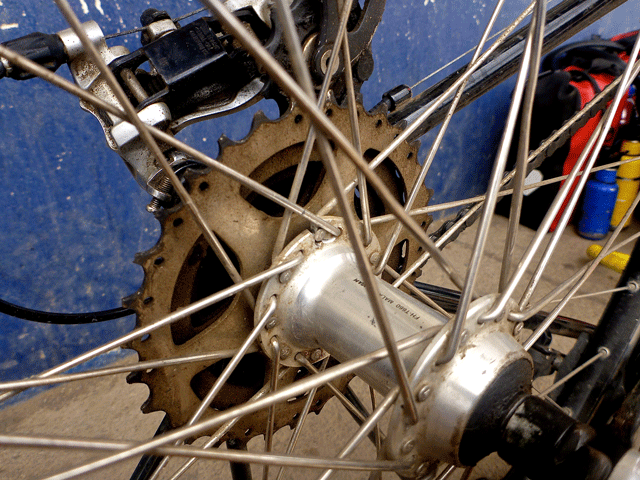 Look at the top of the hub. It be broke

With the hub now shot, Roberto kindly offered to take the load off of the wheel by loading all of Mel’s bags onto his bike: 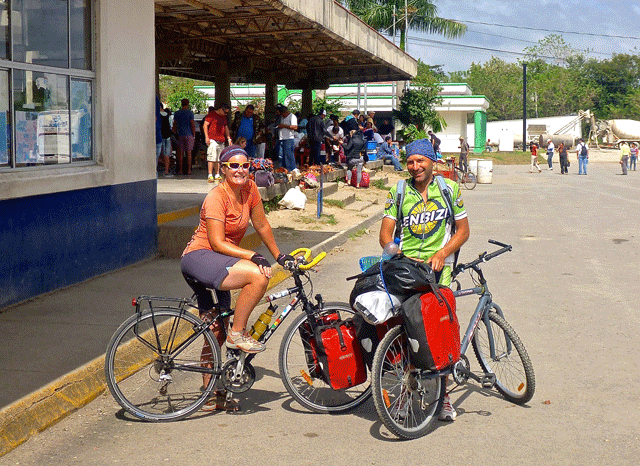 He’s a good bloke that Roberto. Look at him with all Mel’s bags on the back of his bike

And we limped across the border toward Rivas, the first major town in Nicaragua.

We enquired at the local market into the availability of a new hub, but none were to be found, which left us with little option but to head to the capital, Managua, in search of a new one. Fortunately, we were able to catch a lift with our hotel owner, who had an appointment there the next day. 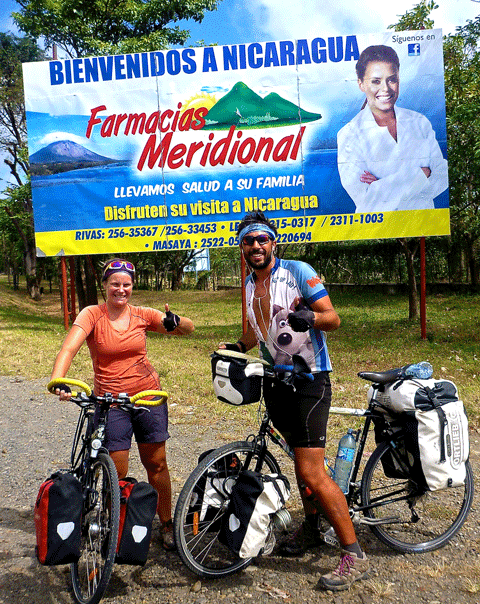 For Nicaraguans, Managua is an utterly terrifying place, and should not be visited by foreigners. Ever. As such, we were driven round the city with the doors locked and the tinted windows firmly up. This came to a head when we drove into a market and Mel and myself were locked in the car with the engine running, under strict instructions to open the door to no one.

We eventually found the hub, and returned to Rivas to see the ‘best’ mechanic in town, who claimed, rather dubiously, that he could rebuild the wheel in little more than two hours.

Two hours later, and our once round wheel had become egg-shaped.

We were pretty sure that the rim was now stuffed, and were now in a quandary. Managua was a dump, and we would have little chance of finding a good mechanic to rebuild the wheel without being brutally murdered, so with no other option, we bussed back to Costa Rica to try and get the wheel fixed. 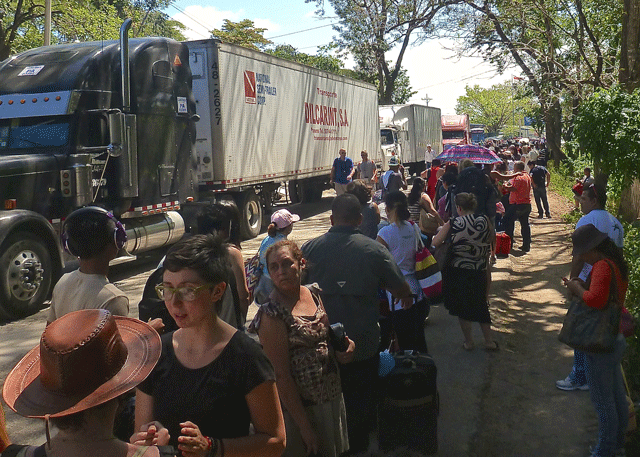 Look at all these people waiting to get into Costa Rica. I don’t know why they bother, it’s expensive and a little bit overrated

Arriving at the border, we found a queue stretching all the way across no-mans land, and after five hours of queuing in the blazing hot sun, we were finally inside Costa Rican immigration where Mel was denied entry due to having no onward ticket. It took all my self-restraint not to hurl the broken wheel at an Immigration Officer, but I remained calm and managed to convince one of them to let us in. Six hours later we were in San José, where we managed to find a more skilled mechanic who completely rebuilt the wheel.

Lets hope it holds til Mexico.