Welcome one and all to the first post on youjustpedal.

This is the blog chronicling Chris and Mel’s attempts to cycle all the way from the world’s most southerly city, Ushuaia, to the Prudhoe Bay, Alaska, a distance of roughly, or so we’ve read, 22,000kms.

We’ve sold every item we own, invested in two touring bikes, some camping gear, and some overly tight clothing (which we hope will loosen over the coming months), and have flown to the bottom of the world for this once in a lifetime trip.

Having said some teary farewells to friends in Melbourne a couple of weeks ago, we decided to break up the 35 hour flight by spending a couple of days in Dubai.  Unfortunately, one member of the team was struck down with chronic food poisoning on the flight and spent approximately 70% of the journey out of her seat.  Her recovery was not aided by a trip to the waterpark Wild Wadi the following day, although the powerful water jets on the “Master Blaster” ride certainly would have helped to sooth the chafed areas. 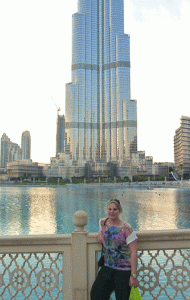 Having seen the sights and stuffed our faces in Dubai, it was time to depart for Buenos Aires.  Having battled with an obese Brazilian for the armrest for 15 hours, we were more than glad to be nearing our final destination.

The airport in Buenos Aires clearly advertises left luggage on their website, however upon arrival it turns out that they don’t actually offer this facility.  This led to the first of many debacles of trying to transport our massive bike boxes in cabs in South America.

Buenos Aires is a great city, but doesn’t have much in the way of tourist attractions.  So after having wandered round the local sights we decided to get ourselves down to La Bombonera, home of Boca Juniors. 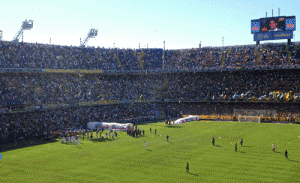 Unfortunately, the standard of football wasn’t up to much, but that didn’t seem to bother the home fans as they spent the whole game singing and bouncing up and down.  Considering that it was the last home game of a disappointing season against mid-table Godoy Cruz, it’s amazing how passionate they are about the game.  The contrast to the club that I follow which is characterised by the fans passive consumption of the game is astounding.  Boca got out of jail in the end with a last minute winner from Biandi to win 2-1.

We spent the rest of our time in Buenos Aires avoiding the torrential downpours, and the toxic chemical cloud from a container fire at the port before it was time to head to Ushuaia.  As ever, the farce of watching stupid cab drivers trying to force our bike boxes into their pitiful cabs nearly caused us to miss our flights, however we managed to check in in the nick of time.

An uneventful flight surrounded by my kind of people (it was like a practical clothing convention on that plane, all zip-off pants and Gore-Tex) was met with an eventful arrival, as not a single cab driver in Ushuaia would take the boxed bikes in their cars (are you noticing a theme yet?).  Mel headed to the hostel with the remainder of the luggage, leaving me to plead with the miserable bastards to take the bikes, only to be rebuffed numerous times.  Luckily, an enterprising young chap decided to unbox the bikes, sling them in the back of the car, tie the boot lid down with his scarf, and drive me to our hostel.  Crisis averted!

So we’ve spent the last two days trying to piece the bikes back together, but have failed miserably.  The combination of heavy-handed baggage handlers and our poor packing has meant we were missing some 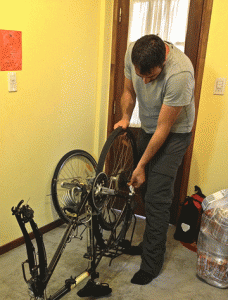 important nuts and bolts, whilst Mel’s backlight came out of the box in fifteen pieces.  This culminated in a trip to the local bike shop with our tails between our legs pleading with them to attach our front racks correctly, and to “make the back wheel go round properly” (my words, not Mel’s).

As we still had jobs to complete, we decided to stay on in Ushuaia for another day, which meant moving to a new hotel.  We loaded up the bikes for the 650 metre journey across town, and span the pedals for the first time on the trip, only to discover that the front of the bike had a rather disconcerting wobble as we rode.  This got progressively worse as we “powered” through the ride, to the point where we had to get off and push!

It took some hard thinking, some pork shoulder for lunch, a couple of beers, some continuity planning (Mel’s idea – “why don’t we forget about the trip and go to Antartica instead?”) until we figured out that the front rack wasn’t attached correctly and it was that which was causing the problem.

So with the font racks correctly attached, the bags repacked for the umpteenth time (Melbourne readers will be happy to know that Mel’s denim mini-skirt is still in, however the pin-cushion and majority of the sewing kit is out), the woefully underprepared duo are all set for an early departure tomorrow.

So, sit back, relax, follow us on Facebook and Twitter, and watch the journey unfold.  Remember that our misery achievements are your entertainment for the next 18 months. 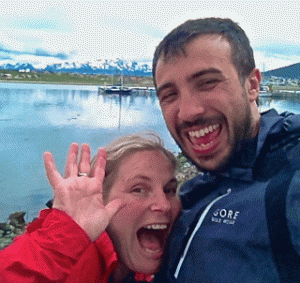 It’s going to be a rollercoaster.

featured
← Previous
Next → The one where Mel cries a lot