With the bags packed and loaded, we squeezed into our overly tight cycle gear and were headed out the door when Mel said:

Having heard those words at least 20 times on this trip so far, I decided to make watching the Champions League my priority, but as soon as the game was over, we were off to the local medical centre. 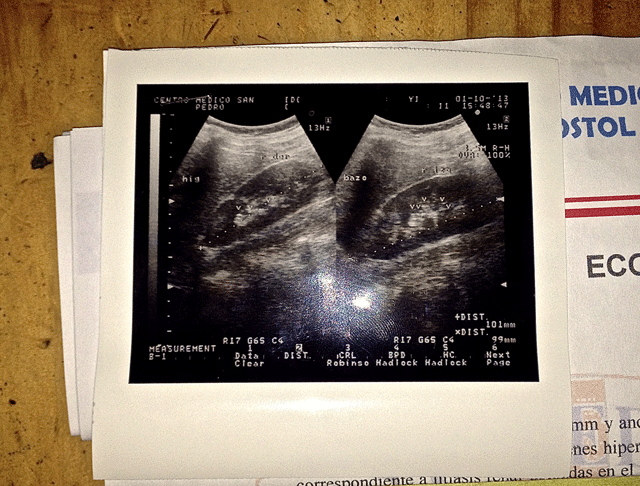 From the blog that brought you the inside of Mel’s head, now introducing Mel’s eight kidney stones

Mel had been diagnosed with kidney stones and was prescribed an inordinate amount of drugs and advised to rest, so, whilst not having anything better to do, I spent the next few days smoking and sunbathing, while Mel, not for the first time on this adventure, lay in bed drugged out of her mind.

Four days passed and we were back at the Doctor’s surgery, and whilst Mel’s condition had improved, she was told to take another week off.  Unable to cycle and with her Peruvian visa due to expire, we hopped on a bus across the border to Guayaquil, before I returned to Mancora to cycle the 400ish kilometres we had missed out on. 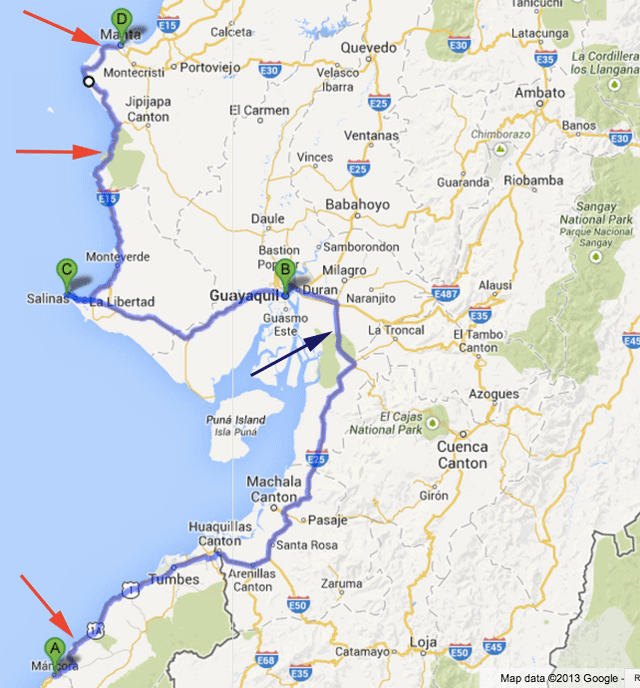 I can’t say I enjoyed the first day cycling after almost two weeks off.  I had rediscovered just how much fun smoking 20 cigarettes a day is, which meant I spent most of the day huffing and puffing toward the frontier.  I arrived late in the afternoon, and after a minor disagreement with immigration about my visa entitlements, I was in country number 5 – Ecuador! 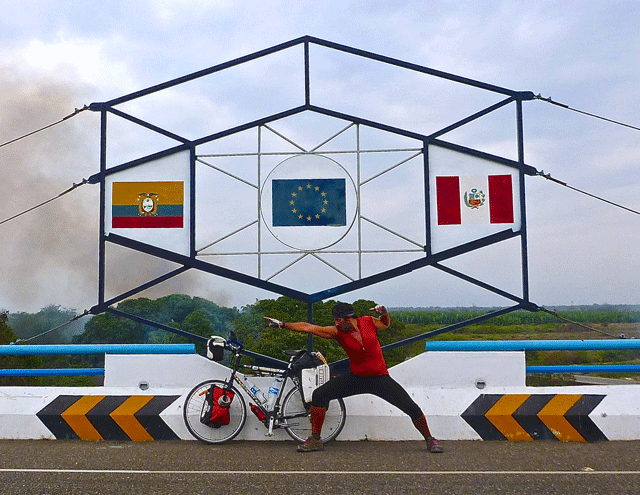 No, I do not know where the smoke was coming from. Nor do I know why there is an EU flag there

After 3 months of being terrorised by them, it felt good to have left the joyless Peruvians behind, and the difference between the two countries became apparent immediately.  The roads were well maintained, there was respect for cyclists, and the locals knew how to drive! 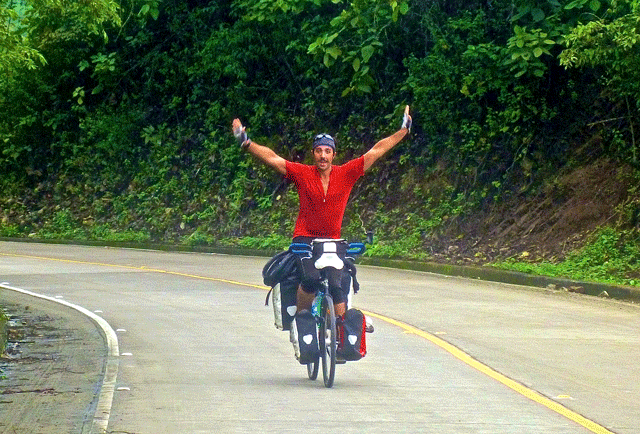 The ride was all going rather well, and sweaty progress was being made through what appeared to be endless banana plantations, when, 50km south of Guayaquil, I noticed that one of my tyres had become a little soft.  I managed to pull off the highway and attach the pump to the offending wheel, when all of a sudden HIIIISSSSSSSSSSSS – the air that remained in the tyre was now flooding out of the top of my pump.

I tried repeatedly to reinflate the tube, but the pump was knackered, and I could only manage a feeble 20psi – too soft to be ridden.  This left me with a bit of a dilemma – the road was too narrow for someone to pull over and pick me up, so my only option was to push the bike along the tiny shoulder to a wider section where I could flag someone down.  The GPS showed that there was a service station 4km away, so lamenting the fact that this was yet another country I have failed to cycle in full, I reloaded the bike and pushed it along the busy highway at 6km/h.

After working out that I had another 39 minutes of this to look forward to, I began to question just what I was doing.  Yet my self-pity rapidly dissipated when a truck pulled over just 100 metres up the road (blocking the whole lane while he was at it), and 5 minutes later with my gear safely stashed in the back, I was sat up in the cab, on my way to Guayaquil! 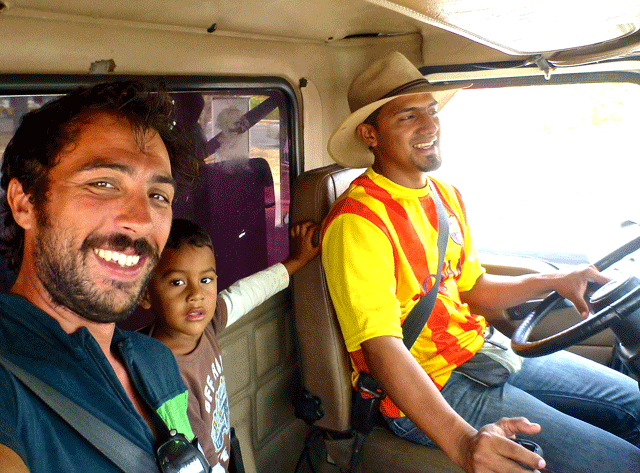 The child’s name was Carlos, but the driver never gave me his name. They took me all the way to the centre of Guayaquil. Bloody Legends! 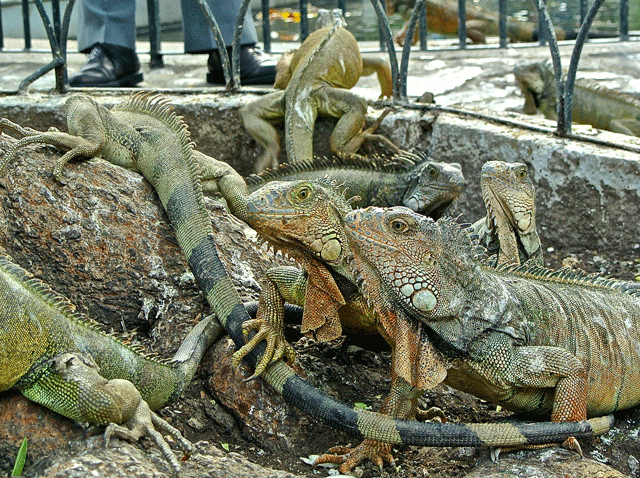 The famous Iguanas of Guayaquil

Mel was somewhat surprised to see me so early, and after seeking out a replacement pump, we were almost ready to leave Ecuador’s largest city, when Mel once again declared herself unfit.  We’ve ignored Mel’s ailments in the past only for them to come back and bite us on the arse, so we found ourselves in yet another Latin American medical establishment, and after a myriad of tests, the doctors could find nothing untoward, so sent us packing with a truckload of painkillers and a large bill. 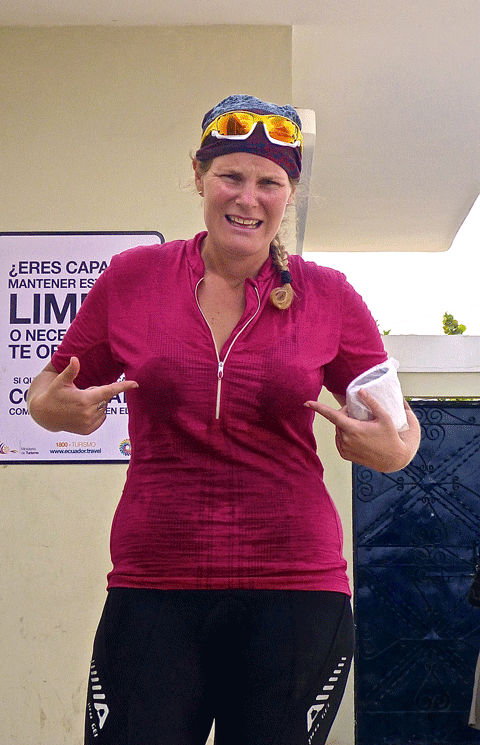 Sweaty knockers – not the ailment Mel went to hospital for…

With Mel once again anesthetised, I had to make a decision as to which route we would take through Ecuador – the hills or the coast.  Undoubtedly, the quickest route would have been straight back up into the Andes, but having ridden the highlands of both Bolivia and Peru, the coast seemed like a far more appealing option.

We left behind a drizzly Guayaquil, and whilst the road to the sea wasn’t particularly interesting, the hospitality we received along the way was incredible.  Restaurants would ply us with free food, farmers gave us freshly cut papaya, and we were stopped and asked about our trip by numerous interested locals. 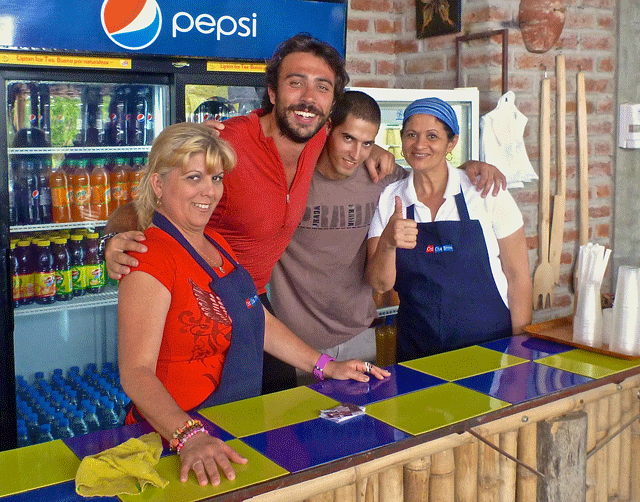 Check out the lovely folks at the Chicharron restaurant on the E40. They plied us with free food and drink. They can have a Bloody Legends too!

Yet somehow, I had managed to dislodge a filling along the way, which forced us to seek out a dentist in Salinas – a town solely inhabited by alcoholic American retirees, whose main activity appeared to be swapping stories of their passionate evenings in the local brothel.  Having no such stories to share, we joined the Ruta Del Spondylus and made our way toward the party-town of Montañita, before heading onwards to Puerto Lopez, a town famous for its whale-watching.

And finds comfort in the arms of a motorcycle gang 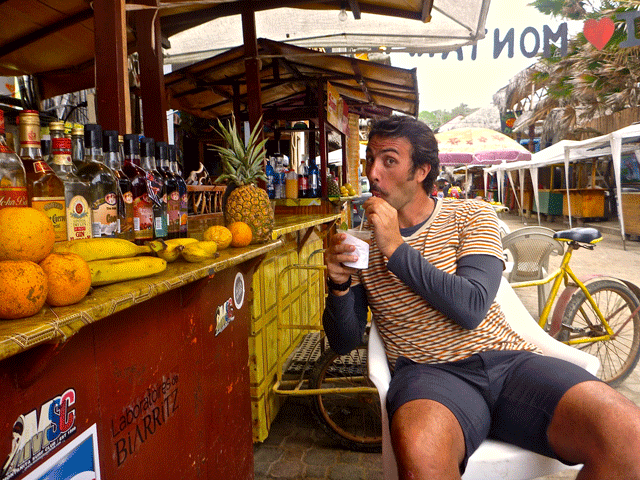 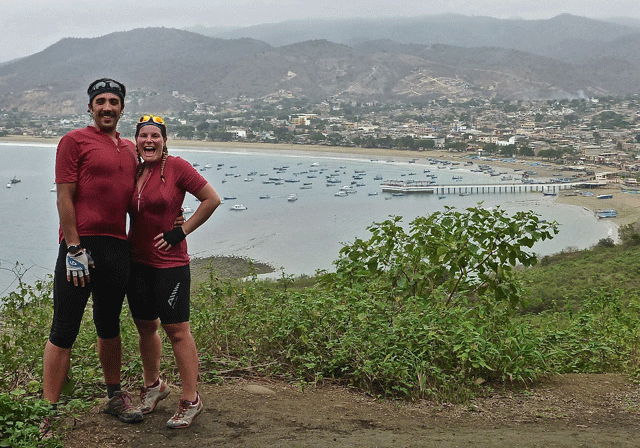 And the view looking down on Puerto Lopez

Sadly, zero whales were spotted, yet the trip also included a 3-hour test of endurance – walking around the desolate Isla de la Plata looking at Blue Footed Boobies.  Quite why the fourteen French people in group chose to go on this epic bird watching adventure we’ll never know, but after saying Boobie for the 82nd time, the joke began to wear rather thin. 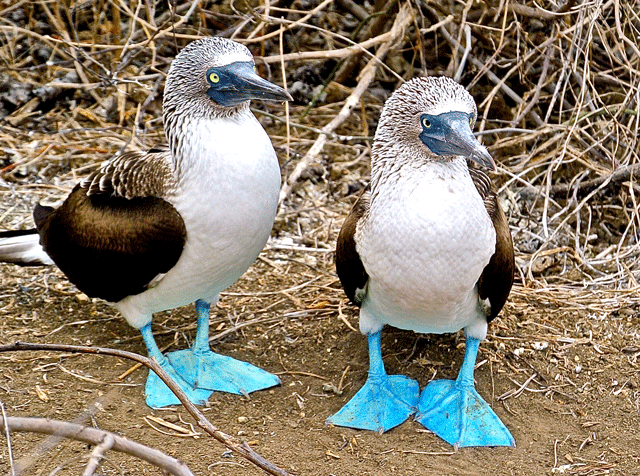 We finished the day off with a little snorkelling, yet there wasn’t really anything of interest to look at, so we occupied ourselves by taking underwater “selfies” with our waterproof camera.  We were a little disappointed at the lack of cetacean action, but continued along the coast toward the city of Manta, where I managed to snap yet another spoke.

The blog wouldn’t be complete without a picture of Mel cycling somewhere. Here she is grinning in front of some Bougainvillea. She did not yet know just how many spokes I had broken at this point

This is yet another in the long line of things I have broken recently, which includes dislodging a toilet, and going through a sun lounger, but breaking spokes is the most frustrating of all, as it normally results in me having to ride numerous kilometres with the brakes on.

A quick Google search has told me that if you are breaking spokes on your rear wheel, it’s usually because there is too much weight, and having found out that it would cost us over $30 a kilo to post excess gear home, it leaves me with only one option. 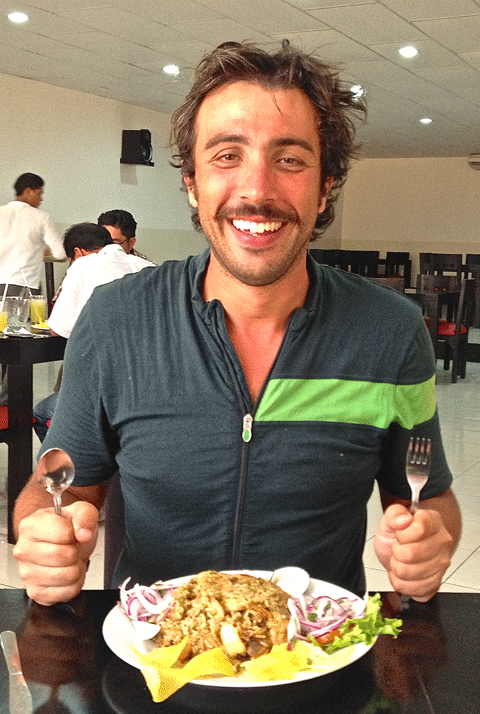 The new diet – seafood and rice. Conveniently out of shot – 2 finished bottles of Coke and a plate of chips

featured
← Previous The one that’s quite brief
Next → The one where Chris finds a friend, but not the Equator