The one that’s quite brief

Aaaaaaaannnnd, we’re still in Peru.  Yes yes, I know I signed the last blog off saying that we’d be posting from Ecuador next time, but we’ve had some unexpected delays. 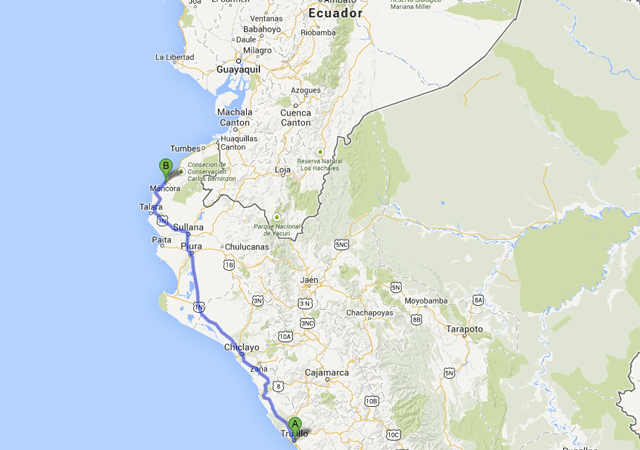 So I’m going to start sticking up maps of the route to show just where we’ve ridden through. How thoughtful

A closer inspection of Mel’s bicycle showed that a child riding it into a tree at 25 km/h would cause more than just superficial damage.  The handlebars were wrecked, the chainring bent, and the expensive front light was smashed to smithereens.  We had heard fanciful stories about cyclists staying in Casa de Ciclistas for way longer than expected (one cyclist stayed at Lucho’s for A YEAR!) but failed to believe them, yet now we were trapped in the gravitational pull of Lucho’s.

Lucho kept odd hours, and worked on the bike sporadically over a number of nights.  Fully a week after the crash, the bike was finally declared roadworthy and we had learnt a valuable lesson – never lend your primary means of transport to a feckless thirteen year-old.  Not only had it set us back a week, it also cost us close to $250 in repairs and new parts. 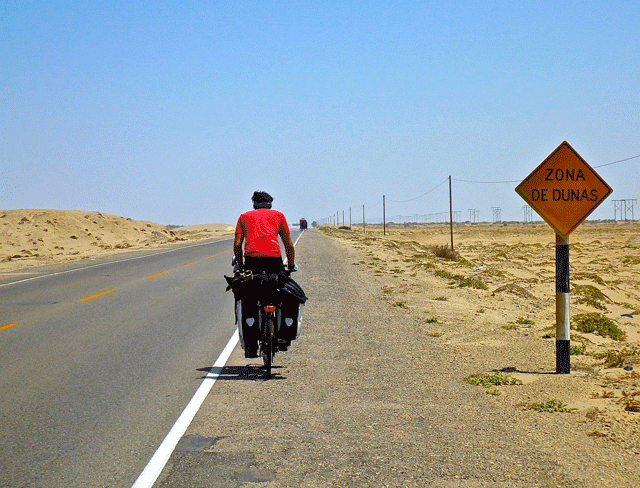 So off we went, with Lucho for protection.  The reason?  50km north of Trujillo lay Paiján, a town notorious for violent robberies of cycle tourists.

Our normal pace of cycling is best described as leisurely, with frequent breaks for drinks, Snickers bars, and the use of the toilet.  This all went out of the window as soon as we left the outskirts of Trujillo.  Lucho steadfastly refused to let us pedal at anything less than 20km/h, drinks breaks were only allowed at his discretion, and if Mel dropped below the required pace, she would be pushed along.  The only competitive advantage we had was going downhill, where flyweight Lucho could not compete with our bulk, and we left him trailing in our wake. 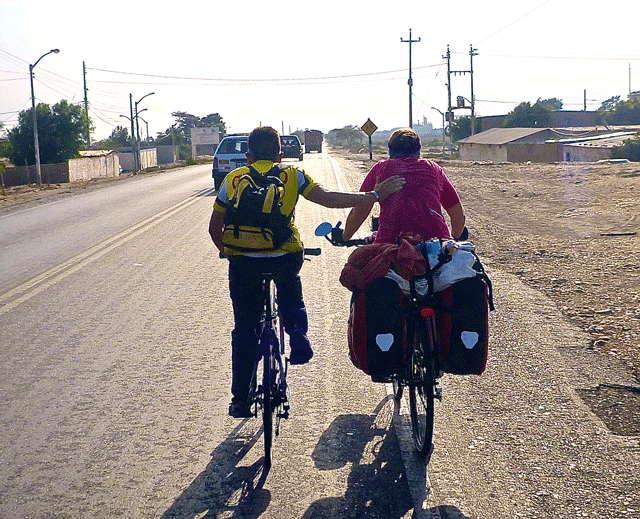 Lucho pushes Mel up another incline. Mel was not enjoying herself at this point

The town of Paiján passed in a blur, as, assisted by both fear and a strong tailwind, we went through at speeds of 40km/h.  Fortunately we never got to see the can of pepper spray Lucho was carrying in action, and such rapid cycling meant that we covered the 110km to Pacasmayo in a little over 4 hours. Fortunately, Lucho had kindly arranged for us to stay at one of his friend’s houses that night.

We had been told that there was space for us to sleep upstairs, so when we returned from dinner to take a look at our sleeping quarters, we were a little surprised to find that we would be sleeping on the roof.  Unperturbed, we bedded down and made ourselves comfortable, only to be awoken at 3am by rain.  A half-hearted attempt at waiting it out was made, but as it became steadily heavier, we had no option but to move downstairs.  I suspect that the family weren’t overly impressed to find two cyclists sprawled all over their living room floor when they awoke that morning, so we made ourselves scarce rather sharpish. 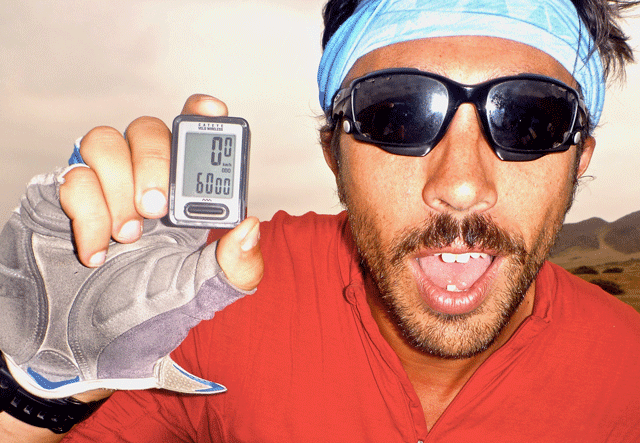 Yeeeeaaaaahhhh! We pass our 6000th kilometre together

On we went, passing the town of Chiclayo, and into the Sechura Desert.  Assisted by an advantageous tailwind, we set a new distance record of 164km in a single day, before spending the next night in Piura, and then getting lost in the town of Sullana.  As we checked our map to figure out just where we had gone wrong, a man in a van approached us. 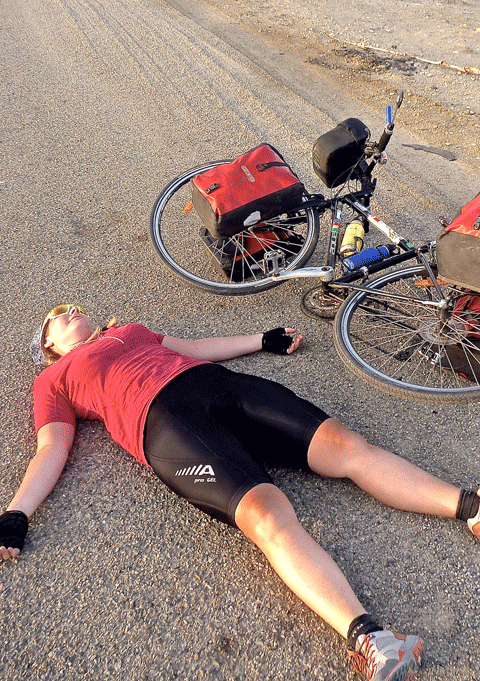 My Spanish, which has improved somewhat, is still not quite good enough to make out whole conversations, so when the natives kick-off with the rapid fire stuff, my default reply is “Si, si, si” (“Yes, yes, yes” for the non-Spanish literate).  As we rode away from the square, the van followed us, and after crossing the bridge out of town, motioned for us to follow down a dirt road. 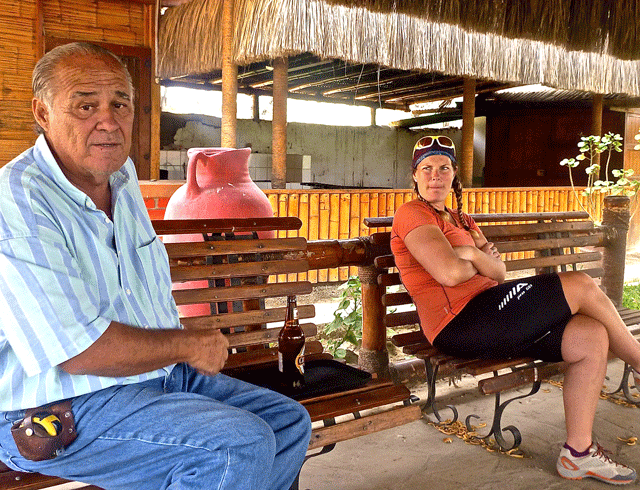 The kindly Pepe, who did a couple of racisms by dropping the N-bomb to describe my dark skin. Mel looks on disapprovingly

It turned out that I had unwittingly accepted an invitation into Pepe’s tranquil home, on the banks of the Sullana River.  He was fascinated by our trip, and took great pride in poking his pet Caiman with a broom for our entertainment.  At 9.30 in the morning he suggested some beers, so we spent a couple of hazy hours in the most tranquil of places.

In spite of Mel’s protestations, we couldn’t stay there forever, so set off again, slightly worse for wear.  And then something bizarre happened.  The Peruvian drivers, who have been the bane of my existence for the last 2 months, calmed down.  They suddenly became courteous, stopped harassing you at every opportunity, and it became almost a pleasure to ride here again. 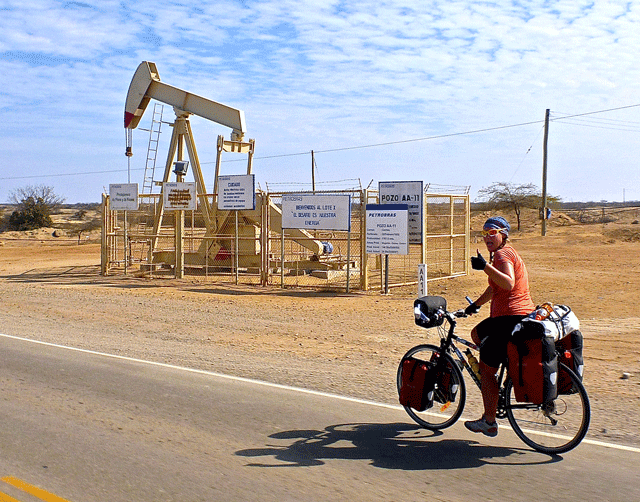 Mel gives the thumbs up for Peruvian oilfields

We rode past nodding donkey’s as we crossed Peru’s oilfields (who knew?), before finally making it to Mancora, where in the stinking heat, we made the odd decision to check into the infamous party hostel, Loki. 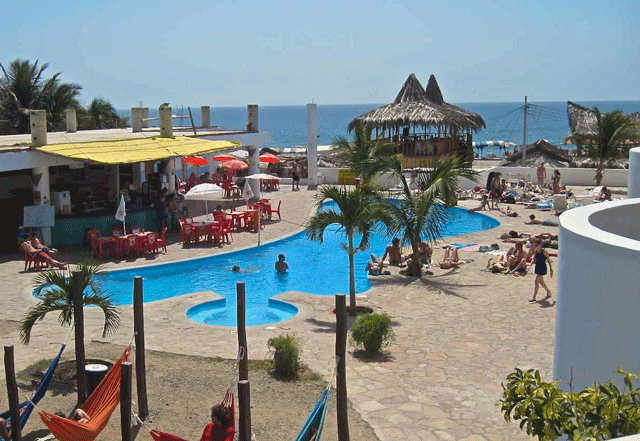 Loki – It would have been great if we were only 10 years younger. This isn’t my photo by the way, it’s shamelessly stolen from someone else’s blog

Being at least 10 years older than your average guest, we hit the bar in an attempt to fit in with the tattooed and pierced cool kids.  It was 1pm.  By 5, we were pissed, at 6 we had the beginnings of a hangover, accompanied by a pounding headache, and by 8 we were tucked up in bed, fast asleep.  We eventually awoke at 4am to the sounds of the youths shouting at each other over the pounding bass of the bar.

Realising that we are far far too old to be staying in the Peruvian equivalent of an 18-30’s holiday, we checked out at 9am the next day, and moved into a more gentile hostel with cooking facilities (we tend to find that hostels with cooking facilities repel youth), where Mel has spent the last week topping up the bank account by working, and I have spent the majority of my time sunburnt.

So with bank account replenished, we hit the road again, this time definitely into Ecuador. 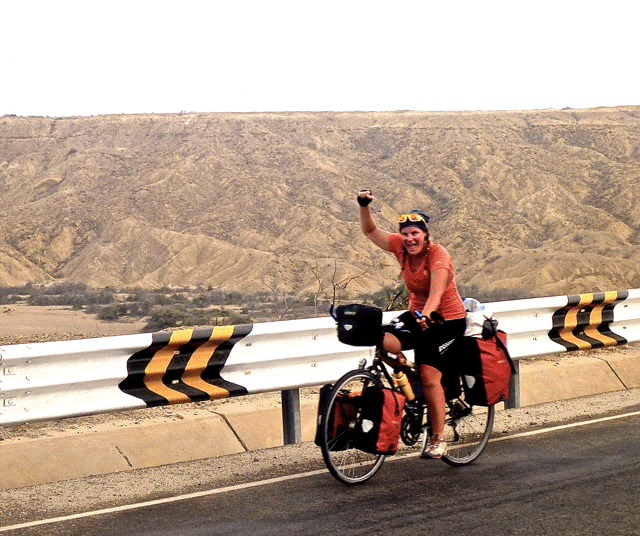 We’ll be out of Peru in two more days.