The one that takes two steps forward and one step back

Having returned to Nicaragua after all the stresses and strains of trying to straighten Mel’s wheel in Costa Rica, we took the opportunity to spend some time on the slightly less stressful island of Ometepe. 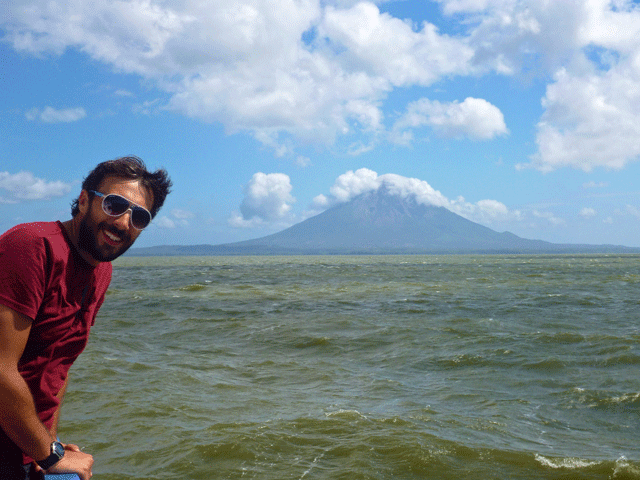 On the way to Ometepe

We were whisked across Lake Nicaragua and spent an idyllic week under the watchful eye of Concepción, one of the two volcanoes that make up the island. Mel had some work to do, and we were fortunate to have discovered a café that not only sold proper coffee, but also served Mel’s favourite breakfast – Eggs Benedict – so whilst Mel got on with the serious business of working, I wasted my life by playing Clash of Clans. 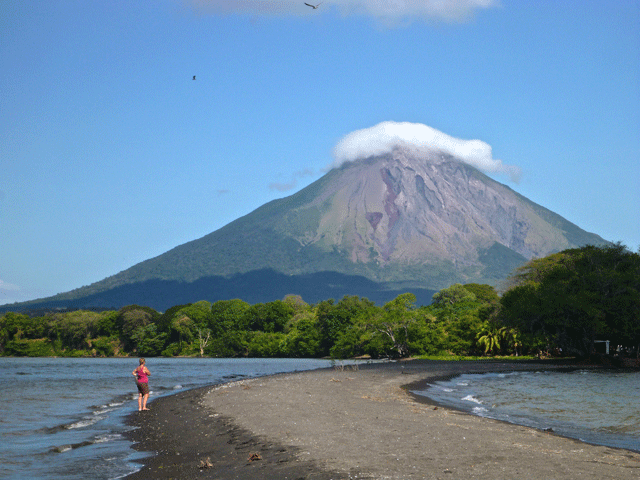 Mel takes in the view of Concepción

With Mel having finished her work, it was time for us to get back on the road and test out the newly rebuilt wheel. We made a mad-dash through the country, avoiding Managua, skipping the other tourist attractions, and dodging the piles of horse shit scattered along the road. 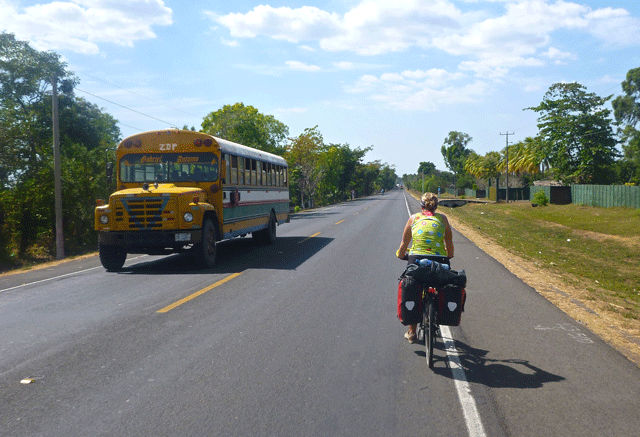 Ever wondered where the big yellow American school buses go to die? Nicaragua is the answer. It appears that they have been taught how to drive the things by Otto from The Simpsons.

With another country under our belts, we left Nicaragua and rode warily into Honduras, a country where in 2011, there were a whopping 7104 murders (the highest per capita in the world). You may question the sanity of cycling in a place like this, and so did we. 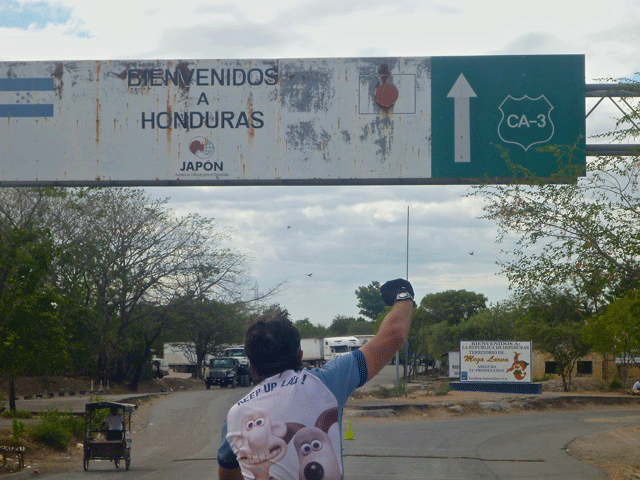 As we entered the country, a number of truck drivers told us of the perils to come, yet after leaving the chaos of the border behind us, we were soon cycling through pleasant farmland. Local children would bellow “GRRRRRRIIIIIINNNGGOOOO!!!” at us as we rode past, and in spite of their murderous reputation, we had no problems whatsoever. If anything, the most dangerous part was probably this.

Still, we weren’t hanging around, and it only took us a day to ride across the country, so as we waved goodbye to Honduras, we said hello to the world’s second most homicidal country  –  El Salvador (4371 murders in 2011). 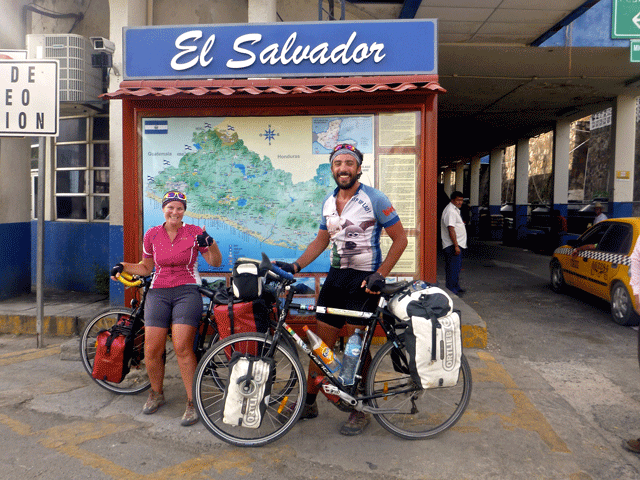 16:22 – February 7th – we introduce Wallace and Gromit to El Salvador

It had been a hectic week. Having ridden for seven consecutive days in three different countries, it was time for a break. We checked ourselves into La Tortuga Verde (The Green Turtle), a peaceful resort on the Pacific coast where cyclists could camp for free, and got on with the difficult business of reading books, lazing in hammocks, and stuffing our faces. The tranquillity was only spoilt by day tripping Salvadorians who got hammered, turned the swimming pool into something resembling an African watering hole, and then drove home pissed. 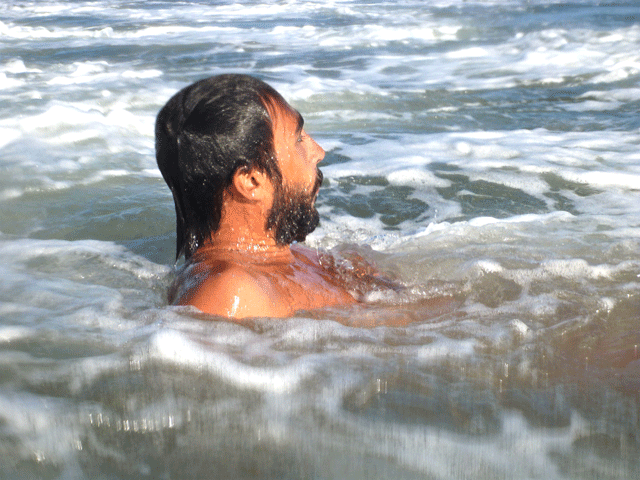 Mel said I shouldn’t put a picture of Salvadorians swimming as that’s creepy, so here’s a slightly less creepy picture of me swimming instead

We had been making good progress, yet as we were due to leave the beach, Mel began to complain of stomach pains. Fearful of a return of the dreaded kidney stones, we visited the public hospital in the town of Usulután, where this happened: 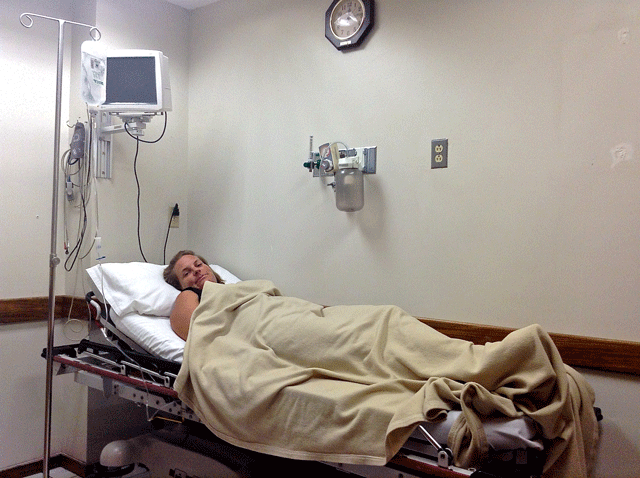 Since when did being on a drip become the default position when entering a hospital?

We’ve visited numerous medical facilities on this trip, and this one, quite frankly, was the most farcical of the lot. The bed sheets were bloodstained, the doctors sat around socialising for the most part and they seemed to take a great pleasure in sending me on errands to fetch drugs for Mel. We waited for four hours for Mel’s drip to finish, at which point the doctors’ declared that she was definitely better, and she was promptly discharged.

With Mel still feeling green, we managed to cycle halfway across the country to the surf town of El Tunco, where, with her symptoms showing no signs of abating, we had little option but to take a bus to the capital – San Salvador – and pay a visit to the best private hospital in town.

This was more like it. The doctors actually appeared to give a shit, and after a number of scans and tests, she was diagnosed with…. 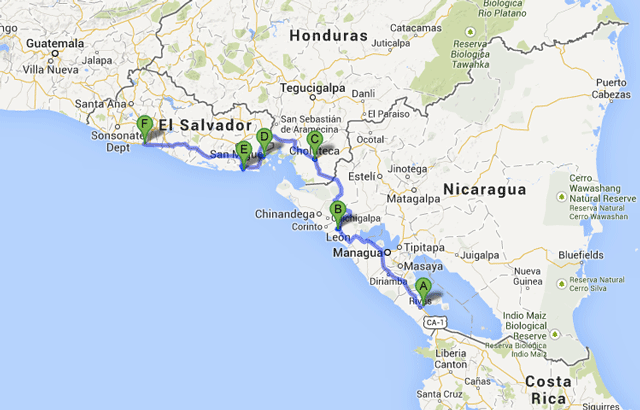 I think I shall put the route here this week

Having been prescribed a week of rest, we headed back down to the coast, but a week later, and with Mel still in considerable pain, we were back at the hospital. This time the diagnosis was inflammation of the intestines, which has led to an enforced stay in San Salvador for this past week. Yet Mel’s condition still hasn’t improved, so once again we’ve been back at the hospital today.

And the latest diagnosis?