The one where we have to call it quits

It’s been a tough and frustrating week for both of us here in San Salvador.

We signed off the previous blog with Mel potentially having a parasite, yet after completing the course of medication, she found herself still in considerable pain, so we had no option but to revisit the hospital.

We were directed to a gynaecologist, who sent Mel off for yet more scans. The results once again proved inconclusive, and after yet another examination, the doctor concluded that the pain wasn’t being caused by endometriosis (click for the gory details), but by something else.

Thankfully, the gynaecologist had arranged for us to be ‘squeezed in’ with the hospital’s gastroenterologist, yet ‘squeezed in’ in Latin America doesn’t mean seeing the doctor in between his appointments like everywhere else, but having to wait for three hours for him to finish seeing all his other patients.

When Mel eventually got to see the doctor, he divided her abdomen into nine sections and asked her where the pain was. When she replied that she had pain in all nine, the doctor seemed rather concerned, and ordered her to have a CT scan.

The next day, after drinking a litre of chalky liquid to aid with the scan, she was placed in the CT scanner. Six hours later, we were back at the hospital. At this point, I think it is best if I hand over to Mel:

“I got the CT scan back. The doctor told me that I have an enlarged spleen and enlarged, but not cancerous, lymph nodes. Coupled with my other symptoms and tests, he has diagnosed me with a tropical disease in my digestive system which will take anywhere between two and six months to treat. I require daily medication and constant monitoring by doctors (basically every few weeks to get medicine dosage right), so the doctor will be recommending to our insurance company that I fly home given the treatment timeframes.”

I have since asked Mel for the name of the disease, but she was so taken aback by the diagnosis, that she didn’t catch it! 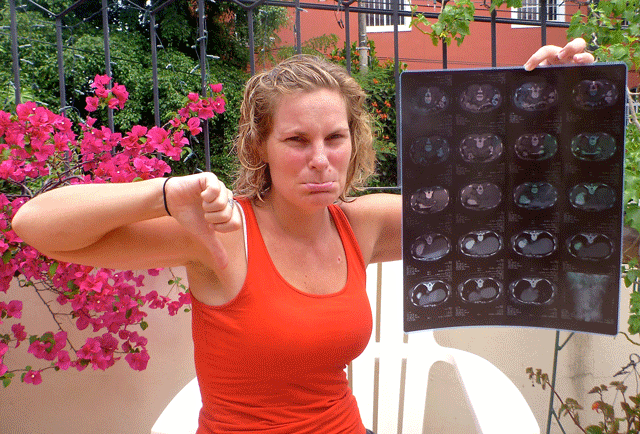 So now we wait. Firstly until Monday, when we return to the doctor to get a full diagnosis and Mel’s case notes, and secondly for our insurance company, who are beavering away behind the scenes to see whether Mel will be repatriated.

Thinking back now, the only explanation we can think of was that Mel picked something up whilst swimming in Lake Nicaragua. The symptoms began fully a week after her last swim in the lake, which seems like an adequate incubation time for whatever is currently terrorising her intestines.

I’d like to thank you all for your messages of support on Facebook and Twitter. It has been a trying period for both of us, especially after seeing Mel going from being able to cycle 100km a day, to barely being able to get out of bed.

As soon as we get an answer from our insurance company, and the full diagnosis from the doctor, I’ll do another update, but for now I suppose it’s time for the big question.

Does anyone want to give us a job?