The one where Mel drops the C-bomb, and Chris gets sick

We consulted our bicycle repair guide at the Chilean border post, which advised us to “play with the barrel adjuster and the two limit screws”.  With two blank faces we twisted some parts of the mechanism, all of which made absolutely no difference, so Mel pedal-clunked all the way to Trevelin, some 40 kilometres away.

Trevelin, founded by Welsh settlers in 1889, was rather pleasant, and whilst the town’s bike shop serviced Mel’s bike, we spent the rafting money on Corona’s in a local bar.  With the bike again running smoothly, we set off in the blazing midday sun towards Los Alerces National Park.  With blue skies above us, and good roads below, we were on fine form, so much so, that we belted out Bonnie Tyler’s Total Eclipse of the Heart.  Whether it was the sun or the singing, Mel began to complain of feeling a little dippy so we camped early.  The next day she feigned some illness that I was too tired to argue about, so we took another day off. 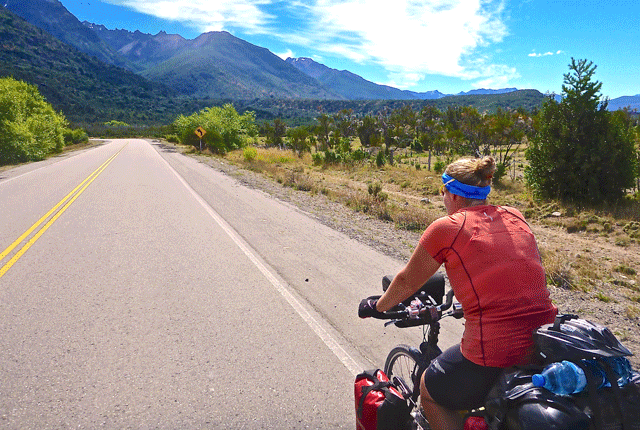 “Turn around, bright eyes” – on the way to Los Alerces National Park

We awoke to a gloomy morning, but were keen to get moving again, so packed up and rode through the park.  Having subsequently read the Lonely Planet, the park was set up to preserve the Alerce trees, some of which are over 3,000 years old.  I suspect we wouldn’t have noticed trees that were 3,000 years old (if left to their own devices, don’t trees live indefinitely anyway?) but we did see the beautiful lakes Futalaufquen 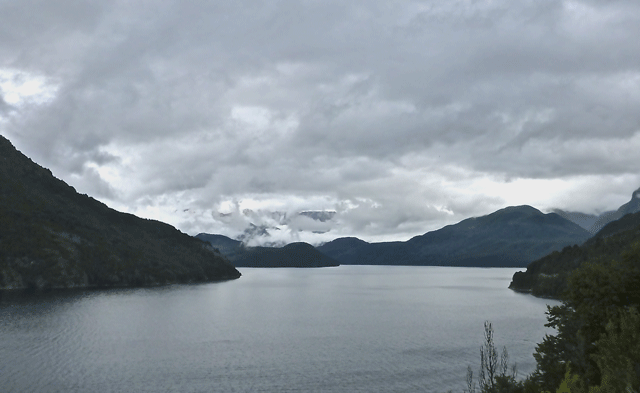 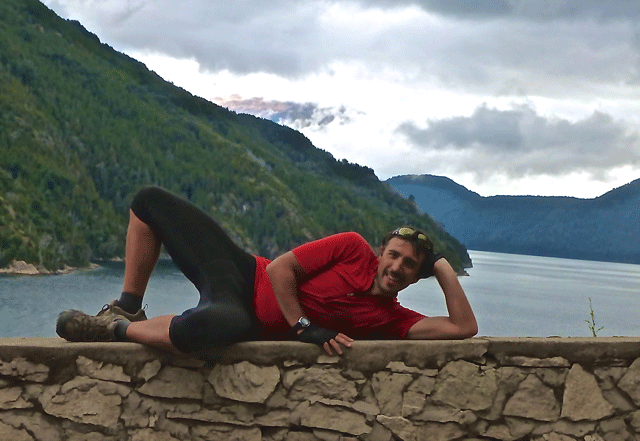 Which Chris decided to “sex up” 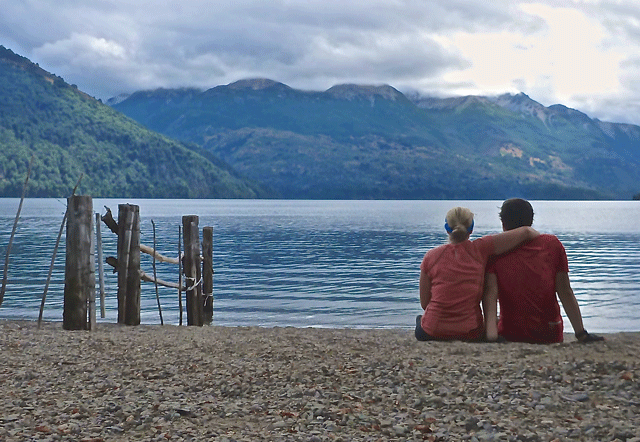 A puncture brought an end to the day’s proceedings, which conveniently coincided with a park ranger station and therefore, a free campsite.   After sleeping through a huge thunderstorm, we cycled out of the park, only to be revisited by Mel’s bike problems again.  The conversation went as follows:

Chris – “Thanks, but it’s your bike, and therefore your problem”

That rest of the day’s cycling was conducted in silence.

We were back on Ruta 40 (we had already ridden an unpaved section of this road, somewhere outside of Puerto Natales), but we now had a cyclist tourers’ dilemma – do we prefer the quiet unpaved roads, where the going is slow but undeniably safe, or the smooth asphalt and the demented Argentinian drivers?  Well it was downhill and therefore fast, so we’ll say the latter for now.  We stopped for a night in Epuyen (don’t bother), before heading on to the town of El Bolson. 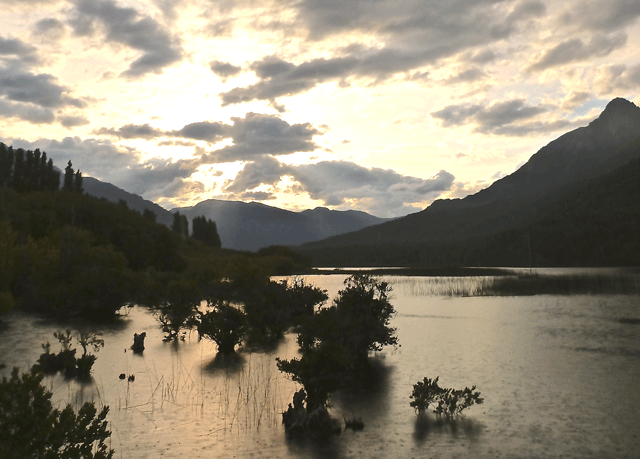 The sun goes down over Epuyen

We were delighted to find out that El Bolson had a campsite at a brewery, so made a beeline straight for it.  The news that they threw in a “free” beer when checking in was met with smiles, until we reviewed the price list which showed that camping with a “free” beer cost 45 pesos, and without said beer, 38.  We rode into town to try and fix Mel’s bike again (turns out she has a stiff link on her chain.  How inept are we not to notice that?), but with it being between the hours of 1 and 5 in the afternoon, the town had shut down for siesta, so we followed the smell of weed and incense to the Saturday market.

The market peddles the tat wares produced by the town’s hippies, who seem to base their look on the Jedi in the new Star Wars films.  I sloped around the market, looking like a man in TopShop on a Saturday afternoon, but was delighted to find a number of stalls selling (pay attention shopping centres) premium strength local ales.  I was rather pissed by the end, and thus completely oblivious to the crystals and crap on display, although Mel did tell me that one stall appeared to be selling “knotted rags”. 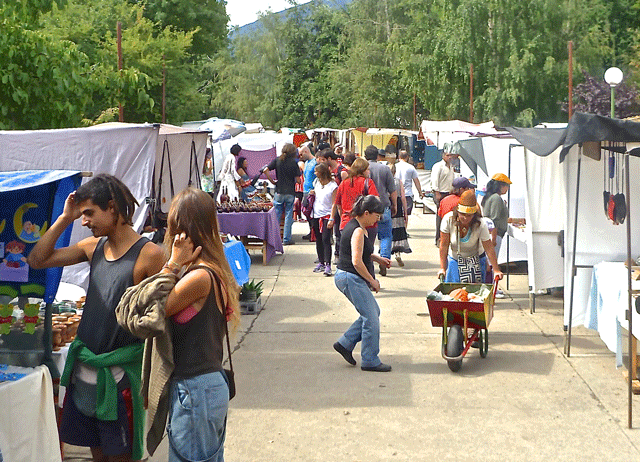 The next day, we were up early so as to avoid the Argentinian drivers, who drive as fast, and as close to the vehicle in front as possible, all with a complete disregard for the Highway Code.  Thankfully, cars will often give you plenty of room, however buses steadfastly refuse to cross the centre line, so will drive as close to you as they can.  Not a pleasant experience, and we have taken to riding on the gravel shoulder when these idiots approach.

The 8 hours of cycling that day were spent doing the following – climb for an hour or so, 10 minutes of rapid downhill to the same level you started at, repeat.  Looking at the stats from my bike computer, it appears that we climbed over 1400 metres that day, culminating in a final climb that lasted for an hour and 45 minutes.  It was just as we rounded the final switchback that Melanie said “I’m actually amazed that I’m able to do this”, which I think shows just how far we’ve come since tottering out of Ushuaia nearly 3 months ago. 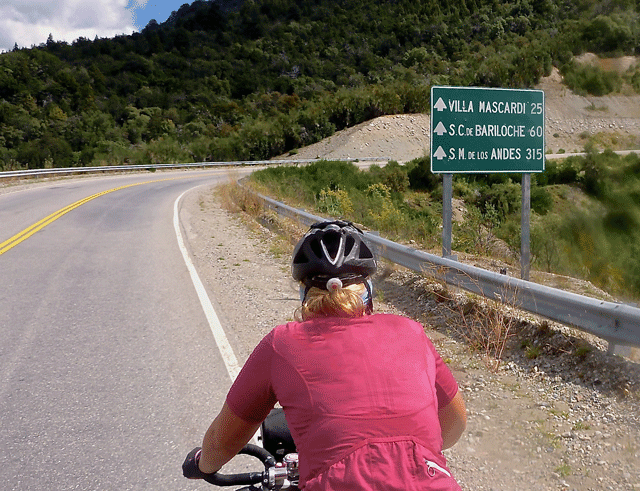 “I’m actually amazed that I’m able to do this”

Exhausted, we camped at Villa Mascardi, before covering the remaining 35km to Bariloche the next day.  People had told us that it was “very touristic”, but it didn’t appear that way as we cycled past the dump on the town’s outskirts.  However, as we rolled into Bariloche, we discovered that we quite like touristic, if touristic means McDonald’s (judge all you like), and went straight in to stuff ourselves with Big Mac’s. 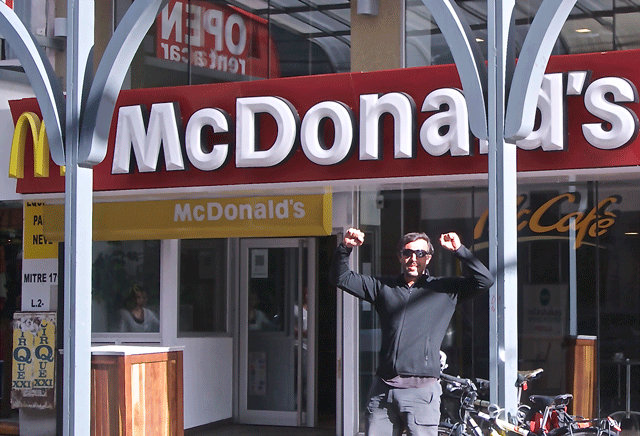 I’m not actually wearing any underwear in this picture

However, the joy of hamburgers has been tempered by the fact that my digestive system is now absolutely roaring (I know exactly what’s caused this, fucking La Anonima salami), so I write this blog feeling nauseous and bloated, whilst doing trumps that would surely kill a man.  Sound familiar?

I now know how Mel feels.