The one with a bloody scorpion in it

I signed off the last blog feeling rather sorry for myself, and having seen how utterly debilitating Mel’s illness had been, I was in no mood for messing around.  An American girl whose name I have shamefully forgotten (if you do read this guff, then please do get in contact and we’ll send you a postcard to say thanks), had kindly given us a course of antibiotics in Puyuhuapi, which I gladly got stuck into.  Unfortunately, the antibiotics made me even grumpier than usual, whilst any form of exercise left me exhausted.  As such, Mel’s suggestions of visiting Bariloche’s numerous attractions were swiftly rebuked:

Mel “Do you want to go to Dinosaur World?”

Mel “How about we go on the luge?”

Mel “What do you want to do then?”

After 3 days, 15 visits to McDonald’s (in our defence, it also had a McCafe, so it wasn’t just Big Macs), and the latest Die Hard movie (avoid), the campsite officially closed so we were back on the road again.  As we left town, I pulled my sunglasses from my jacket pocket only to feel something hit my foot.  It turned out that the thing hitting my foot was the arm of my sunglasses, so a fruitless thirty minutes was spent scouring the roadside bushes on our hands and knees.  Now sunglassless, we stopped to buy some replacements, which make me look like – well I’ll let you decide… 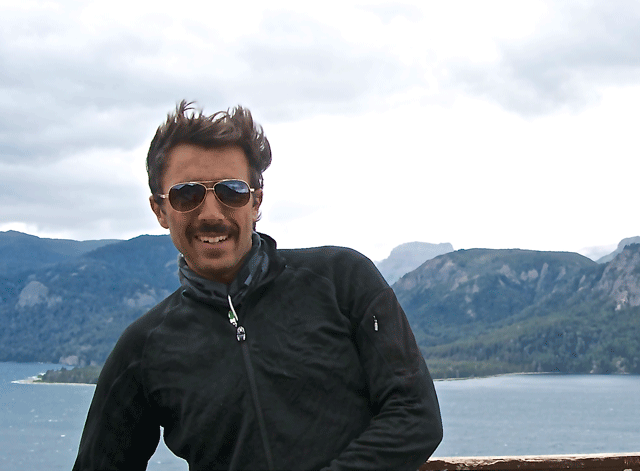 Our Dutch friends had suggested a route to San Martin – avoid the paved, but traffic-laden Seven Lakes road, but take the quieter yet unpaved route to Traful.  As we’re too lazy to plan our own route, this seemed like a good idea, however ten minutes after turning onto said road, Mel had fallen off.  Twenty minutes later we were caught in dust storms that my new Aviators were woefully inadequate for.  The whole day a headwind pummelled us mercilessly, so we managed just 30 kilometres in 5 hours.  After finally making it to Lake Traful, your sandblasted cyclists were hit with winds so strong that it felt like we were standing in a wind tunnel.  Mel is adamant that her bike was nearly blown into the lake. 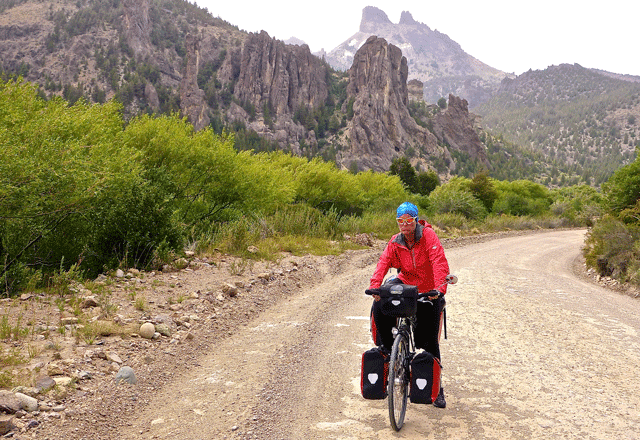 If Mel doesn’t look like she’s enjoying herself in this photo, that’s because she isn’t…

Cold and utterly fed up, the sight of a campsite with hot showers boosted our spirits.  As Mel began to quickly unwrap the tent, I suddenly heard “OHMYGODITSASCORPION!!!”  Of course, anyone’s first reaction to this news would clearly be to take a photo for their blog, at which point the scorpion began to run, whereupon my second reaction was to panic and hit it with a hammer.  It exploded. 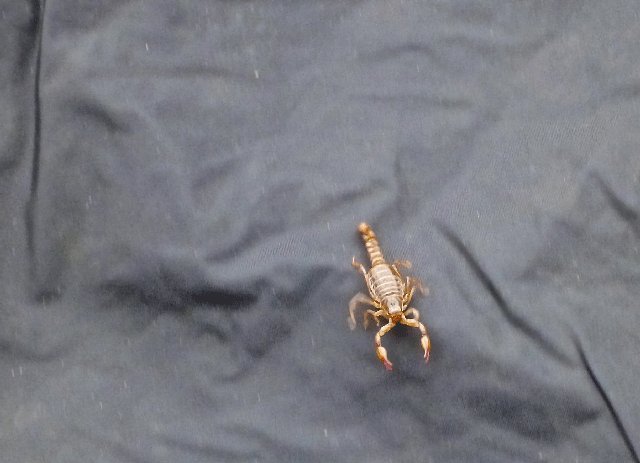 With the crisis averted and the remnants of the scorpion stuck to the bottom of our tent, we slept before making our way in the direction of San Martin.  Having pulled into a layby to look at yet another waterfall, we were joined by a coachload of pensioners.  The waterfall captivated their attention for all of 15 seconds before we were spotted and surrounded.  Cue a throng of over-65’s clamouring for our attention by squeezing biceps and hugging us, all whilst taking numerous photos.  All of this eventually culminated in not one, but two rounds of spontaneous applause for your dishevelled duo.  We cycled off with huge grins on our faces, and the rest of the day flew past. 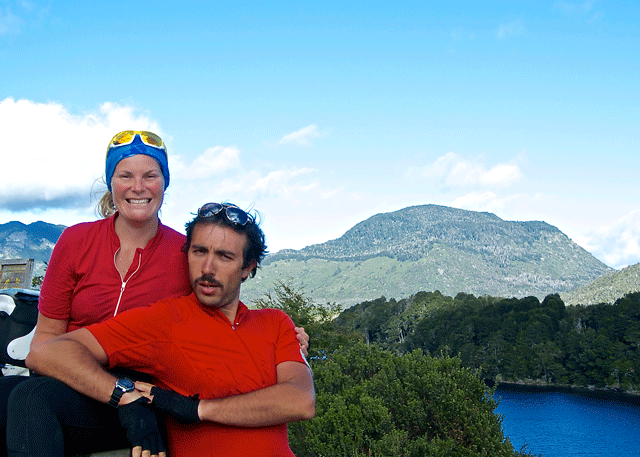 Seconds after this photo was taken, we were surrounded

Whereas Bariloche was a little grimy, San Martin was a lovely little town.  Immaculately kept and serving fantastic food, we were sad to leave, but as this is supposed to be a bike tour, we headed off to cover the 40km to Junin under grey skies with a permanent soundtrack of icy drizzle and bitter winds.

We weren’t intending on staying in Junin for any longer than a day, however after a round of dubious chicken meatballs, I spent the night with chronic wind (from both ends) which eventually forced Mel into the other room (it was going to be -2°C that night, so we opted for a hotel over the tent).  With a stomach so distended I could have been in the supporting cast of Band Aid, Mel marched me to the hospital, whereupon I was diagnosed with inflamed intestines (at least that’s what I think the doctor said), and prescribed some pills, all of which cost us nothing.  Thanks Argentina!

Fortunately, whilst in San Martin, Mel had been in contact with her previous employer, who had generously offered her some work to do whilst on the road (get this reader – feasibly, we could be on the road forever.  Imagine that!), so whilst I recovered by watching Champions League football, Mel slaved away at the computer to pay for our accommodation.  For once, the drugs actually worked so we were soon on the road, heading toward the Chilean border for the umpteenth time. 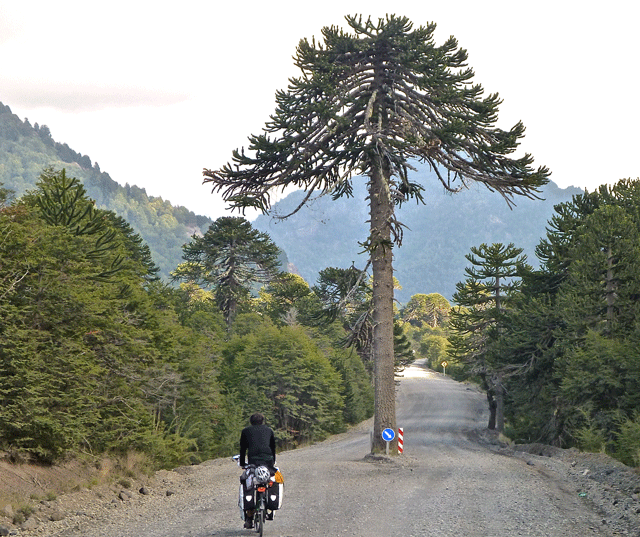 Why not just cut the thing down?

As the road climbed, monkey-puzzle trees became more ubiquitous, and the road turned to gravel of the volcanic kind (sigh), but soon enough the awe-inspiring Volcano Lanin came into view.  Standing at over 3,700m tall, we pedalled in its shadow for most of the day, finally camping beside it at a national park campsite.  With the volcano shrouded in early morning mist, we were first across the border the next day, and realised that we may not return to Argentina again on this trip.  However, these thoughts were soon forgotten as with a paved road and blue skies, we gunned it all the way to Pucon. 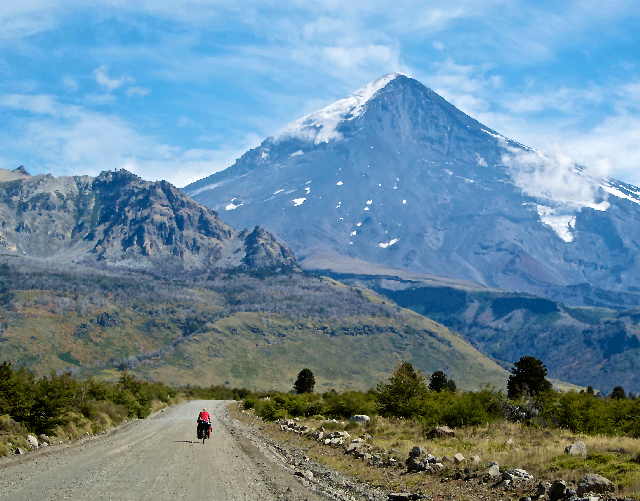 Obligatory photo of Mel cycling toward something – this time Volcano Lanin

Pucon, a town at the foot of an active volcano – Villarricca, has a dizzying array of life-threatening activities ranging from skydiving to fly-fishing.  Being the high octane, adrenalin junkies that you all know and love, we chose the most death defying of them all – thermal spas.  Risking life, limb, and wrinkled fingers, we sat in pools with waters as warm as 41°C, for up to 40 minutes at a time.  It even rained! 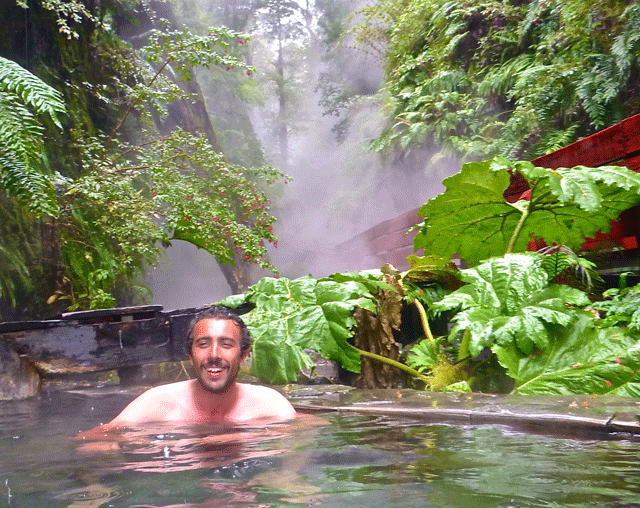 However, the rest and recuperation sadly took its toll on Mel, as once again, her bowels packed in, and we found ourselves in yet another hospital, fortunately finding a doctor who spoke English!  Having explained that the problem has been going on for a while (8 weeks), that yes, as cyclists, we often have no choice but to drink from rivers and streams, and yes, we have taken Ciprofloxacin, the doctor prescribed an injection in Mel’s backside, a course of even stronger drugs, and said that if this doesn’t work, then she may have a parasite.  (If there are any doctors reading this, please do get in touch and tell us what we can do to put an end to this saga.  This is supposed to be a cycling trip, not a tour of Patagonian medical institutions).

With Mel needing to be within 10 metres of a toilet at all times, she was unfortunately unable to undertake the challenge of climbing Mount Villarrica, so it was left to me, the one with zero balance and a crippling fear of both heights and edges, to fly the flag.  Our group arrived at the foot of the mountain before sunrise, and we were whisked over the lower slopes by a chairlift before beginning the climb.  After an hour the gravel gave way to the ice field, and we were handed an ice axe and fitted with crampons.  Suddenly things became serious. 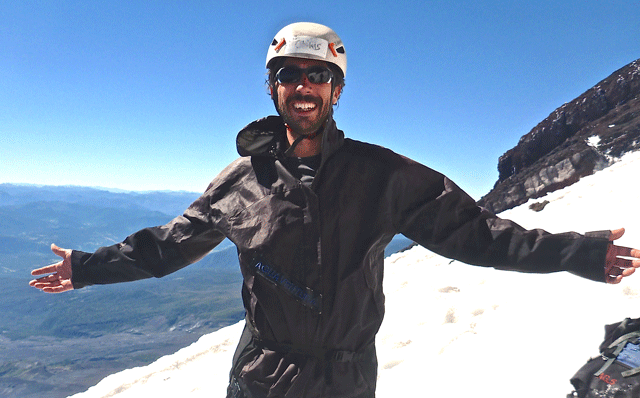 That’s not the smile of someone that’s enjoying themselves, that’s utter terror

Our group crossed the glacier in complete silence, and as the ice turned to snow, the only sounds to be heard were crampons cutting into the ice, and the endless stream of unintelligible Spanish coming from our Chilean guides. Terrified of falling, I was entirely focussed on the feet of the person in front, and after an indeterminate amount of time, and to my great relief, we finally made it off of the snow.

With the summit now in sight, the smell of the noxious volcanic fumes became more pronounced.  As we hauled ourselves over the solidified lava, the chlorine gas began to sting both lungs and sinuses, and breathing was becoming increasingly difficult, but as we clambered up onto the craters edge, it all became worth it. 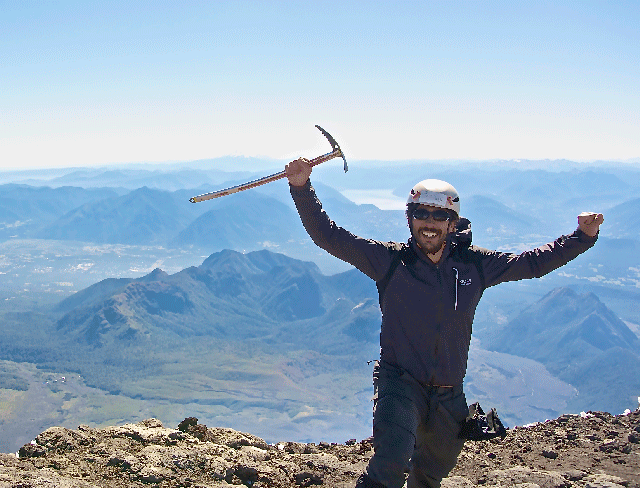 After the obligatory photos, we were soon headed back down, although this time on our bums, as the snowfield was covered in numerous sledding trails.  Unfortunately, my size 15 feet proved to be a curse, as without the crampons I struggled to stay upright.  As my group marched off, I inched my way down the mountain, hunched over my ice axe that had become a makeshift walking stick.  Finally off the snow, we made our way to the bus and back to Pucon to tell Mel all about my adventures.

Needless to say, I won’t be attempting Everest any time soon.

featured
← Previous The one where Mel drops the C-bomb, and Chris gets sick
Next → The one with incredibly dull photos