The one with sabotaged bikes and a sickly girlfriend

“Hey guys, I fixed your bicycles,” proclaimed a beaming Carlos as we walked into his workshop in Santiago.  “I even took apart the hubs, but couldn’t get into the front ones.”  We thought it a little odd that he spent so much time trying to dismantle something that shouldn’t be taken apart (our front hubs are sealed dynamo units), but he appeared to know what he was talking about, so we handed over our cash, loaded them up, and made our way through the chaotic northern suburbs of Santiago. 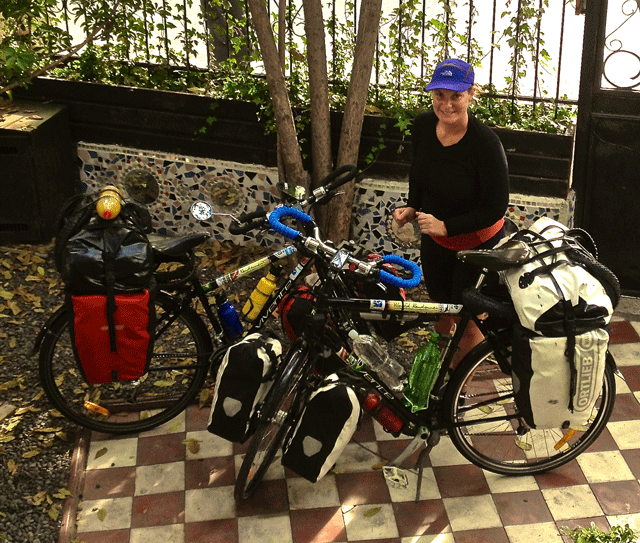 Mel stands by our newly “serviced” deathtraps before leaving Santiago

We were headed north on everyone’s favourite Ruta 5, and it felt good to be back in the saddle.  Yet as the first day progressed, Mel began to complain that her gears were slipping and that the bike didn’t feel right.  The next day, just 100km from Santiago and with the problem worsening, we took an executive decision to divert to La Calera in an attempt to find a bicycle mechanic to look at the problem. 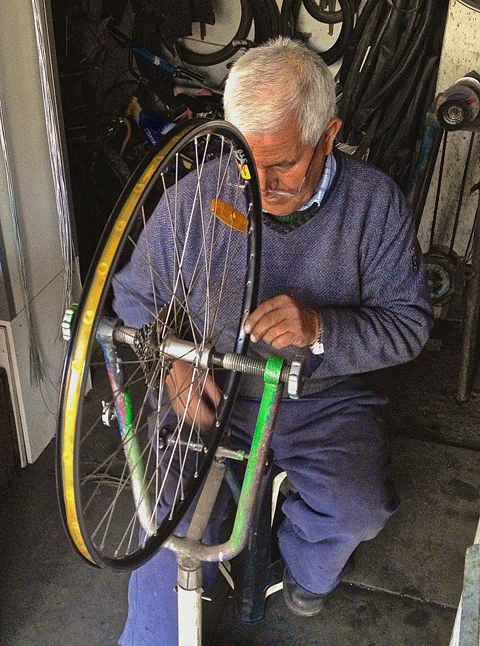 Chris gets his wheel trued. Thanks for omitting that bit Carlos

Arriving in any small town in Chile at midday is always frustrating.  Siesta begins around lunchtime and ends some time between 3 and 5, so after locating the workshop, we checked into a hotel that smelt of grease, and waited for the locals to wake up.  After a quick look at my bike, the mechanic found that I had been riding with my brakes partially on, and the new wheel that Carlos had fitted hadn’t been trued.  After correcting the shoddy work, it was on to Mel’s mysterious problem.

The mechanic twizzled and twirled pretty much every part of the drive train, all of which failed to correct the problem, and it soon became clear that this was something that someone more used to changing inner tubes wouldn’t be able solve.  We were recommended another mechanic in Vina Del Mar, so after the obligatory argument about taking a bus, we hopped aboard, and a couple of hours later we were slung off into the pouring rain, closer to Valparaiso than Vina Del Mar (we somehow managed to miss the five stops in Vina Del Mar).

We took the bikes in to the mechanic and it soon became clear that the work we paid for in Santiago was non-existent.  The mechanic looked at our “new” chains and declared that they had done roughly 4000km, not the 110km we had covered from Santiago.  Carlos had well and truly ripped us off.  They offered to replace the chain and cassette on Mel’s bike, and after collecting the bike an hour later, the problem appeared to have rectified. 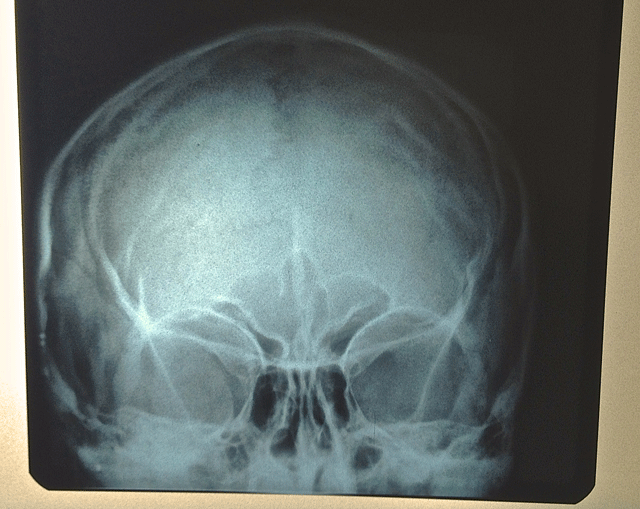 What other blog brings you xrays of one of the protagonist’s faces? Mel’s sinus infection

With Mel’s bike in full working order, we would surely be on our way the next day, yet as we headed to our dorm bunks (yeah, separate beds.  That’s how we roll these days) that night, Mel complained of feeling fuzzy headed.  After failing to address the saga surrounding Mel’s bowel movements that has featured so heavily in this blog, we decided to nip this one in the bud, so visited the doctor who diagnosed her with an ear infection.  Three days of antibiotics and rest later, and there was little sign of improvement.  Trudging back into the medical centre, the doctor ordered Melanie’s face to be x-rayed, and gave a revised diagnosis of a “massive sinus infection”.  We weren’t going anywhere anytime soon.

Stuck in Vina Del Mar, which is Chile’s equivalent of the Gold Coast, is pleasant enough for a day or two, yet its attractions are somewhat limited.  Fortunately, Mel picked up some work so I busied myself by taking the occasional stroll along the beachfront, and also visited the Fonck Museum, which houses a Moai, some shrunken heads, and quite possibly some of the worst taxidermy I have ever seen. 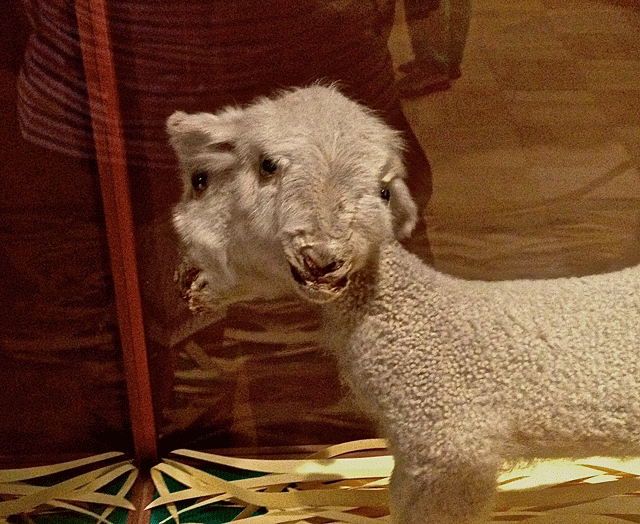 Four days and half a course of antibiotics later, I awoke to see a Mel clad in her clingiest lycra.  Declaring herself fit, we were soon riding under cloudless skies along the coastal cycle path toward Concon, but after our sojourn to Rio we weren’t quite as fit as we once were, and 50km later, we were shattered. 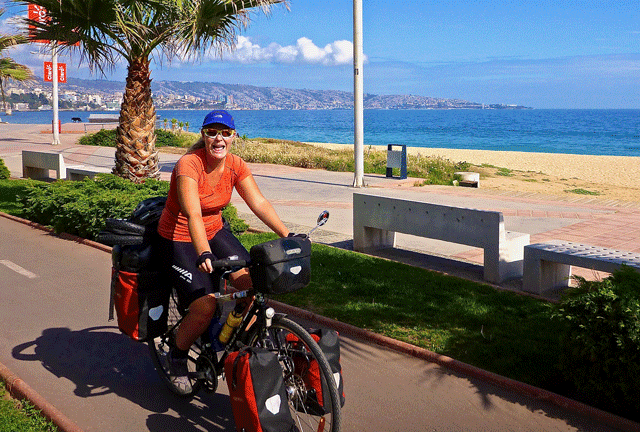 A fit and healthy Mel pedals away from Vina

Pulling into the seaside town of Horcon, we were looking for a camp spot for the night when a beat-up Nissan Sunny pulled alongside us.  Patricio introduced himself and invited us to his home, and proceeded to offer us marijuana, dinner, and a roof over our heads for the night – an offer we could hardly refuse.  He was having some friends over for a party later on, and what with us being the party animals you all know and love, we found ourselves in bed exhausted by 9pm. 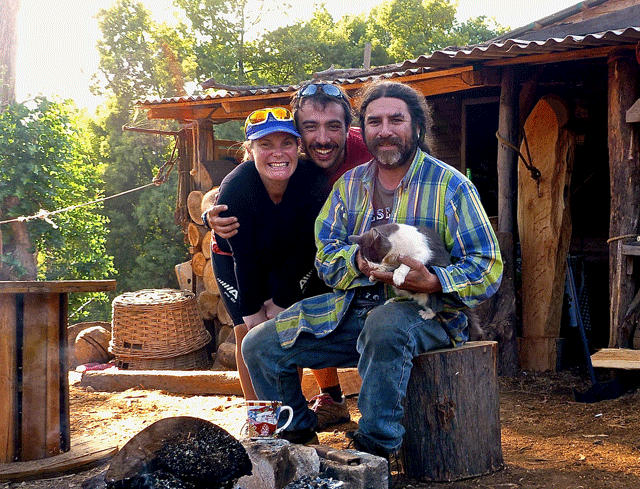 Patricio – he kindly let us stay in his house. Bizarrely, he spent the whole evening scaring the flea-ridden cat away, only to pick the thing up as we were about to leave

The next day, as Patricio cleared up the previous evenings excesses, we bade him farewell and headed along the glorious coastal road to Papudo, where we spent a night in a B&B, before setting off to join Ruta 5 again.  As we worked our way north, the fertile fields that we rode through south of Santiago were a distant memory, and the landscape became increasingly desolate.  With rocks, cacti, and wind turbines for company, we struggled along the undulating road, where our days were spent climbing spiteful hills with gradients between 7% and 10%. 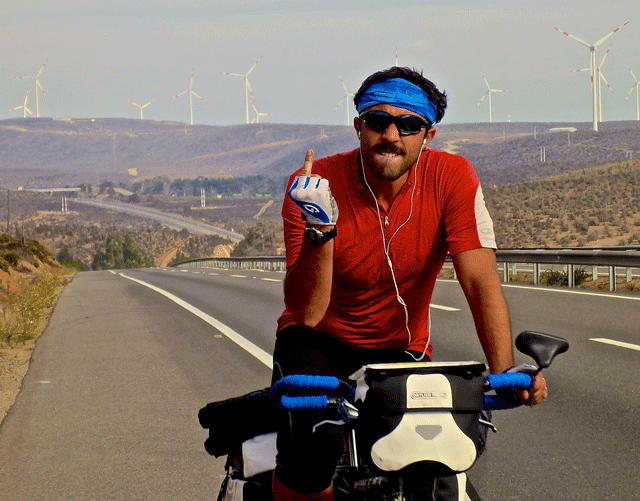 The hills were taking their toll on both of us.  Mel’s knees were a constant source of discomfort for her, causing us to cut several days short due to the pain.  I was beset by technical difficulties, most of which were caused by Carlos, who had unfathomably removed the guard that sits between my rear gears and the spokes, so as I changed into my lowest gear, the chain would slip off the cogs and into my spokes, causing me to have to dismount and put the chain back on.  As you can imagine, this is most helpful when you’re slogging up steep hills.  Thanks Carlos. 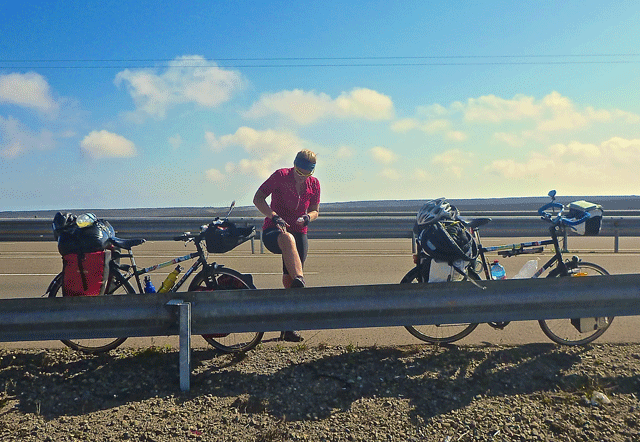 Mel attends to her knackered knees atop another hill

Free camping opportunities were limited along Ruta 5, as the fields were fenced with barbed wire.  Fortunately, every 50km or so there were facilities provided for truckers.  Pedalling from one rest area to the next, we would camp on a patch of sand away from the trucks, before using the excellent free showers and then chowing down on the not so excellent food.  In all, it took us 6 days to cover just over 400km to La Serena, passing the 4000km mark along the way.  Upon arrival however, Mel declared that she had yet another problem – toothache. 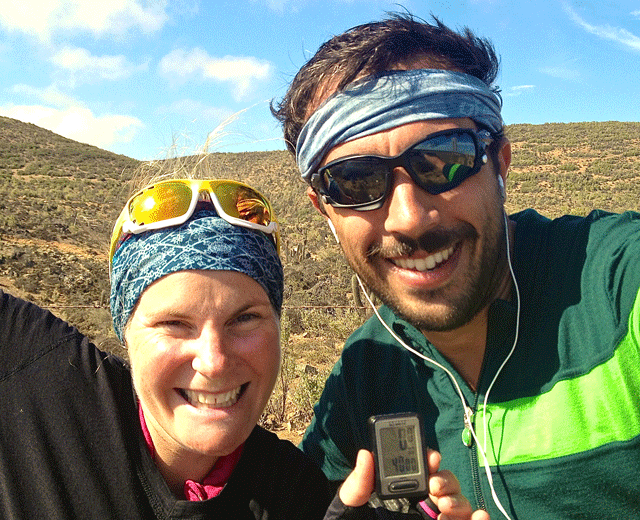 After a brief visit to the dentist, where she had half of her tooth removed and filled, we were instructed to return again on Monday, where they would fit a crown to her busted molar.  At least that what we thought the receptionist, who spoke quicker than 90’s rapper Snow, said.  We turned up bright and early only to be told that the specialist only works on Thursdays, and the next time we can see him is in 10 days time.  This was the straw that broke the camels back. 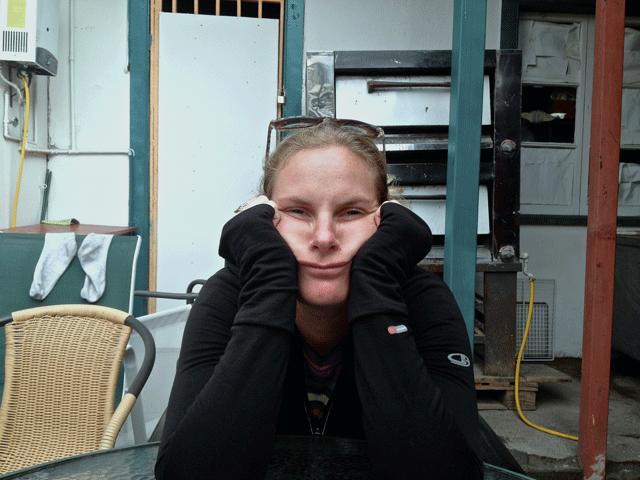 Mel during one of her ailments

Chile is a beautiful country only let down by its dreadful food (sorry Chileans), and I would encourage all seven of our readers to visit, but we’ve spent more than enough time here, and the thought of spending another week and a half in a town with little to do, sent me into a fit of rage.  As I skulked around the hostel, I remembered Gabriela.

Gabriela runs a bike store here in La Serena, and I had popped in looking for new inner tubes.  A former pro mountain biker, she had grown up in Canada, and we were discussing our trip and Mel’s toothache.  She had mentioned in passing that her Mother-in-Law was a dentist, so after explaining our predicament to her whilst waiting for my bike chain to be replaced, she was more than willing to help.

Luckily, we were to be seen that evening, and after a brief consultation, it was decided that the tooth could be filled, negating the need for a crown.  An hour later and Mel walked out with a numb mouth, and a full complement of teeth.  Crisis over, we celebrated with dreadful Chinese food and hope to be back on the road again on Wednesday, the question is:

Which part of Mel will fail next?