The one with the big yellow truck in it

After a night spent stargazing at the Mamalluca Observatory, it was time to move on from La Serena.  A glance at the map and the premise was simple – there are no tourist attractions, so all we had to do was ride 900km north to Antofagasta. 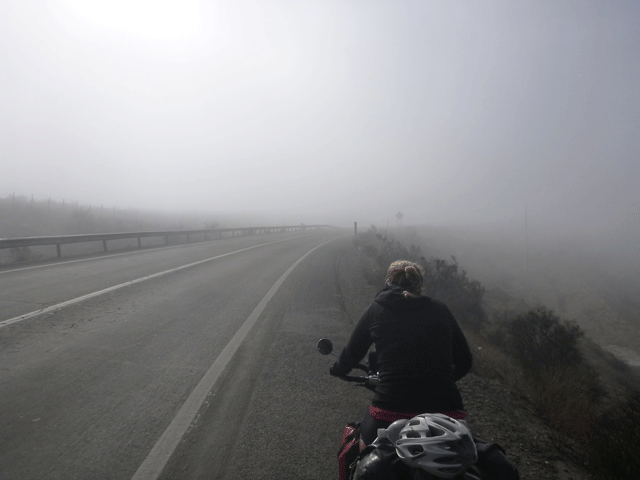 As we made our way along the fog covered coastal road from La Serena, the road eventually veered inland.  After a couple of hours climbing some nasty switchbacks, the sun shooed away the cloud and we entered Chile’s III Region – home of the Atacama Desert. 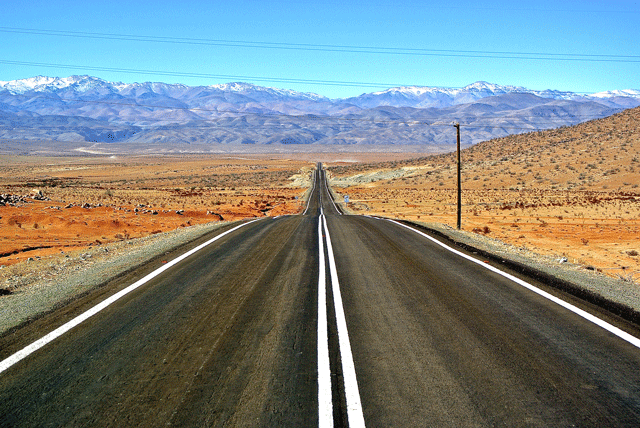 Turn right some time after the hill. Desert roads are straight as an arrow, unlike the centre lines 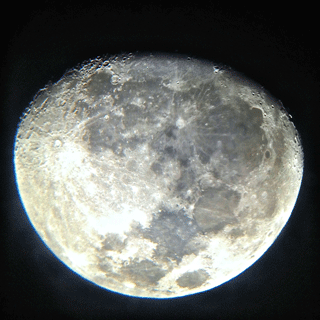 Alright, so this wasn’t taken from the tent but it’s in the sky at night

Under the bluest skies we have ever seen, the litter-strewn road stretched for miles.  We stopped for lunch at a dusty rest stop where a truck driver who worked for Coke approached us.  After telling him of our plans he handed over 6 bottles of water.  Camping that night, we drank the fizzy water mixed with powdered cordial which tasted just like an inferior version of SodaStream, and as we looked up toward the heavens we were greeted with the most amazing view of the night sky.

With the knowledge we had gained at the Observatory outside of La Serena, we confidently identified both Scorpio and the Southern Cross (that’s 2 out of the 52 Southern Hemisphere constellations folks), and as the night progressed we were able to see the Milky Way.  With so much visible to the naked eye, you begin to understand why the Atacama, with just 30 cloudy nights a year, is home to so many observatories, including the imaginatively titled Very Large Telescope. 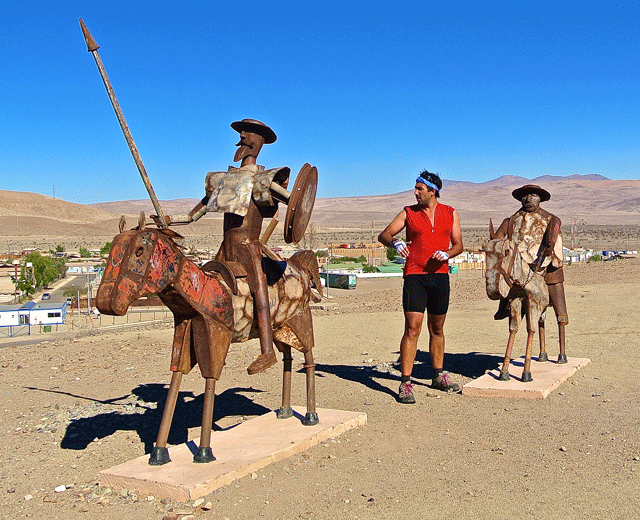 What’s that you say? People have way too much time to build tat in the desert? Yes, I agree

Travelling further north the environment became more barren and rocky, with a corresponding lack of vegetation.  This decline in plant life coincided with an increase of hi-vis jacket wearing miners (sadly Tony Abbott was nowhere to be seen) as we cycled past numerous copper mines.  We spent a night in Vallenar before continuing toward Copiapo, where in 2010, 33 Chilean miners were trapped underground for 69 days due to a mining accident. 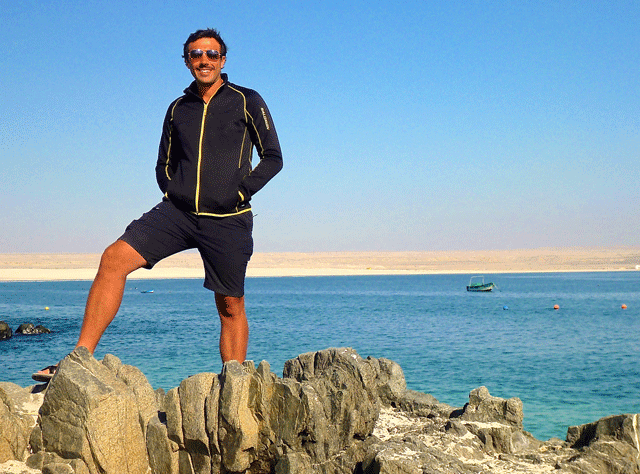 Who’s that handsome chap on a rock? It’s Chris at Bahia Inglesa

Sadly, Copiapo wasn’t on our agenda, so we bypassed the town and followed the road to the coast, and the town of Caldera.  Whilst our skanky cycle wear was washed, we spent a day at Bahia Inglesa (English Bay), before a day of coastal riding took us to Chanaral, a town whose best days were long since gone.

That night, as we looked at the route ahead, it looked like it was going to be one of the most difficult parts of the trip so far.  The road took us from sea level to 2300 metres, and as we began to climb the switchbacks of the Cuesta Portezuelo Blanco, the conditions began to take their toll. 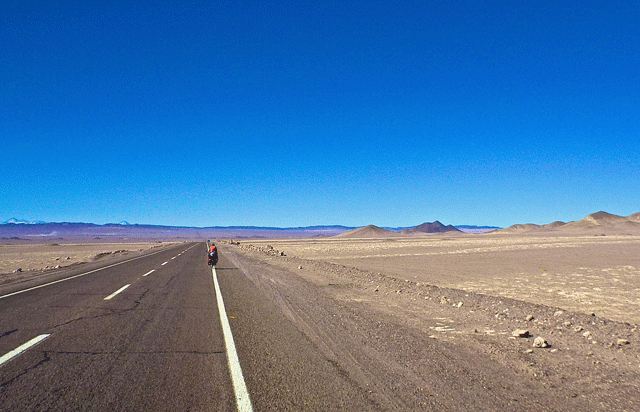 What’s this? Two pictures of Mel’s back in one blog? Unacceptable. But look, it’s like the moon with a road on it!

With the sun beating down as we rode through this lunar landscape, the exceptionally dry air meant I was seriously considering putting moisturiser up my nose.  At every rest stop we were decimating our supplies by guzzling down a litre and a half of water, so as we took refuge in the shadow of a parked truck for lunch, we were fortunate that another truck driver gave us 5 litres of water.

We camped that night and started out the next day with what we thought was enough water to make it the 30km to the next available water stop, however with the dehydration of the previous days exertions still hanging over us, and the air thinning, I was going out of my mind with thirst as we struggled up to 1800m.  Witness the following conversation:

Mel – “Well you can only drink in tiny sips”

Chris – “Fuck this shit.  If I want to drink, I’ll fucking drink”

Mel was suitably unimpressed, but a kindly couple were waiting at the top of the hill.  They questioned our sanity and offered us a lift, which to Mel’s disappointment I declined, and then, more out of pity than anything else, gave us a bag of apples and some walnuts.

With our throats now as dry as the desert we were riding through, we trudged on.  The petrol station finally came into view, yet a slow puncture caused me to have to push my bike the final kilometre.  By the time I arrived I was a broken man.  Slumped against a wall with a Pepsi in hand, I was barely coherent when Ludwin began talking to me.

He was the fourth driver to look at us like we were insane, and with a stretch of 165km with no water available to come, you’d think he was right.  He explained that it gets hotter, drier, and windier the higher we go, and we were welcome to throw our bikes in the back of his truck and he’d take us to Antofagasta.

Fearful of being judged by the armchair cyclists that follow this blog, I once again politely declined, but as he went off to grab some lunch, Mel put forward her most convincing arguments (we’re too slow, we’ll run out of water, and it’s dangerous).  I was slowly coming round to her way of thinking, but was holding out for something more.  Then came the kicker:

“If we take the truck, I’ll learn Spanish” 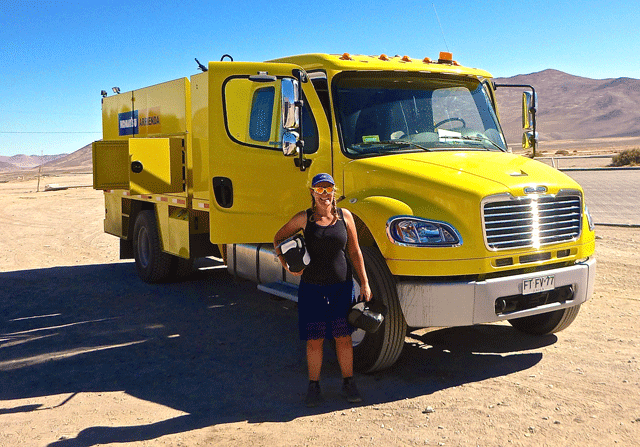 A grinning Mel about to board the Big Yellow Truck

Upon his return, we graciously accepted Ludwin’s offer, and having stashed the gear, we clambered aboard the Big Yellow Truck.  With the conversation exhausted, we perused his extensive CD collection – Rock Hits and 80’s Disco Megamix, so with Europe’s Final Countdown in our ears, we stared out at the vast expanse of nothingness from the comfort of the air-conditioned truck, convinced that we had made the right decision.

As we closed in on Antofagasta, looming large in the desert was Mano Del Desierto, something we had been looking forward to seeing since Santiago.  We pulled off the road (Soundtrack: Phil Collins – Against All Odds), and Ludwin managed to park his truck in the most inconspicuous place possible.

I would normally stick a photo of me and Mel up here, but Ludwin’s photography left a lot to be desired, as did his parking. L-R: Big Yellow Truck, Giant Hand Sculpture, Ludwin, Chris

Leaving the sculpture behind, Ludwin asked whether we wanted to go to Antofagasta or would we like to continue with him to his final destination – Calama.  The thought of having to go from the coast to over 2000m again meant the decision was a no-brainer, and 5 hours later we were dropped off in the dark in Calama.

It took a couple of days to acclimatise, but we were soon ready to make our way across to San Pedro De Atacama.  As the road steadily rose from 2200m to over 3400m, the decreasing levels of oxygen brought out our full emotional range.  Whereas it took all of Mel’s will power to stave off tears, I would descend into a fit of rage after minimal provocation.  After both my tyres went flat over the course of lunch, my immediate reaction was to throw the bike to the floor and starting kicking the shit out of it.  Sadly there are no photos of this. 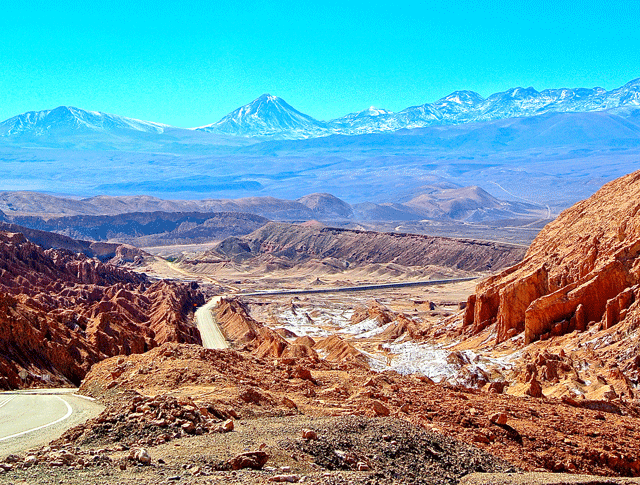 The road leading to San Pedro 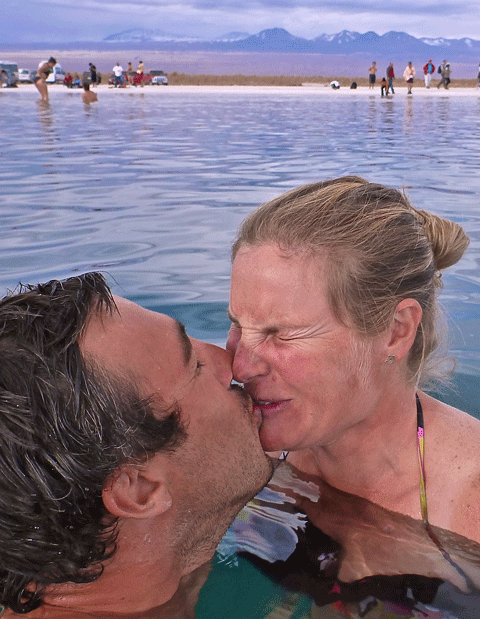 Love is…bobbing about in the freezing Laguna Cejar

We finally made it to San Pedro in spite of more technical problems (a spoke on my rear wheel had come loose, causing the wheel to be untrue yet again.  I wonder if it has anything to do with me booting it?) where we partook in some good old sightseeing.  Firstly, a trip to Laguna Cejar, a saline lake where for the princely sum of $5 you have the pleasure of floating in ice-cold water with your loved one for 20 minutes.

And today we visited the El Tatio geyser field.  In spite of my best attempts to miss the tour by sleeping through the alarm for the 4am start, and the bus having to be dug out after getting stuck in the snow on the way up, we finally made it to an otherworldly place of snow and steam best summed up by this photo. 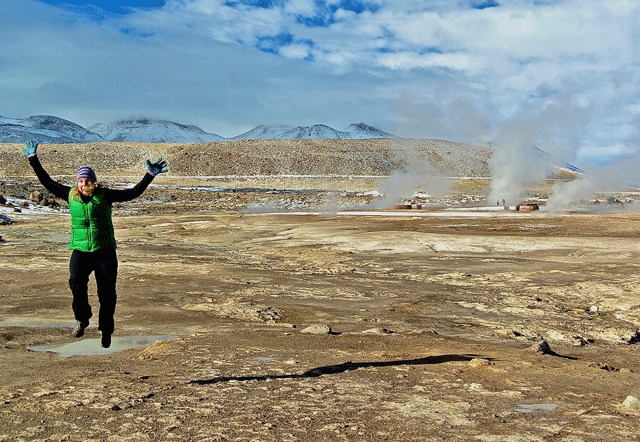 I have no idea why we have started taking jumping photos. Mel bouncing around at 4200m

So what now?  Well we’re going to head back to Calama on the bus (sod riding over that hill again) to get my bike repaired, before heading north to finally leave Chile.