The one where Chris finds a friend, but not the Equator 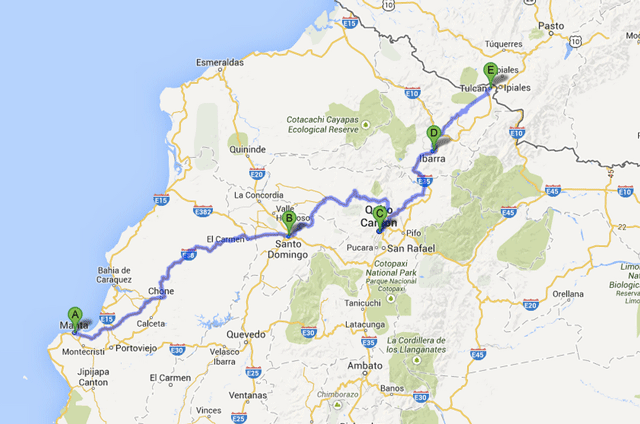 And this week, the route shall be here

With all the sweet treats and joy now removed from my life owing to my newfound diet, we took to examining the map of Ecuador only to discover that it isn’t actually possible to cycle into Colombia via the coast.  Our abject lack of planning had come back to haunt us, so with the coastal route no longer an option, we decided to take a bus to Quito.  Yet catching buses everywhere is far too easy, so after leaving Mel and her bike in the rarefied air of the Ecuadorian capital, I returned back to Manta to fulfil my masochistic and/or stupid idea of riding up and over the Andes back to Quito.

I had decided to swap my stupid spoke shearing wheels with Mel’s to hopefully prevent the endless mechanical problems I had been suffering, and headed out of Manta at 6am for my four days of solitary cycling.  Yet for the first 4 hours it seemed as if the bike was going to fight me every inch of the way.  Exhausted, I stopped for a bite to eat only to realise that I had spent the last 70km riding with the front brake on, so after some minor adjustments I had my wheel rolling freely again, and I headed away from the coast toward the hills of the interior.

As the day wore on, I noticed a touring bike propped up further along the road, which upon closer inspection appeared to have a man asleep next to it.  I introduced myself to the comatose cyclist, and a rather groggy Nic proceeded to tell me his story.

Nic had begun his trip with a friend in Buenos Aires, but the relationship had turned sour when his companion met a girl, which led to an acrimonious split in Lima, Peru.  He was now riding alone with the intention of finishing his trip in Quito, so we decided to ride together and pedalled off into the afternoon sun. 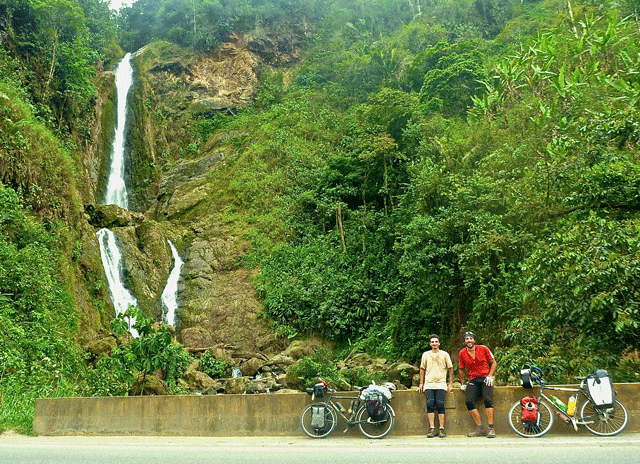 Whether it was the 70km of riding with my brakes on, or the massive dehydration I was suffering, when we hit yet another steep gradient, I was spent. Desperate to camp, we began scouting for spots but our efforts were foiled by the endless barbed wire that abutted the road.  Eventually I found what appeared to be an abandoned house, so after a little encouragement, Nic joined me in a spot breaking and entering, and we began to set up our homes for the evening.  We were not alone for long.

Minutes after committing our heinous crime, what can best be described as a mob, led by a man carrying an antiquated shotgun, turned up.  Being fluent in Spanish, I immediately dispatched Nic to calm the situation, and after a number of handshakes, smiles, and quite a lot of bad Spanish on my part, the gang dispersed, allowing us to continue assembling our tents.  Still, we weren’t to be left alone as 15 minutes later we were interrupted again, this time by two members of the local constabulary.  They informed us that the locals in these parts have a “shoot first, ask questions later” policy, which seemed odd as the locals we had just encountered had opted not to brutally murder us.  After the police eventually departed, we managed a good nights sleep, and woke in the morning to find neither of us riddled with bullets.

We continued onwards with our ride, over Ecuador’s exceptionally steep roads, but as the humidity dissipated, the scenery became glorious and we followed the meandering river Tanti through the valley toward Santo Domingo.  With our goal almost in sight, we had an arduous 1500 metre climb to the summit.  Averaging an impressive 5 km/h, it took us 6 hours to grind our way to the top, before we spied the volcanoes that surround Quito and following a rapid descent into the Guayllabamba valley, I was reunited with Mel. 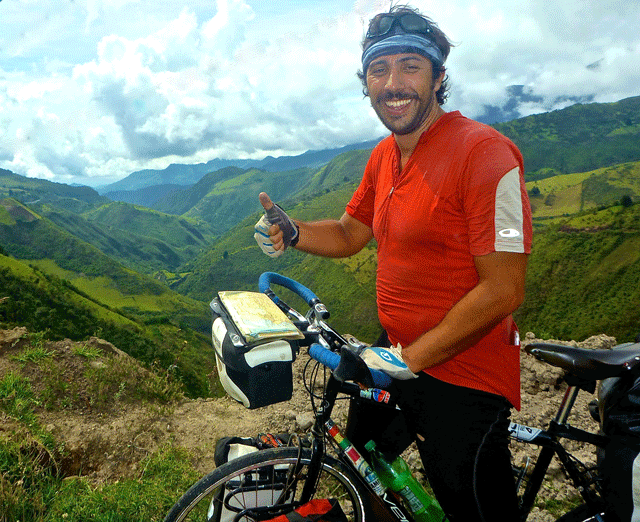 The top! Well sort of, the actual top had a crap view 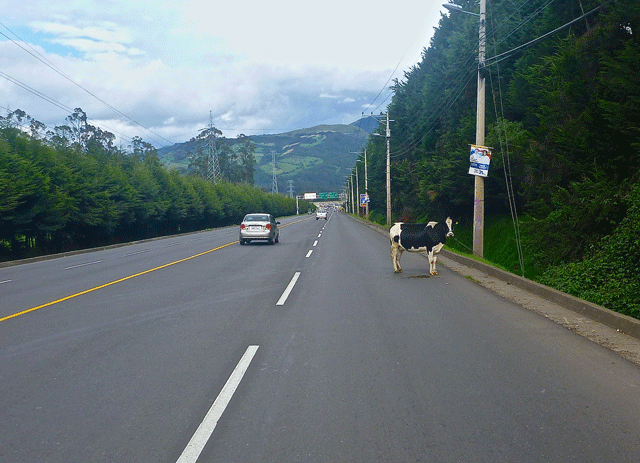 On the way down to Quito someone had tied up their cow. In the road

Quito is a beautiful city, and we spent a couple of days exploring the marvellous UNESCO listed old town, but once again, it was time to temporarily part ways with Mel. 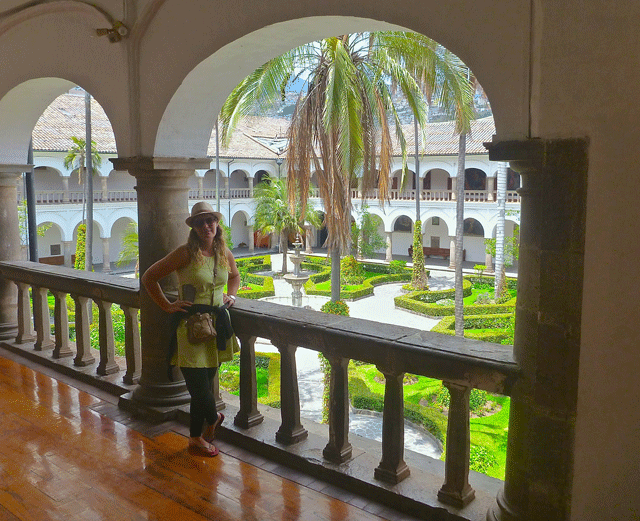 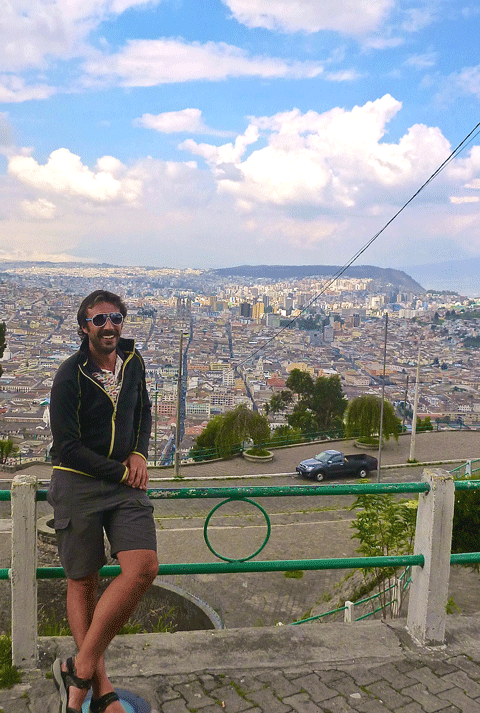 And me grinning at the top of El Panecillo, Quito

With our trip having begun in the world’s most southerly city, Ushuaia, and with the imaginary line that marks the middle of the world sitting just 25km north of Quito, I wanted that all-important photo of me grinning inanely in front of a giant orange column. 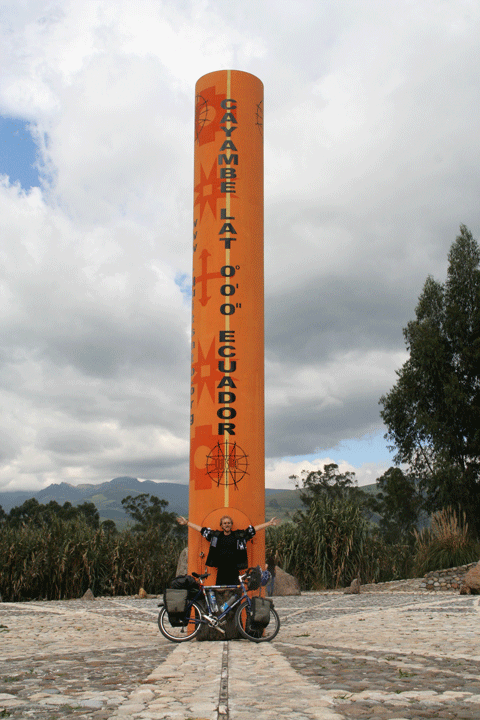 This picture has been shamelessly stolen from someone else’s blog. This was my intention

Sadly, as we were above the 2000 metres (Mel finds it exceptionally difficult to cycle at this altitude), I would again be cycling alone, so with Mel 130km away in the town of Ibarra, I set out to find the monument.  It was another early start to avoid the morning rush, and the road was unnecessarily steep as ever, yet after 40km the mysterious pole was nowhere to be seen.  I cycled further north, and still, nothing.  Even the cyclists heading south told me there was no indication of an impending equator, and it wasn’t until I arrived in Ibarra and checked the web that I realised that the monument itself wasn’t even on that road, and I had cycled for 12 hours for nothing. 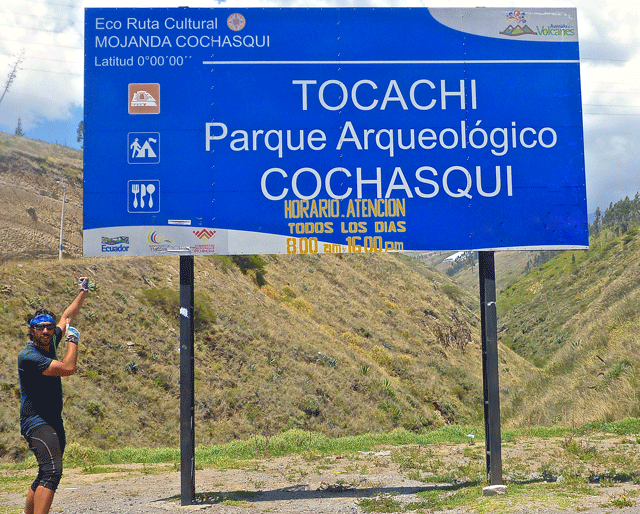 And this is as close as I got. Note the latitude in the top left hand corner

So having now crossed into the northern hemisphere, we were a mere 100km away from the Colombian border.  We had learnt our lesson in Manta, so checked a route planner which revealed even more hills that I had neither the time nor the inclination to ride over, so we made an executive decision to bus to the border town of Tulcan, and cycle across the frontier into the sixth country of our trip, Colombia. 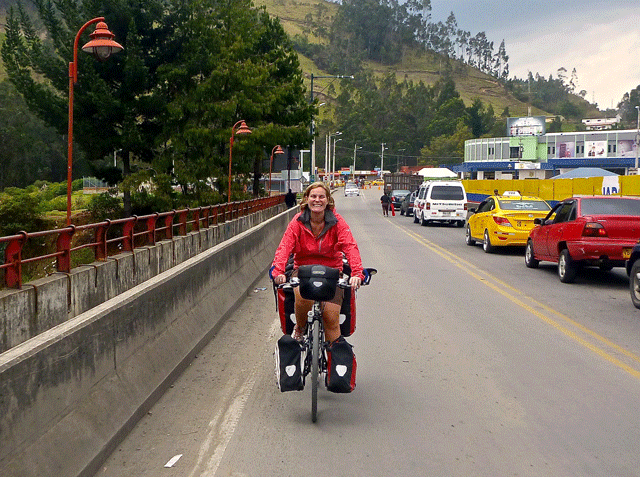 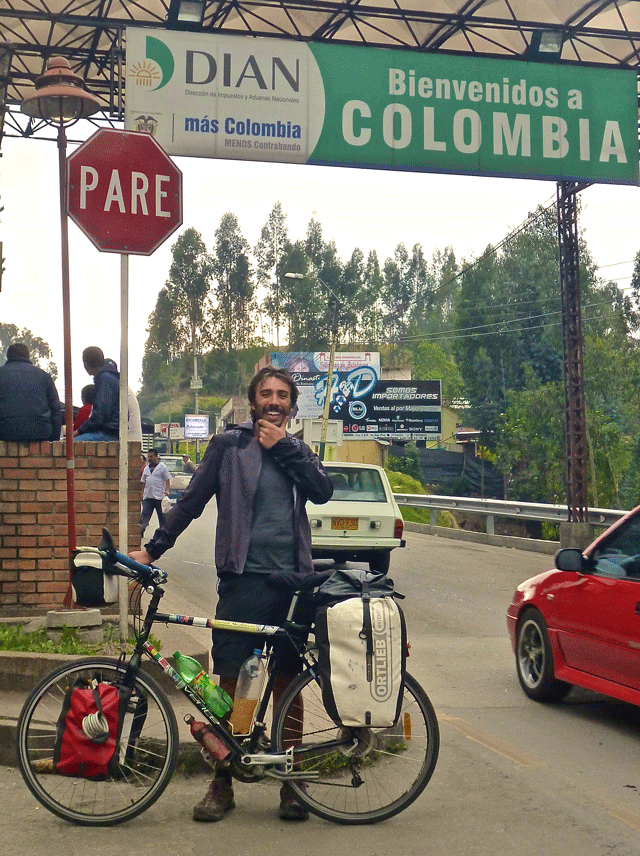 And then there was Colombia

Ecuador had been an amazing country to cycle, full of generous, smiling people, but now we find ourselves in Colombia, with just 1500km left to cycle before we finally depart South America.

Next stop the Caribbean.