The one month in Colombia

So this was it.  Colombia – land of coffee, cocaine, and Carlos Valderrama.

Our last South American destination, and with just 1500km of cycling left on the continent, we had given ourselves a month to ride across the country.  With Mel eager to ride again after missing out in Ecuador, we chose to avoid both the altitude and monumental climbs between the southern towns of Ipiales and Pasto, and opted for the bus instead. 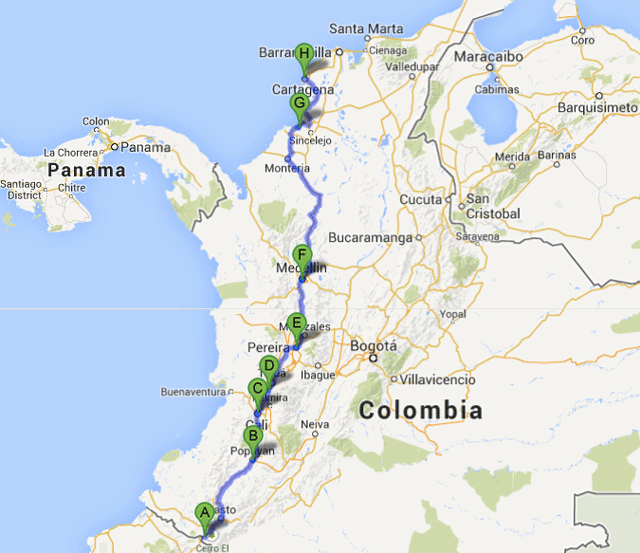 Colombia. There were busses taken in this bit!

If I were to recommend a town to visit in Colombia, Pasto wouldn’t be it, so after a bout of food poisoning, an earthquake and with our bikes and teeth repaired (we have had 5 fillings between us in South America, all of which have fallen out), we rode up and out of the town along with numerous road cyclists, and began a sweeping 2000 metre descent into the valley below, where we were met with beaming smiles from the locals and a wall of humidity that left us sodden. 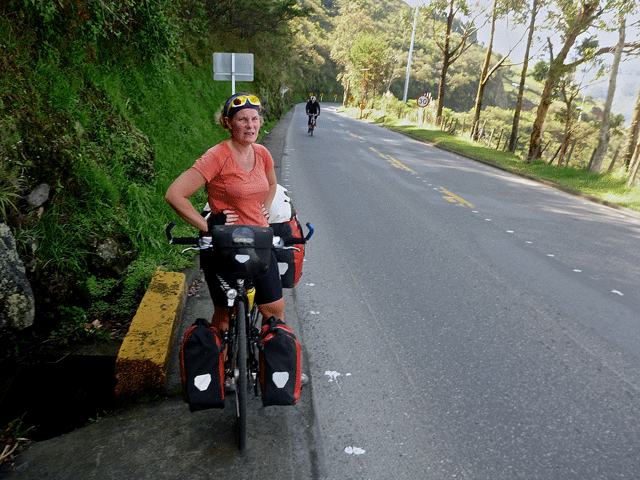 It was a tough gig riding out of Pasto… 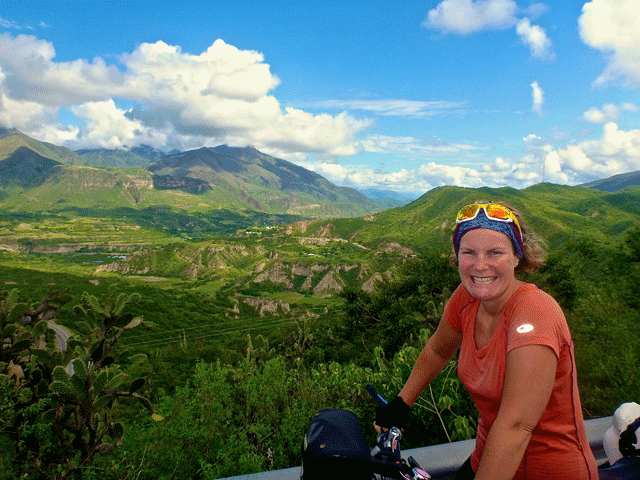 But it was a smiles at the bottom of the hill

Southern Colombia has a large military presence owing to continuing guerrilla activity, so as we pedalled past billboards showing recently eliminated FARC leaders, we were slightly unnerved.  Yet the soldiers who lined the highway didn’t seem particularly interested in a couple of sweaty cyclists, and appeared to spend most of their time either playing with their mobile phones or making eyes at Mel.

Undeterred by teenagers with assault rifles, we continued on to the town of Popayan, which had been given the envious title of Colombia’s culinary capital.  People had raved about Colombian cuisine, and having spent the last 11 months eating the dire local fare (there are 387 million people living in South America, and not one of them has come up with something other than chicken and rice) we were keen to sample something different.  Sadly, all Popayan had to offer was an uninspiring Mexican restaurant which left us mildly disappointed. 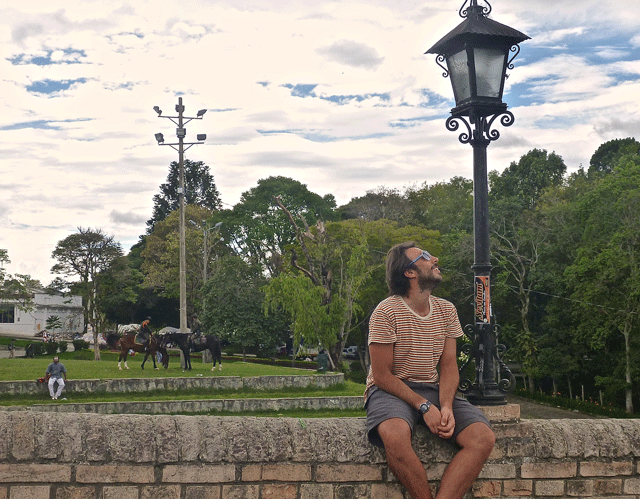 A man on a wall in Popayan

We spent an uneventful couple of days riding through the endless cane fields of the Cauca Valley, stopping only to sample Colombia’s weird and wonderful local fruits – moras (blackberries on steroids), guanabanas (soursop or custard apples), and lulos (fuck knows) – all made a decent change from the limitless supply of bananas offered up in Ecuador, and we were soon in Colombia’s salsa capital, Cali. 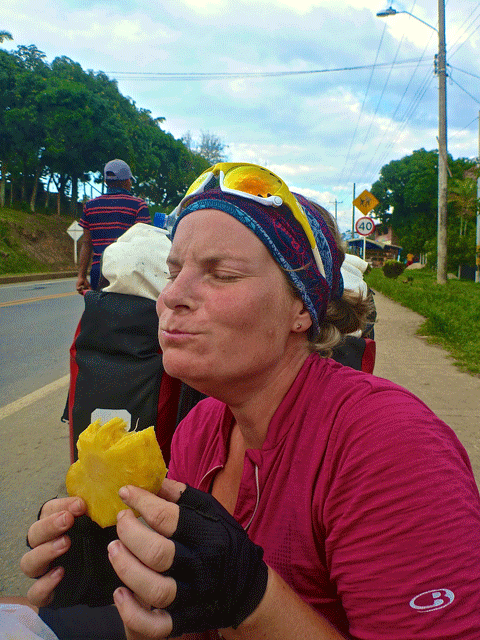 You can’t beat a good bit of pineapple

In my youth, I would often find myself channelling the spirit of Ricky Martin, throwing myself about a dance floor with gay abandon, but after a day on the bike the last thing I feel like doing is dancing.  Yet somehow, just hours after arriving in Cali, we were roped into a salsa class, and proceeded to spend the next hour falling over our feet, sweating profusely, and committing various crimes against choreography.

With the Latin spirit now within us, we headed north for coffee country, and after a quick detour to a microbrewery in the town of Buga, we finally arrived in Pereira with the intention of visiting one of the plantations to sample a cup of coffee that isn’t made with Nescafe. 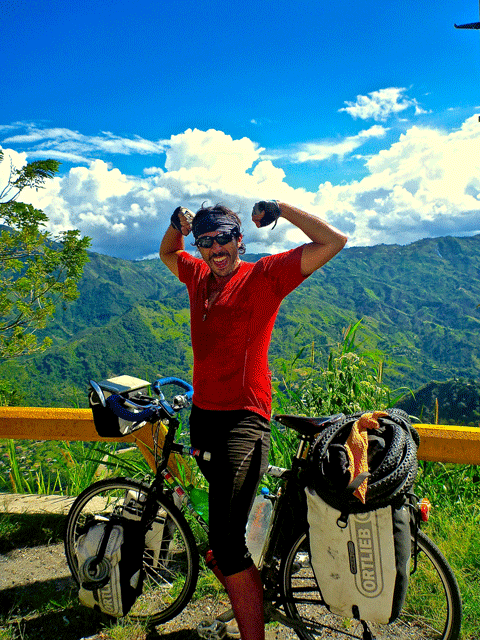 Checking into our hostel we spotted the business card of a physiotherapist, and with Mel complaining of neck pain, we took the opportunity to get it looked at.  Enter Roy, a 6’8” Dutchman who had recently moved to Colombia from Liverpool.  He was more than happy to try and alleviate Mel’s suffering, but it took 3 days of intensive work to realign her neck and shoulders, which we can only attribute to her new handlebars (fitted in Peru after her bike was unceremoniously ridden into a tree) that have significantly altered her riding position.

Attempts were made to find Mel some new bars whilst in Pereira, but our search proved utterly fruitless, and with another load of pointless hills to climb (potentially exacerbating her neck problems), we hopped on another bus to Colombia’s second largest city, Medellin.

People had warned us about the dangers of Medellin (daylight robbery is a common occurrence), but we found it pleasant enough, taking the cable car to Arvi Park and visiting the excellent Fernando Botero exhibition, whose work is defined by his so-called “fat” figures. 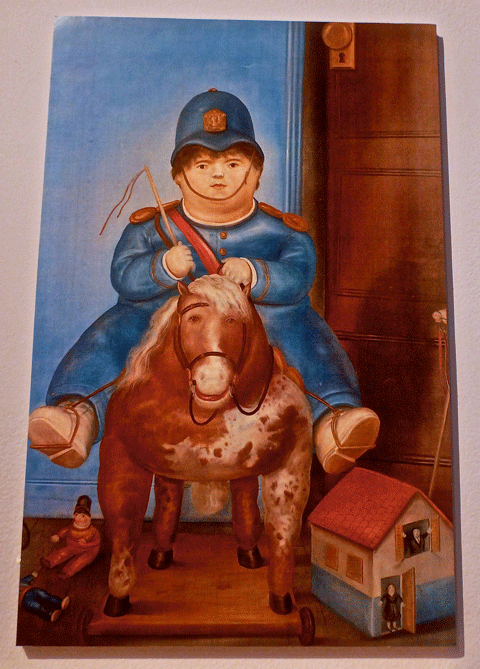 One of Botero’s works 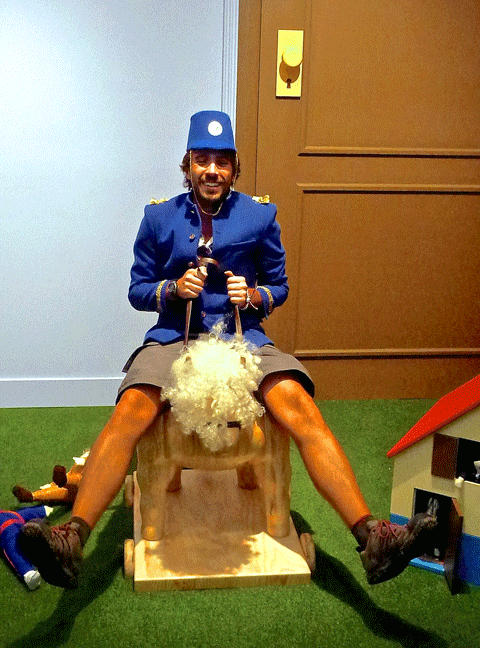 With the clock now ticking, we entered the final straight of our South American adventure.  We had just 700km to cover before we could take a dip in warm Caribbean waters, and as the road took us up into the heart of Colombian dairy country, we caught up with another cyclist – Jerome from Belgium.

Having never ridden with another cyclist as a couple, it took a few days to adjust to Jerome’s plodding pace, yet we soon found a way to accommodate all of our styles (we would ride off into the distance for an hour, stop for a Coke, and Jerome would turn up eventually).  We cycled with Jerome all the way to the coastal town of Coveñas, before striking out alone for Cartagena. 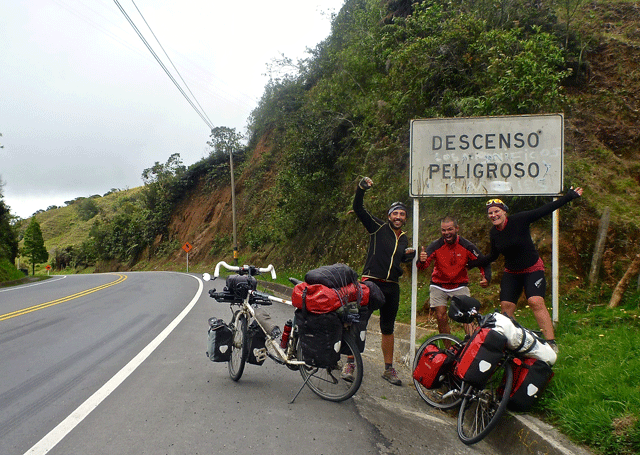 Riding through the small town of Turbaco, we finally crested the last hill, and with Cartagena in the distance, Mel shed a tear.   I, on the other hand, continued my one-man war with South American traffic by raging at the local busses.

So as we rolled down into Cartagena, fully 356 days after leaving chilly Ushuaia, we had made the Caribbean at last.  Having crossed the deserts, mountains, and jungles of South America, our celebrations were raucous.  We opted not for a bag of Colombia’s finest (oddly enough, Colombian drug dealers do not see two scruffy cyclists as their target market), but pizza and Peroni instead. 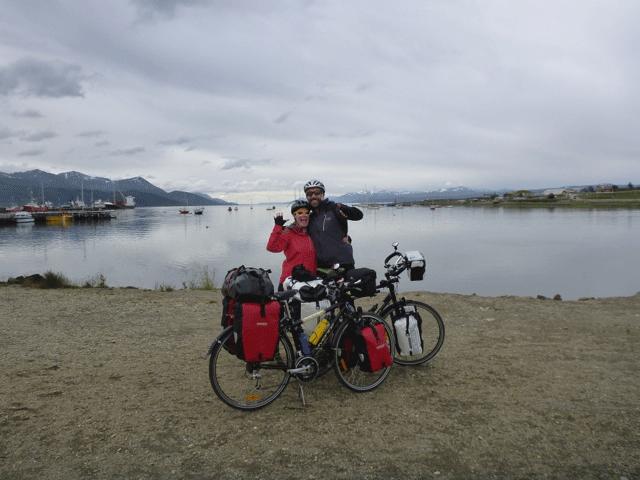 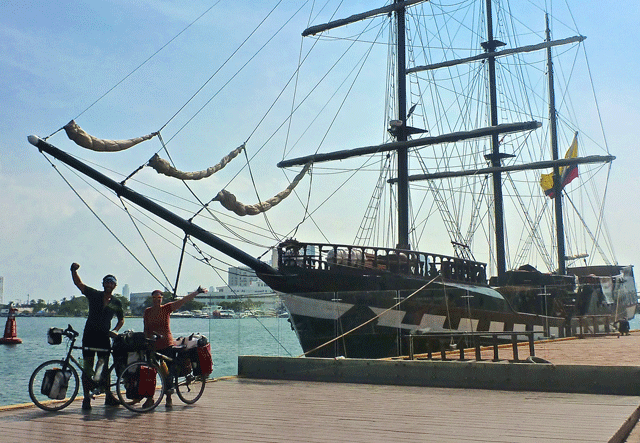 And with that, we stepped onto our catamaran for a five-day sailing to Panama, and from there, a flight to Florida for a Christmas reunion with my family.

So that’s it.  South America done.  We’re taking a well-deserved break from the bikes, and will be back pedalling in the New Year.  There will be some extra bits and pieces going up on the blog during the holidays, so stay tuned.

featured
← Previous The one where Chris finds a friend, but not the Equator
Next → Our year in numbers with a few awards thrown in