The one about our holiday from the holiday

As this is nominally a blog about our attempts to cycle the Americas, and since the last edition we’ve done the square root of fuck all cycling, I shall keep this entry brief, and hopefully improve on the photographic content. 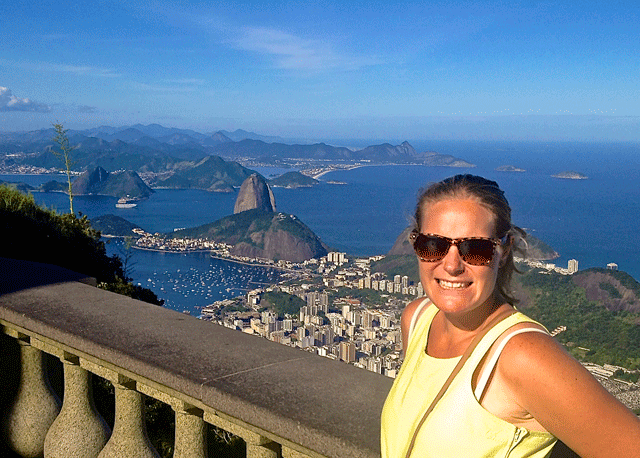 A taste of things to come – Mel, Rio, Sugar Loaf.  Better than all of the last blog’s photos already

With a week to kill before we headed to Rio, we had the pressing matter of getting Chris’s busted bike repaired.  Fortunately, whilst pushing our broken steeds through Santiago, we were handed a business card.  Jeff introduced himself as a keen cyclist, and after a flurry of emails, he pointed us in the direction of a bicycle mechanic who gladly accepted the task of rebuilding my rear wheel.

As the bikes were now in for repair, and with the hostel being full of insufferable gap year types, we made a break for the coast and headed to Valparaiso.  Stepping off the bus to be met by a town whose best days were clearly behind it, we began to wonder what all the fuss was about.  Our mood was not improved when as we tried to sleep that night, a violinist struck up a rendition of Carly Rae Jepsen’s hit, Call Me Maybe, right outside our hostel window.  Yet the next morning, as we took a funicular up into the hills, we began to see why the city has been made into a UNESCO world heritage site.  We meandered through Valparaiso’s narrow streets, admiring both the colourful houses and incredible murals daubed on pretty much every wall, and with Mel having received some more work, I wandered about, Instagramming the shit out of the place (yeah, I’m one of those people). 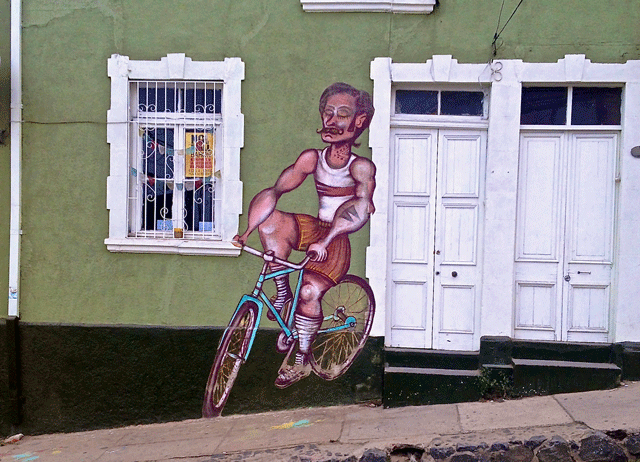 Valparaiso street art.  I now model myself upon this rather fetching gentleman

With Mel’s work completed, we bussed back to Santiago to catch up with fellow northbound cyclists, Ronnie and Linda, and Mirenchu, who had kindly offered to store our panniers whilst we were in Rio.  With our gear stashed, we headed off for the holiday from our holiday. 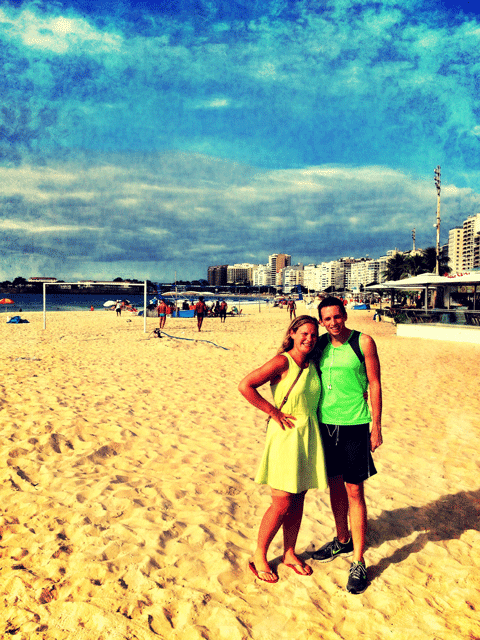 Mel and Stu on Copacabana

We would be staying with Stu, who Mel had met during her hedonistic travels around South America a number of years ago.  Stu now lives with his husband Rafa in Rio, and they were more than accommodating hosts, especially given the litany of disasters that occur around Mel – wine spilt all over their sofa, a 5-hour power cut, an overflowing toilet, and a mild anaphylactic reaction.

In spite of Mel’s protestations, we couldn’t just sun ourselves on Rio’s fabulous beaches, so we headed off to see a small part of this huge country by taking a 12-hour bus ride to the southern city of Curitiba.  As we wandered from one closed tourist attraction to another, it wasn’t until we visited the only thing open, the tourist information office, that it was explained to us that on Monday’s all the attractions were closed.  After a fruitless attempt at sightseeing, a train was booked to the coast for the next day. 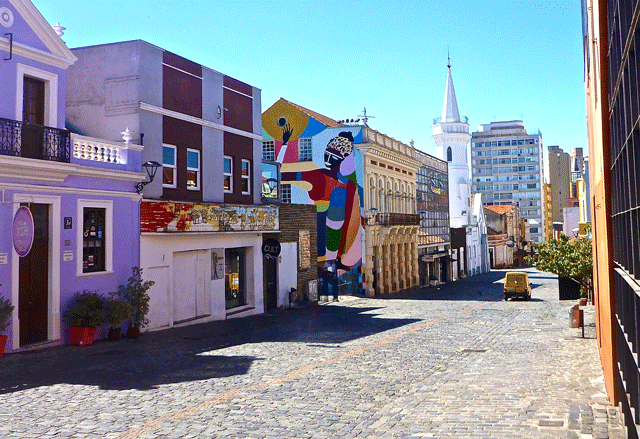 Curitiba – Deserted and closed on Mondays

Billed as one of the “most exciting and beautiful travel experiences in Brazil”, the train trundled along at an unexciting 15kmh, and with the guide speaking unintelligible Portuguese, we spent the 3-hour journey watching our fellow passengers take photos of trees, whilst wondering why we didn’t just catch the bus instead. 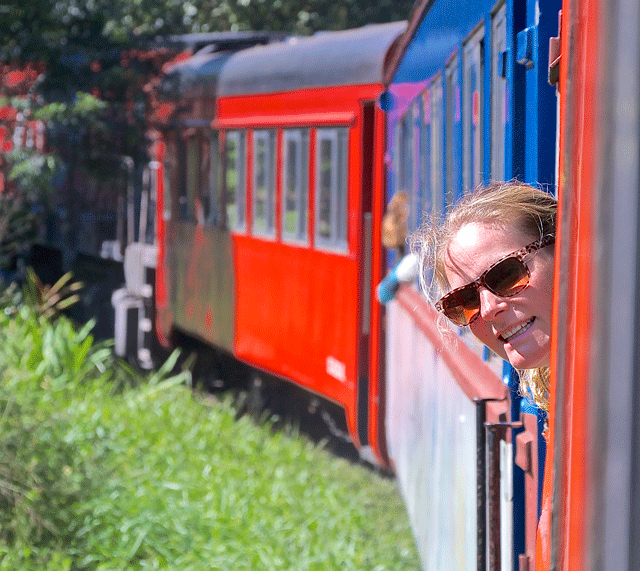 A bus and a boat later, we set foot on Ilha Do Mel (Honey Island), and it soon became clear that as it was off-season, we would have most of the island’s powdery white sand to ourselves.  After a couple of days trying to resolve Mel’s tan line problems (if you follow us on Twitter of Facebook you will have seen the photo), we made a mad dash for the overnight bus to Foz Do Iguacu. 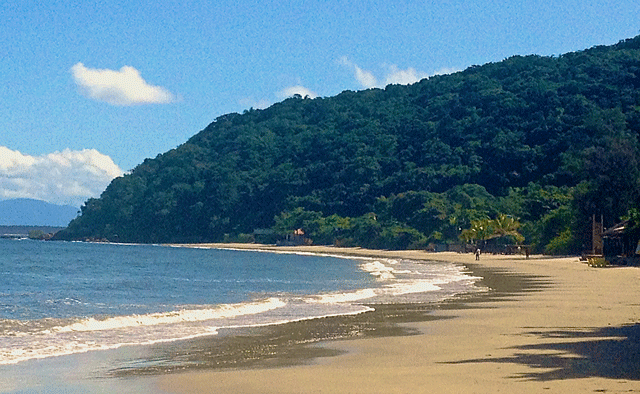 We turned up at the hostel the next day exhausted, only to be told that the Brazil side of the falls was a bit shit, and that the bus for the vastly superior Argentinian side of the falls was leaving in 10 minutes. We quickly got ourselves together and once at the park we were whisked onto a boat that battled the mighty currents to take us to within metres of some of the lesser falls, utterly drenching us in the process. Walking through the park’s lush forest, utterly astounded by what I was seeing, I was told that the best was still to come. 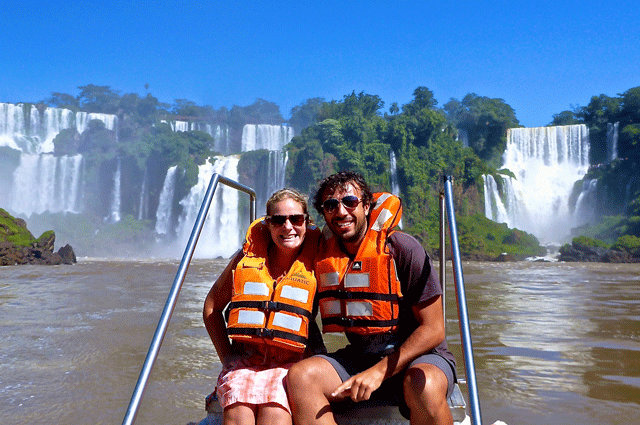 Minutes after this photo was taken, the boat aimed for those falls and drenched the lot of us

After jostling our way through the crowds, we eventually arrived at the largest of the falls – Garganta Del Diablo (The Devil’s Throat), which left me utterly awestruck.  I was astounded by the sheer volume of water cascading down in front of me, and it has been my highlight of the trip so far. 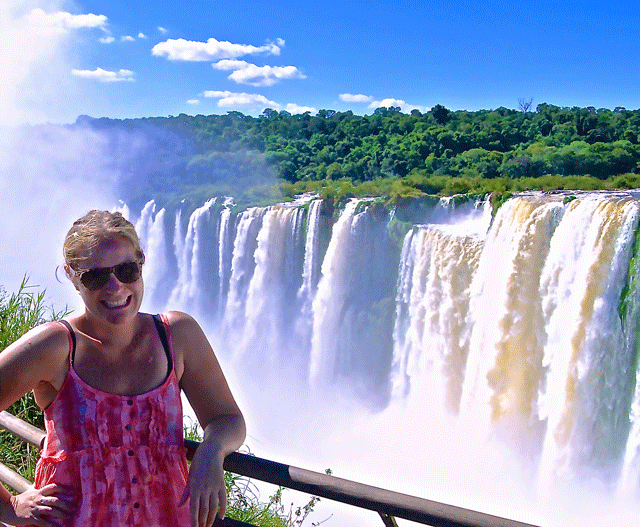 Obligatory photos taken, I spent the rest of the day bothering the park’s hundreds of butterflies, which apparently you’re not allowed to touch, so I collected them like an 8-year old collects football stickers. 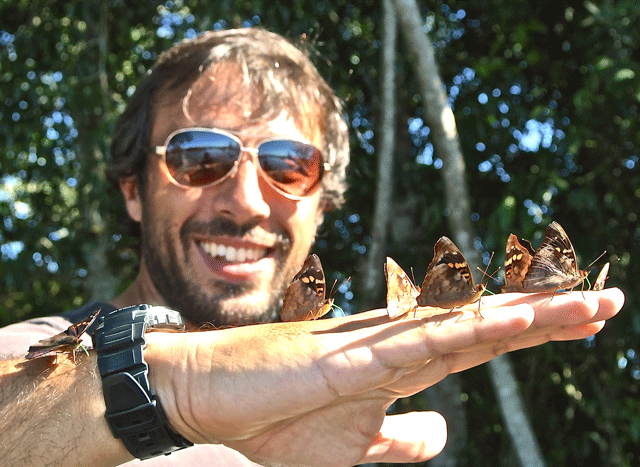 Don’t touch the butterflies? Yeah, whatever. It was all going so well until a 5-year old girl ruined all my fun and scared them off…. Bitch

With a day to kill before our hellish 23-hour bus ride back to Rio, we took time to visit Foz Do Iguacu’s other sights – the bird park (an interesting experience when you realise that Mel is petrified of birds), and the Itaipu Dam, a modern wonder of the world (look it up on Wikipedia if you don’t believe me).  Whilst I can appreciate it as a tremendous feat of engineering, you have to be a real fan of concrete to appreciate its aesthetic qualities.

A very very wide picture of a whole load of concrete 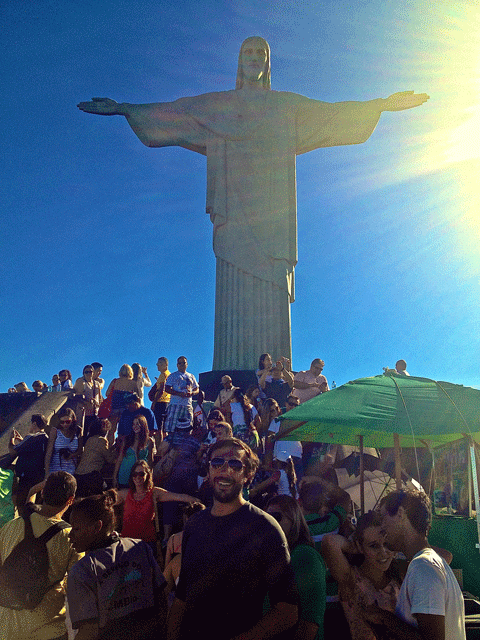 Christ, Chris, and half of Rio

Like a pair of zombies we arrived back in Rio, with the big-ticket attractions still to see.  With an overpriced Copacabana hostel booked, we headed to Christ the Redeemer, where we found half of Brazil taking in the views, and then Sugar Loaf, which was a far more relaxing experience.  Rio was jaw droppingly beautiful, and with a population to match, we have vowed to return, hopefully with more time and money as Brazil is not only vast, but terrifyingly expensive!.

The holiday now over, we’re back in Santiago and with the bikes in full working order again, it is time to hit the road.

On Sunday, we ride.