The one with incredibly dull photos

“Meeellllllll.  Have you seen my fleece?”

“Well it was, but it’s not there anymore.”

Someone had stolen my jumper.

I was fuming.  Not only because it had, amongst other things, our Garmin GPS in one of the pockets, but because I had spent an hour fastidiously sewing up its numerous holes with bright green cotton whilst I was sick in Junin.  It wasn’t until Mel reminded me that we had travel insurance that I began to calm down.

With my rage under control, I strolled into Pucon police station and using a combination of mime and rudimentary Spanish, I conveyed my problem to the rotund duty officer.  After observing my Oscar winning performance, he agreed to write me a police report, but it soon became clear that Officer Millaqueo hadn’t completed his basic computer training, as using just his index finger, it took him over an hour to produce a 250 word report.

With my documents in order, I whizzed these off to my insurance company, who swiftly rejected my claim on the basis that I had left my jacket unattended (for all of two minutes) and would therefore not be paying out.  Dicks. 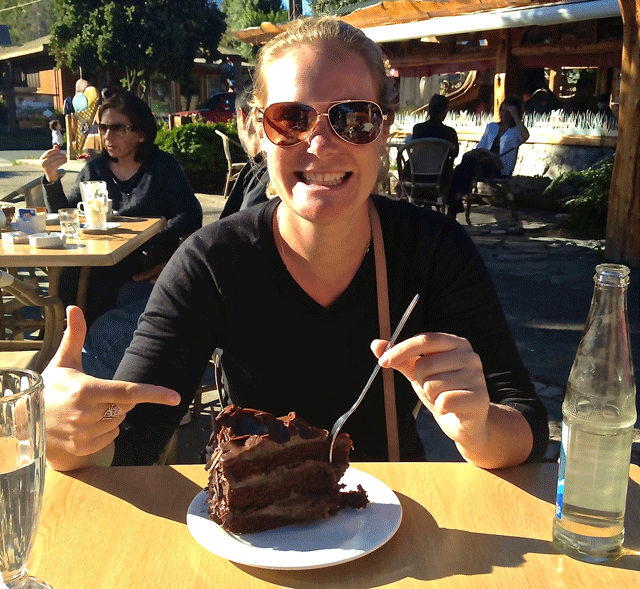 Seriously, this is about as exciting as it gets. Mel with a cake

As we sat in a café the next day, mourning the loss of over $500 worth of gear; we were approached by Andy.  Andy, originally from Hull, decided that there must be more to life than council housing and fish and chips, so left for sunnier climes and has spent most of his life running a dive school in Cairns.  He had been cycling on the same model of bike (Vivente World Radonneur) as ours in northern Chile, when a reversing truck brought his trip to a premature end by snapping his frame in two.

Having listened to our tales of woe, he informed us that he had the exact same model of GPS sitting unused in his rental car, and we were more than welcome to borrow it for as long as it was needed.  Not only did he lend us his sat nav, but after bumping into him again a few days later in the town of Villarrica, he gave us all of his food.  Andy – we salute you. 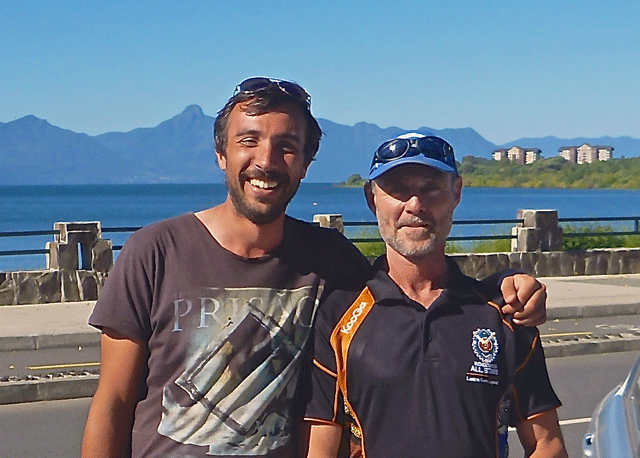 An inanely smiling Chris hugs an awkward looking Andy. Want to be in our blog? Just lend us stuff or give us food!

After the powerful antibiotics began to work their magic, causing Mel’s latest bout of diarrhoea to subside, it was time to get back on the road.  A number of less sickly tourers had ridden cross-country to the coast and headed north from there, but these roads were both steep and made of gravel, which we had no desire to attempt.  With the first signs of autumn in the air, and a burning desire to get to Santiago as quickly as possible, we made the decision to take the most direct route – Ruta 5, Chile’s main highway. 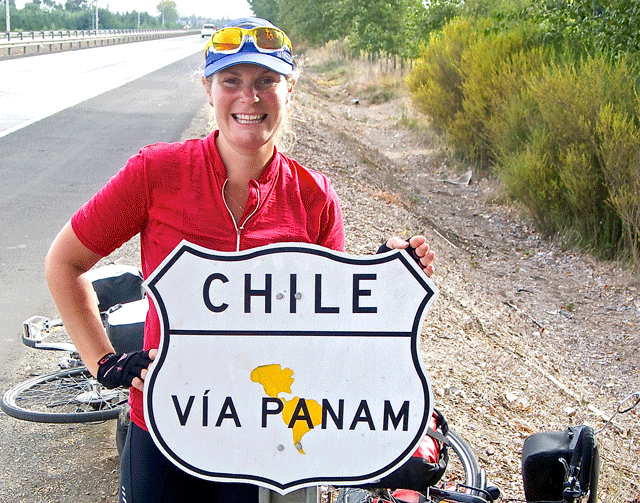 Ruta 5 is part of the Panamerican Highway, and yes, this is one of the more interesting pictures

As we rolled onto the busy highway, the borrowed sat nav started screaming at us to make a U-Turn at the next available opportunity, and we began to wonder just quite what we had gotten ourselves in to.  With the roaring juggernauts separated from your pudgy protagonists by a thin slither of white paint, we were terrified.  However it soon became clear that Chileans take a rather laissez-faire attitude to who can be on their major highways. 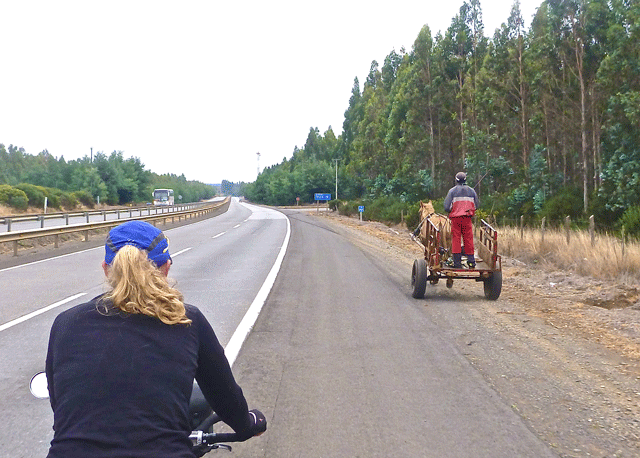 Having cycled around a horse and cart on our first day, we were subsequently joined by runners, people walking to who knows where, and lunatic Chilean cyclists, who seem to believe it to be safer to ride against the flow of traffic along the narrow lane that runs along the central reservation.  We even saw a chap taking his horses over a pedestrian overpass. 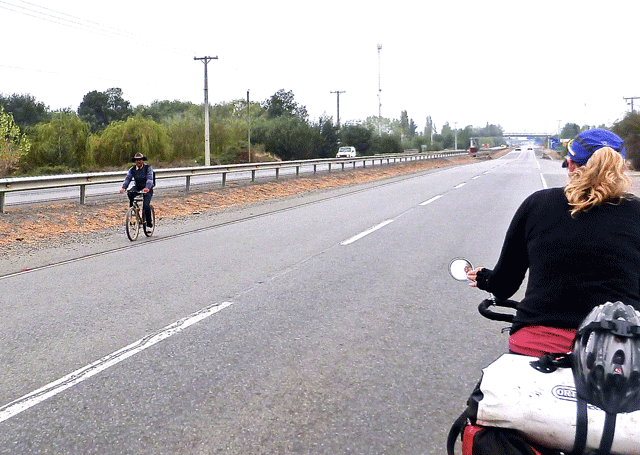 Sights of the highway #2 – A Chilean cyclist takes his life in his own hands. Don’t worry, there are duller ones to come

Realising that the motorists weren’t the slightest bit bothered by our presence, we began to quite enjoy the road.  We would spend our days with the wide shoulder all to ourselves, waving to the stern looking Chileans waiting for buses, all the while pondering questions such as how much money is there to be made in selling cheese alongside a motorway, and why are there so many chickens on the side of this road? 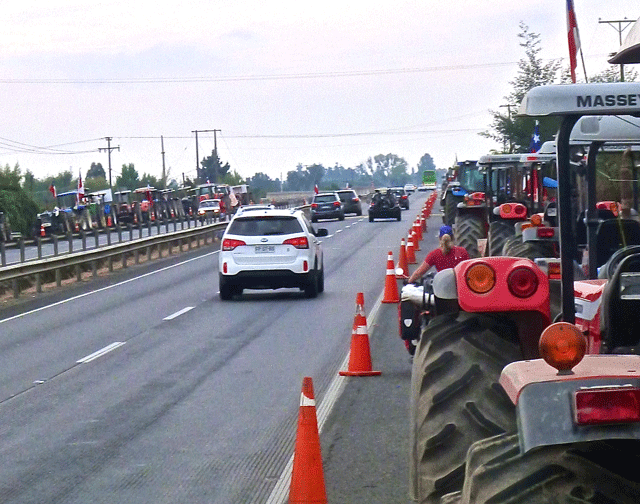 Whereas the gravel roads of the south felt like a monumental struggle on our narrow (700x35C) tyres, it felt like this road was made for us, and we were breaking milestones daily.  We passed the 3000th kilometre of our trip, completed our first 100km day, and set a new daily distance record of a whopping 117km!  Sure, this wasn’t pure cycle touring per se, as we would pedal into a town every night and find a cheapish hotel (which also acted as a miracle cure for Mel.  I think she may actually be allergic to camping), yet we were rapidly closing in on Santiago, a city that seemed utterly distant only a month ago.  Sadly, things always find a way of going wrong for us. 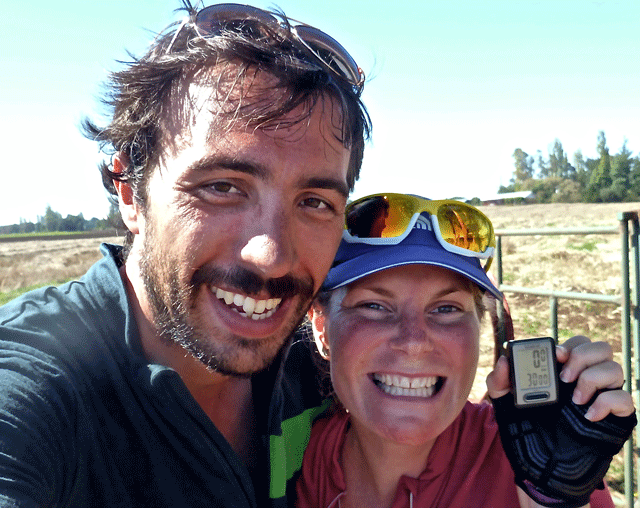 I was fixing a puncture on my rear wheel (Schwalbe puncture resistance my arse) when I noticed that my rim had cracked in four different places.  Having emailed Vivente (who promptly responded to my plight), I loosened off the spokes at the cracks, and prayed that it would hold for the next 500km.  We made our way north through Chile’s agricultural heartlands, and as the wheat fields became vineyards, and the vines gave way to orchards, we could almost smell Santiago.  We had ridden into the town of Rancagua, just 86km south of the capital, when I hit a pothole hard.  Thinking nothing of it, I woke the next morning to find a gaping hole in the rim.

I covered the hole with electrical tape (this is about the extent of my mechanical knowledge), but it soon became clear that my back wheel was hideously deformed.  It wouldn’t run true, and was hitting the brake blocks with every rotation.  We loosened off the brakes, but still, the wheel kept getting stuck, so we disconnected them completely, all to no avail.

I pleaded with Mel that with I could still ride with just my worn front brake, but with the busiest section of the road to come, and then the daunting task of riding through Chile’s largest city, she rightly pulled the pin.  We were crestfallen.  We had covered around 700km in 8 days, and in our minds, we were about to be welcomed to Santiago by applauding locals with garlands of flowers.  With tails between our legs, we stowed our bikes and boarded the bus, staring longingly at the tarmac from the window. 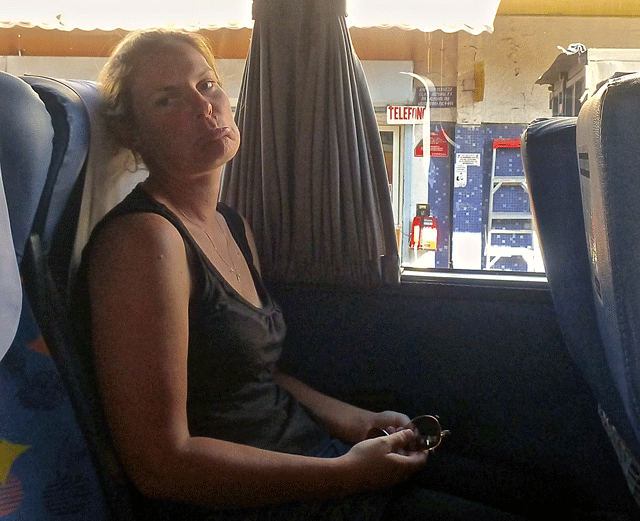 If you’re unsure of what the inside of a Chilean bus looks like, here’s Mel sitting in one on the way to Santiago.  Interest for the reader – 1/10

First impressions of Santiago were that it smelt faintly of urine, and as I pushed my broken bike along the afterthought that are Santiago’s bicycle lanes, all the while being shoved by the spatially unaware locals, it wasn’t improving.  In the sweltering heat, it took over an hour to walk to our hostel in Bellavista, whereupon our mood instantly improved.  The city was full of restaurants serving food that we have been craving, so we indulged ourselves with tacos and falafels, all the while smoking like chimneys and pouring alcohol down our throats like there was no tomorrow.

We had made it.  The medium-term goal that we had set ourselves all those months ago had become a reality.  Sure, there are going to be tougher times ahead, but I think that we have both been surprised to have made it this far.  After all this effort, we needed a break.

* Congratulations to Daniel Gerber who had the closest guess for our arrival time in Santiago (even if it was by bus, rather than bicycle).  Send us an email via the contact page with your address, and we’ll get a prize out to you.