The one where Chris loses his shit and falls off his bike.

On our first day cycling out of Ushuaia, we met a French cyclist with 10,000km under his belt.  He offered us the following sage advice – “If there is too much wind, then just don’t go”.

“Pah, what would he know?” we said to ourselves as we flew out of El Calafate, ably assisted by a tailwind.  However, as befits our journey so far, the road inevitably turned sharply to the left, and the previously helpful wind became a crosswind so strong, that it made it nigh on impossible to stay on the road.  After struggling with the wind all day, the next morning, Mel, who I thought was making good headway at 4kmh, had pretty much had enough. 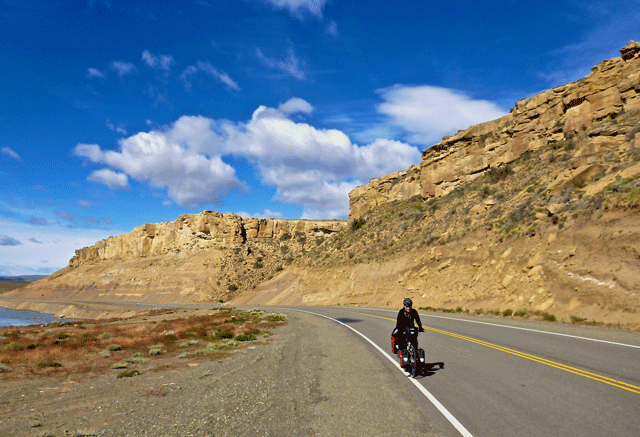 After arriving at Estancia La Leona, a former hideout of the infamous bank robber Butch Cassidy, we exchanged some rather harsh words over some overpriced coffee about Melanie’s reluctance to continue.   A few hours of steely silence passed before a bus arrived with room for two tired cyclists.  Melanie danced a merry jig.  I did not.

Having finally made it to El Chalten, the weather forecast predicted even stronger winds, so we had no choice but to heed the advice of the Frenchman, and wait out the weather.  Luckily, El Chalten is Argentina’s self-declared “Trekking Capital” so is full of an odd breed – the walker. 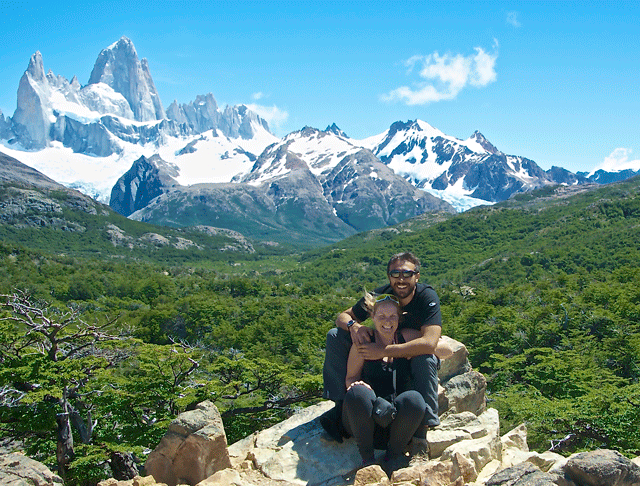 Finally, a decent photo of us. We had to kill 8 walkers to get here

Showing off the skills they should have mastered by the age of 5, walkers strut along the trails with their overladen backpacks and lightweight walking sticks, believing that they’re the reincarnation of Sherpa Tenzing attempting to summit Everest.  In spite of being similarly attired, they barely acknowledge your presence when giving way at narrow sections.  Nor does it stop them walking you off the path as they relentlessly march to their destination.

Having walked the walks, clashed with the trekkers, and been blown over by the wind, the weather had finally calmed sufficiently for us to attempt to cross to Chile and begin the Carretera Austral.  Cyclists have a choice – head 600km north in Argentina surrounded by pampas, wind, and wilderness, or head to El Chalten for 60km of cycling interspersed with a couple of ferry rides.  If it sounds easy enough, it was anything but.

Needing all the help we could get, we had decided to go mob-handed, so enlisted the help of a couple of Swiss cyclists – Sid and Remy, who were younger, fitter, and somewhat unsurprisingly, faster than us.  Having made good time to the ferry, and in spite of the first puncture of the trip, we crossed Lago Desierto, and were stamped out of Argentina.  We camped on the lake (I am unsure as to technically which country we camped in) with a view of the awe-inspiring Mount Fitz Roy. 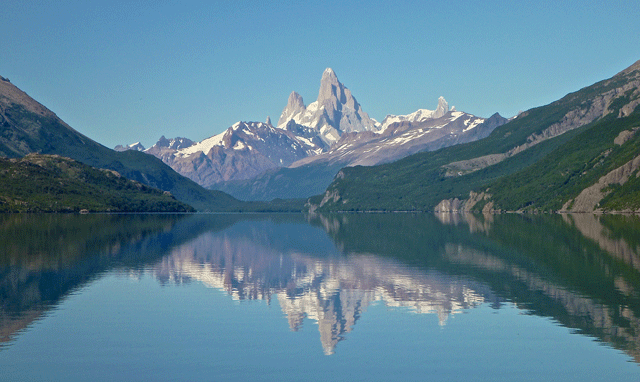 The view from our camp at Lago Desierto

The next day began in high spirits, which were soon crushed as the trail rose.  After running out of puff whilst pushing up yet another hill, I began a tirade of expletives that would end some 8 hours later.  I cursed the bike, the weight, Mel’s ridiculous clothes bag (her pannier of clothes, inclusive of denim miniskirt, is somehow on my bike), anything to distract from my own shortcomings.

We hauled the bikes upwards through 2km of ruts, where Mel set about smashing the pedals into her calves and shins (two weeks later and the bruises have only just faded), before we entered the forest, where we were set upon by wave after wave of horseflies.  The harassment was constant, and their bites were like being repeatedly poked with red-hot needles.  Thus began my rather rapid descent into insanity. 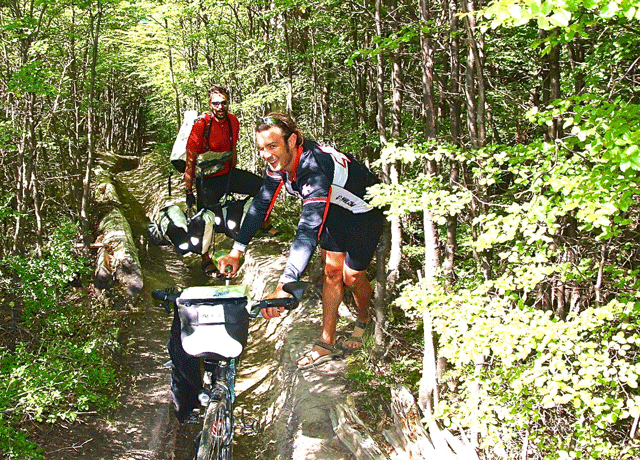 Sid pushes Chris’ bike through the ruts, whilst a distressed Chris looks on.  Photo courtesy of Remy

At one point we thought it would be quicker to ride the bikes.  I ended up in a ditch after 15 seconds, whereas Mel crashed so spectacularly that the Swiss were amazed she escaped unscathed.  Having stopped for lunch, the Swiss, who had no doubt tired of me bellowing “PRIIIICKK” as my front pannier was knocked off for the umpteenth time, abandoned the farce and left us to our own devices.

In total, it took 5 hours for us to cover the 7 kilometres of forest.  Emerging from the woods, utterly demoralised and dishevelled, we found our unscathed Swiss friends relaxing in the shade of a tree (Remy managed to keep his feet dry by using all the “bridges”.  We went straight through the rivers).   Although we still had another 15km to go, which included an obscenely steep final 7km downhill, we limped to the border post, and were stamped into Chile.  We caught the ferry the next day and had a mini-reunion with a number of other cyclists including our Dutch friends, Karen and Gijs, and Pablo, the world’s slowest (sorry buddy!), and probably only Vegan cycle tourer. 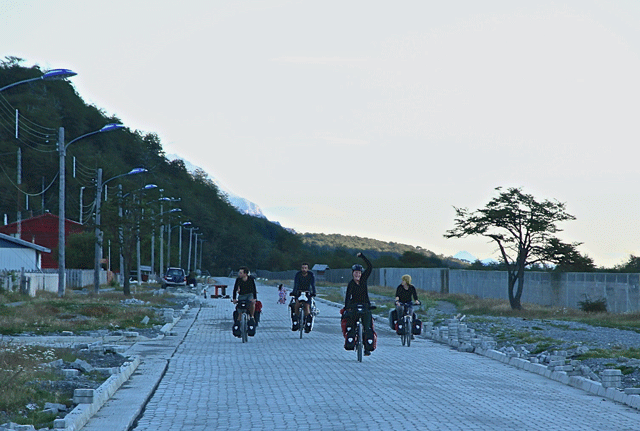 We took a couple of days rest in Villa O’Higgins, before taking our first tentative pedal strokes onto the Carretera, which at times was ridiculously steep, but has offered us some breathtaking views.

Just your average day on the Carretera

As ever, nothing runs entirely smoothly for us.  Having spent all morning slogging up stupidly steep hills from Puerto Yungay (10km in 2 hours, King of the Mountains we are not), we had finally broken the back of the hills and were about to head downhill, when my back wheel flattened again.

Like a pair of chimps struggling over quadratic equations, we spent 2 hours in the midday sun changing the tube, and trying to figure out why the back wheel would then not run freely.  After tinkering with the brakes we were finally underway, and speeding past a huge gorge.

I shouted ahead to Melanie “Look at this, isn’t it amazing” when all of a sudden, BANG.  My back wheel had blown out, and I came skidding to a halt rather close to edge of the road, and as the roads around here do not have barriers, the depths of the gorge.  Upon closer inspection, we had managed to adjust the brake block onto the sidewall of the tyre and the friction from the heavy breaking had caused the tyre to fail.

With the tyre now changed, we made our way to Tortel, which other cyclists have described as “just like Venice”.  Venice it was not.  Undeniably beautiful as it was, the visit was characterised by the obligatory awful Chilean customer service, delivered by women who bear more than a passing resemblance to Shrek, albeit with less teeth. 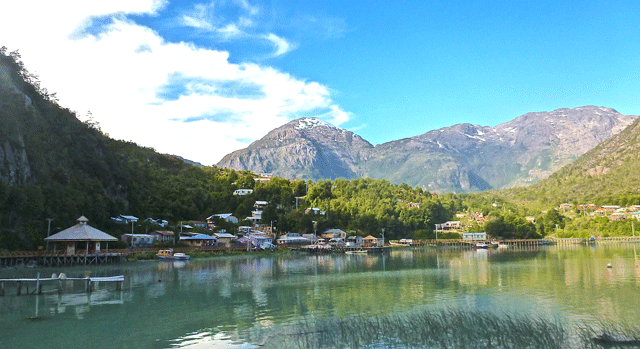 We were due to leave the next day, however as I loaded the bikes that morning, Mel declared that she had been unwell for some time, and therefore wasn’t fit to cycle.  We decided to stay for as long as our ever-dwindling supply of cash would allow – one day.  Low on funds, and with Mel’s bowels barely holding, we cycled the 112km to Cochrane in 2 days, only to find upon arrival that the town’s single ATM did not accept Visa cards.

With around $12 in our pocket, we managed to find a reputable money changer (the bloke that ran the cab firm) to change some of our Argentine Pesos at a rather unfavourable rate.  Chris, being the hero of the hour (and author of this blog), volunteered to selflessly take a bus to the next town to get cash and medicine for Mel.  Returning to a heros welcome two-days later, laden with drugs, proper bread, and a wedge of cash, we  continued the journey.

Which brings us up to now.  We’ve cycled two days north, and have made it to Puerto Rio Tranquilo, having met many southbound cyclists along the way.  Mel isn’t really any better, so we’ve taken a rest day, and have vowed to visit a doctor in Coyhaique (as opposed to me walking into a Pharmacy and miming the symptoms of diahorrea and vomitting), which should is about a 4-day cycle away.

featured
← Previous The one where we cheat a little bit and Mel falls over. A lot.
Next → The one where Melanie gets really sick and ends up in hospital