The one where we cheat a little bit and Mel falls over. A lot.

We cheated.  We took a bus from Punta Arenas to Puerto Natales.

Now that’s out of the way, we can resume the story.  We signed off the last blog on Mel’s birthday.  After returning to the room to find Mel in tears again (apparently petrol station food isn’t for birthdays) we decided to head out, only to find that Punta Arenas is 99.8% closed on Christmas Day.  Wandering the deserted streets the only open establishment we could find was the casino.  Mel had an overpriced chicken and avocado sandwich.  Happy birthday Mel!

We pedalled out of town on the 27th, with the weather forecast predicting strong crosswinds.  We were initially fortunate to have 25km of tailwind, until the road changed direction and with it, the wind.  Having been nearly blown under the wheels of a truck for the fifth time in as many minutes, we decided on self-preservation, so cycled back to catch the bus.

Arriving in Puerto Natales, with Chris still brooding about not cycling every inch, we decided to find an activity other than having nothing to talk about.  A local travel agency was more than obliging and suggested horse riding.  Mel has been on at me for years about going horse riding.  Pining for her more youthful days, when two-day rides with a night spent in a hay barn were common, she’s been desperate to get back in the saddle ever since.  On the other hand, I have always been adamant that it’s cruel for them to carry a big lump like me.  We booked it anyway.

After being picked up in a van that certainly wouldn’t pass its roadworthy anywhere else in the world, we arrived at the ranch to find a bunch of nags barely fit for the glue factory.  After an inadequate safety demonstration (“Don’t walk round the back of the horse, pull this way for left, this way for right, and this way for stop.  Vamos!”), we gracefully mounted our steeds and wandered off onto the estate. 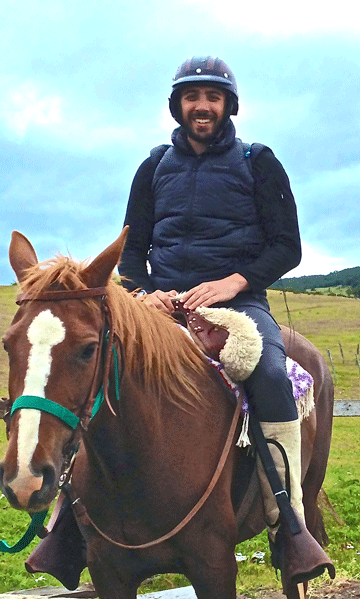 Don’t be fooled, this horse is a twat

As we descended our first steep hill, we suddenly realised that this wasn’t going to be a leisurely afternoon stroll in the sun.  We crossed our first river of the day at which point my bastard nag began to misbehave.   After passing through a gate, the horse decided it had had enough, turned round and started wandering back home.  After we came to a standstill in the middle of a river, it became apparent that my horse needed a firm hand, something it was not getting from my limp-wristed rein technique.

After some instruction from our guide, the horse and I begrudgingly accepted our fate for the day and there began to be some understanding between man and beast, until we had to cross a downed fence.  After the guide effortlessly took his horse over the wire, it was up to me to lead my fellow riders through this tricky situation.  As we approached the obstruction, I gave the horse a nudge and it began to mince through the wires.  All was going well until its hoof got stuck causing it to rear up and nearly throw me off.  It was at that point that the guide decided it was best to pull the horses over the fence by their reins and we slowly made our way back home.  I vow never to get back on a horse again. 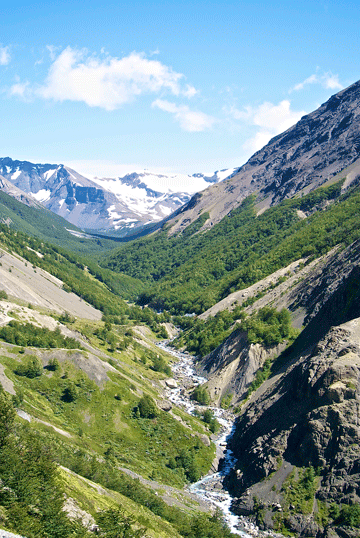 On the way to the towers

The next day we rose with stiff legs to attempt our next activity, climbing up to Base De Las Torres, three gigantic granite monoliths in the Torres Del Paine national park.  It was a beautiful day with scenery to match, and although it took 4 hours and a number of panic attacks, scrambling over the last rocks to the summit made it all worth it.

The three towers were loomed large over a green lake, which tumbled down to the valley below.  The moment was only slightly spoilt by the obligatory group of Israeli youth taking photos of their bare arses in front of the towers.

The descent back to the car was its usual eventful self, with Mel sliding down the mountain, ending up on her arse on at least 4 separate occasions. 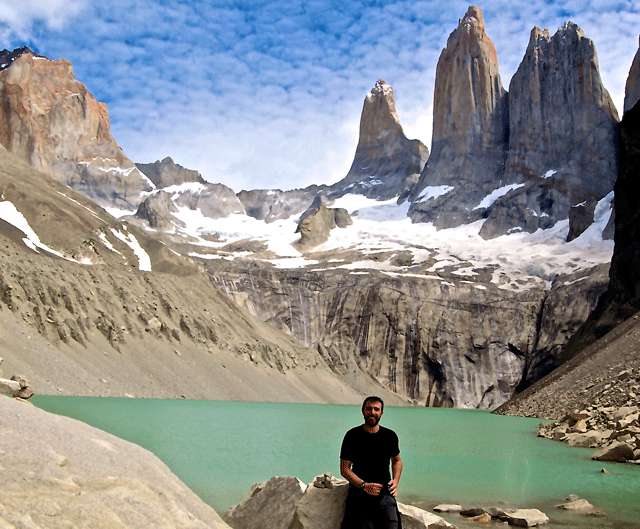 Me at the top

Rested and well fed, we left the next day with stiff legs and 60km to cycle to the border, however the sun was shining, and the scenery was nothing but spectacular. 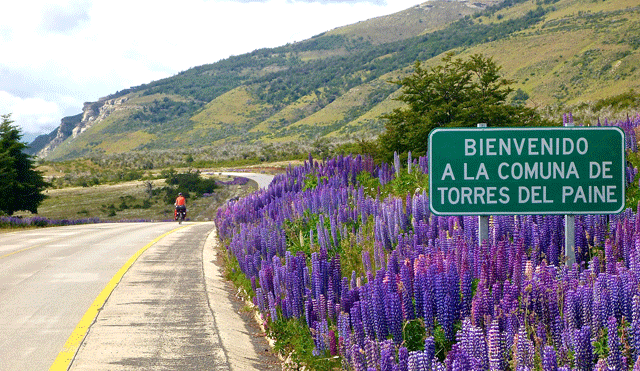 Crossing the border into Argentina, the map showed that we were due to reach Ruta 40, a road classed as “natural” by the locals.  The road turned to gravel, and then 30km later, mud.  Having successfully negotiated 40km or so, I was pedalling ahead and listening to dubstep, a genre of music that appears to be based upon the sounds of an industrial saw mill.  As the music bashed and crashed, I heard what appeared to be a drawer of cutlery falling to the floor and a very faint “Khruuusssss!”.  I turned around to find this: 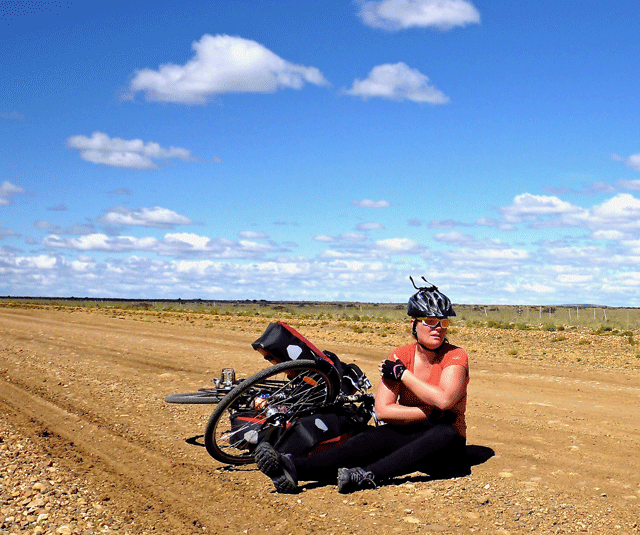 Mel, the bicycle, and the road had somehow melded together.  As I rushed back to her to find out what had happened, her front wheel had hit some soft sand and she had gone over the handlebars.  Although a little shaken, there were no broken bones and being in the middle of nowhere, we had no option but to carry on.  We soldiered on for the rest of the day, culminating in a freewheeling 12km downhill, which made it our biggest day so far, 98km.  It’s almost as if we’re proper cycle tourers now!

Cycling to El Calafate the next day, Mel was doing her upmost to swallow as many flies as possible.  At the last count, 8 had been ingested, and somehow she managed to get one in her ear.  The Perito Moreno glacier, one of only a few in the world that is still advancing (take that global warming!) lives here, so we had no option but to pay it a visit.

Having never visited a glacier before, it was an incredible sight, and the sound of the ice falling away from the glacier and crashing into the lake is hard to put into words.  Unfortunately, we’ve struggled to get a decent photo of the two of us in front of the thing, so this will have to do. 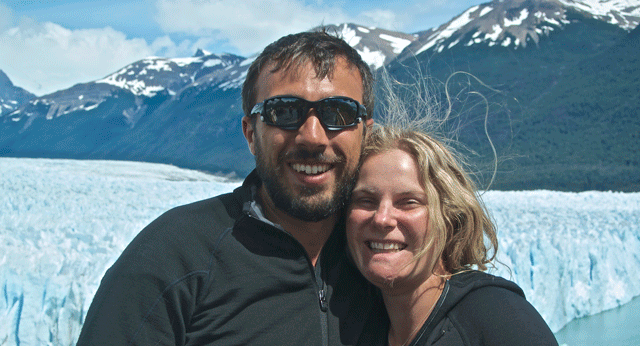 Which brings us nicely on to today.  We’ve done some bike maintenance (Mel is now doing her own thankfully) and have got roaringly drunk with our sexy Dutch friends, who have finally arrived after grinding into a headwind for the last 3 days.

We leave tomorrow heading towards El Chalten and then the Carretera Austral, where, according to the other tourers, we’re going to have to carry the bikes across rivers.  Sounds like fun!

Happy New Year to you all