The one where Mel returns and Chris rants

Whether they are behind the wheel of bus, truck, or car, Peruvian drivers are all, for want of a better word, arseholes.  It is the only conclusion I can draw after being harassed by them for the best part of two months.  They all pass too close, constantly cut you up, and heaven help you when the shoulder becomes an impassable jigsaw puzzle of fractured asphalt and sand, as that’s when the beeping starts. 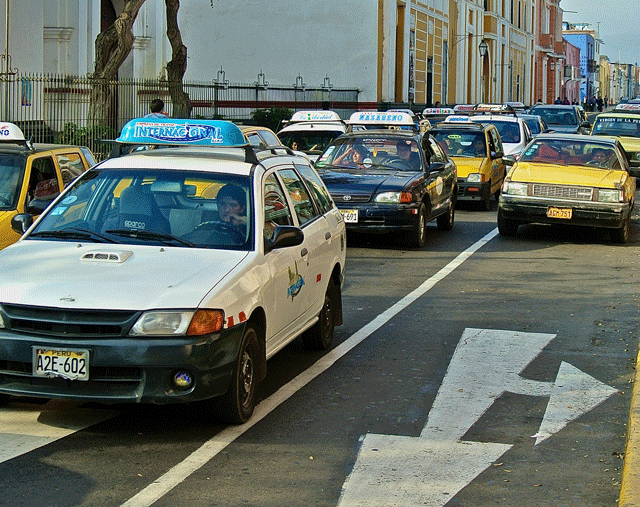 Motorised Peruvians – a danger to us all

There is absolutely no rhyme nor reason to it.  I still haven’t worked out which is a friendly toot of encouragement, which is a polite beep to say they’re passing, and which is a “GET THE FUCK OUT OF MY WAY!” honk.  The only constant is that it is unrelenting, so much so that by about 3 o’clock, I am utterly incandescent with rage and giving every other driver the finger.

Whilst we’re on the topic of things that boil my piss in Peru, lets talk dogs.  In Chile, we would occasionally be chased by them.  In Bolivia, they were somewhat conspicuous by their absence, which leads me to speculate that the locals may well be eating them.  But in Peru, they’re absolutely feral.  Like a greyhound in pursuit of a hare, they chase you along the highway in the vain attempt to rip out your Achilles.  The situation is made worse by the slack-jawed owners, who look on as their beloved pets attempt to maul passing cyclists. 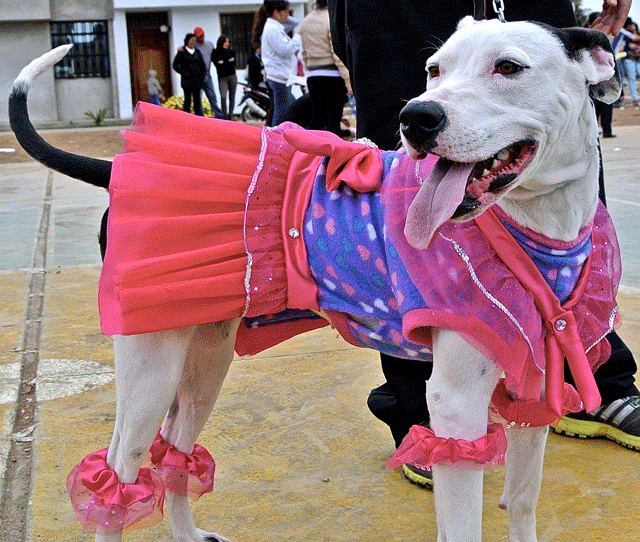 It has now become so bad that I have taken to stopping my bike, and, in the absence of owning bear mace, throwing stones at them.  Luckily for the dogs, my aim is awful and I’ve only managed to hit one in about fifteen attempts.  So I’m making this a call to arms for fellow bicycle tourers – if a dog does chase you, please stop and pelt them with something hard (like a brick).  It’s the only way they’ll learn. 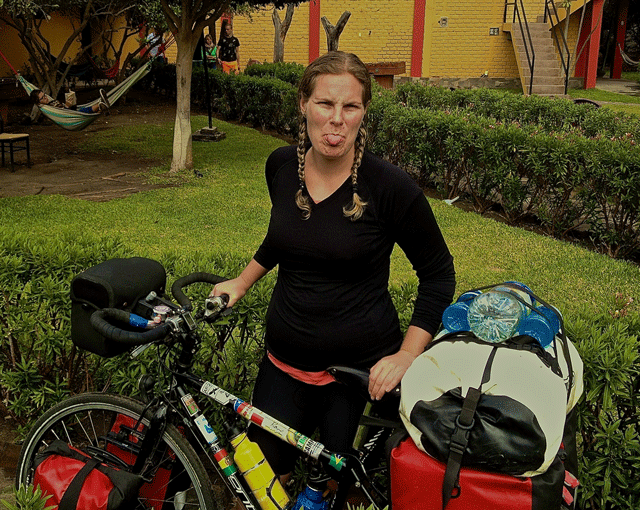 It was time for us to leave the oasis at Huacachina, and for Mel to make her long awaited return.  Having spent the last 6 weeks cycling like a maniac, it was good to have my old buddy back, if only to have someone to sing along to Tina Turner with.  The transition to Mel’s more sedate pace was somewhat trying, but we made our way toward Lima, doing some boom and bust cycling (Day 1 – 107km, Day 2 – 61km, Day 3 – 132km!!) along the way. 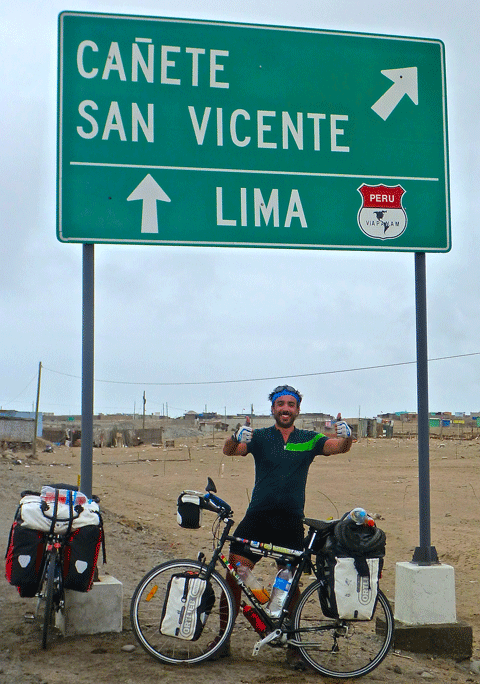 The ride out of the Peruvian capital was hellish.  A policewoman had to chase off a couple of suspicious characters who took a shine to our bikes, men made lewd gestures at Mel, and the drivers were at their wankerish best.  After 4 hours of cycling along the frankly terrifying, shoulderless highway, we were finally out of town. 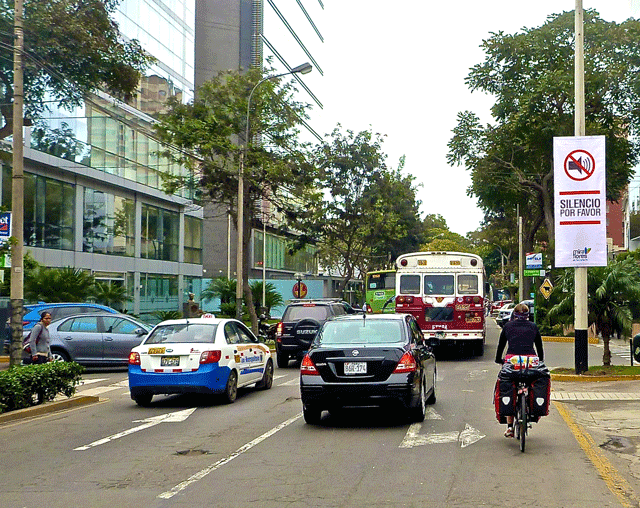 Central Lima – the nice part of town. It only got worse from here. Note the sign asking the drivers to stop beeping. Do you think it stopped them?

We had 500km of road before we made it to Trujillo, which took us through endless mist-shrouded desert.  This makes for uninteresting reading (read – I can’t be arsed to make it sound interesting), so instead of bleating on about hills and sand, reader, I present to you, edited photo highlights. 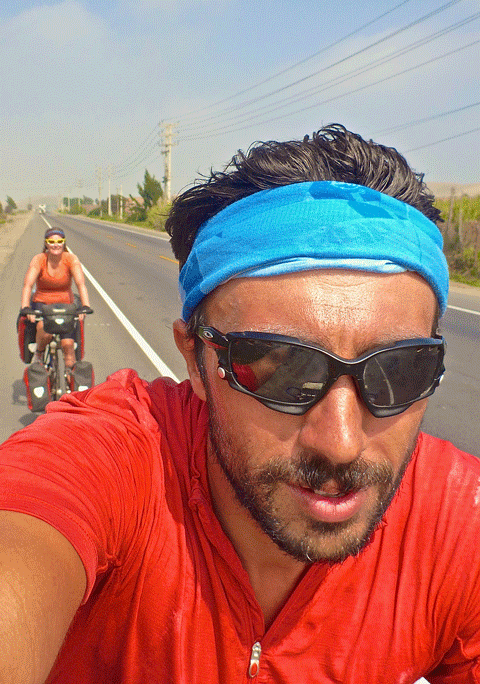 Away from Lima, the road quietened a little 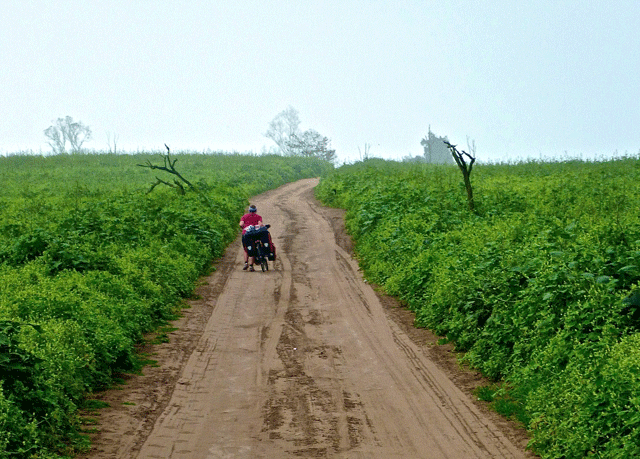 We saw a sign for a campsite off of the main road. 6km of dirt road, with gradients of up to 13% later, we ended up camping in the car park instead 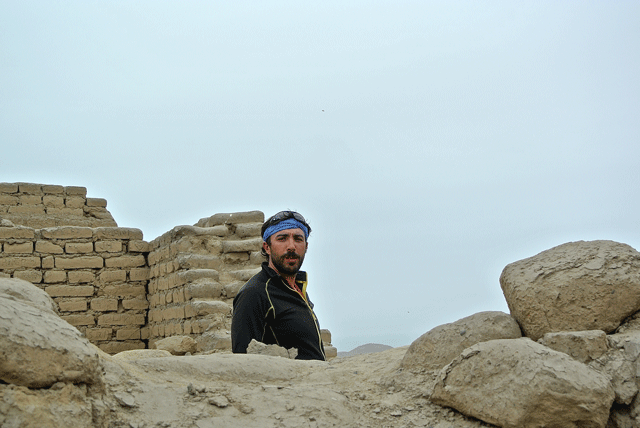 A confused looking Chris wanders around some Chimu ruins 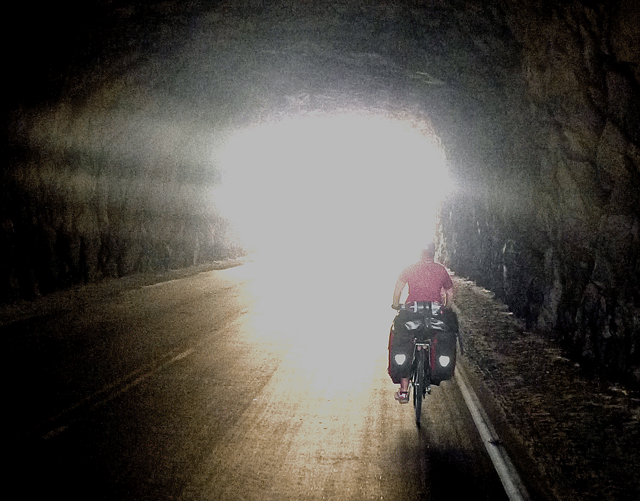 Mel rides toward the light 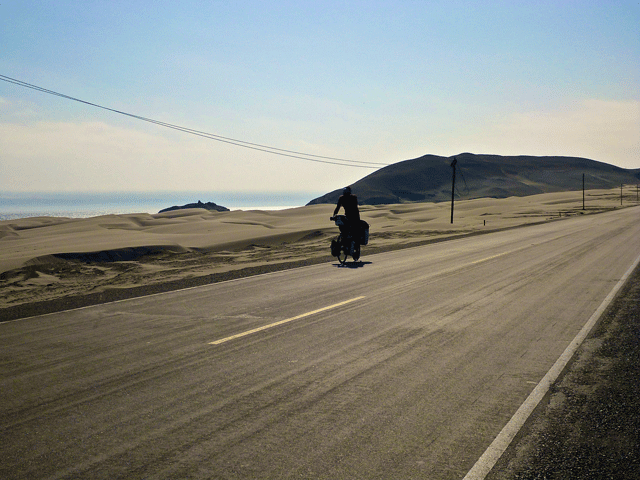 Which lead to this coastal road 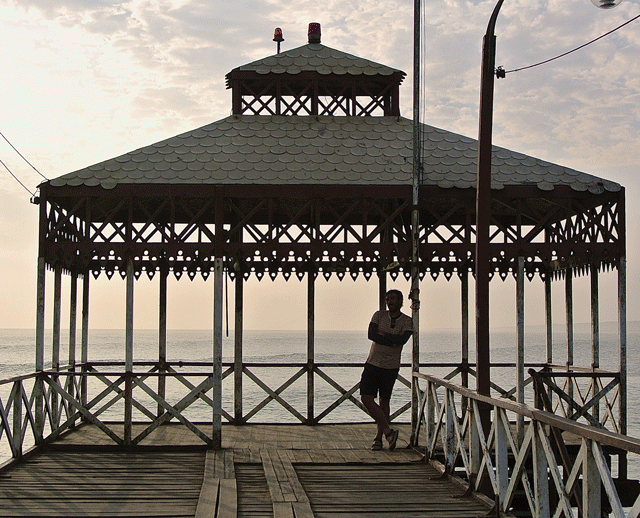 Sundown on a pier 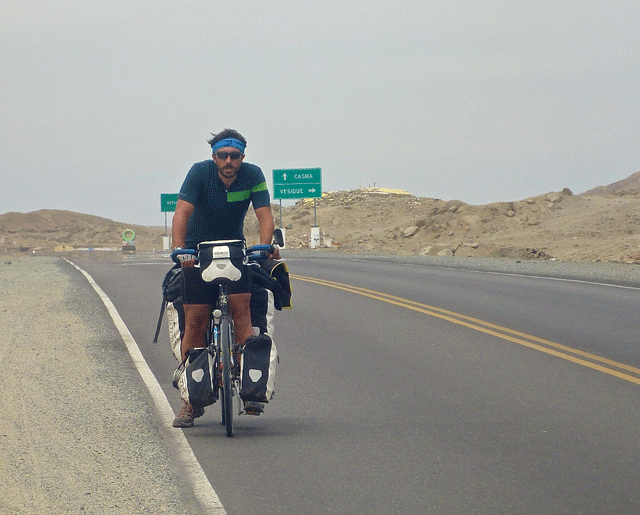 When I was 9, I had a BMX with no brakes, so I used to stop with my feet. It’s a little more difficult as an adult on a fully laden touring bike 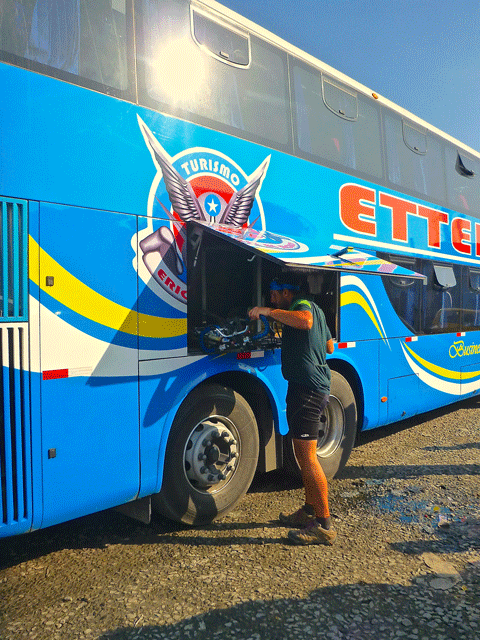 Wait, what?  They took another bus?

Yes, along the way I managed to snap three spokes, so with no back brake, and a barely functioning front one, my braking distance was akin to that of an oil tanker.  Killjoy Mel refused to accept my argument that having no brakes was not dangerous, but adventurous, so with my dreams of cycling at least one country in full dashed, we bussed the remaining 130km to Trujillo. 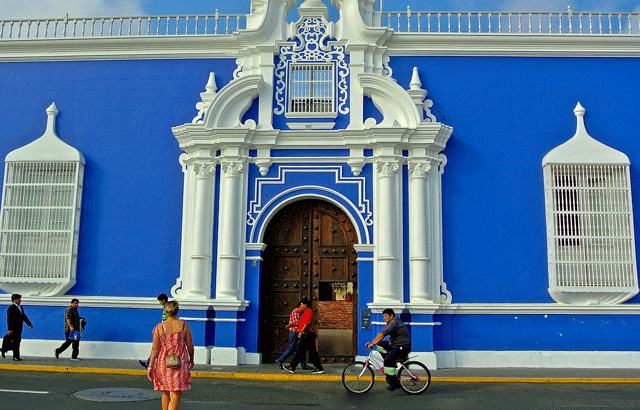 Founded by Spanish conquistadors in the 16th century, the city of Trujillo is surrounded by the remnants of two pre-Incan civilisations – Moche and Chimú.  We visited the dull Chimú capital at Chan Chan, which, having been built out of sand around 700 years ago, has been dissolved by centuries of rain, and left a lot to the imagination. 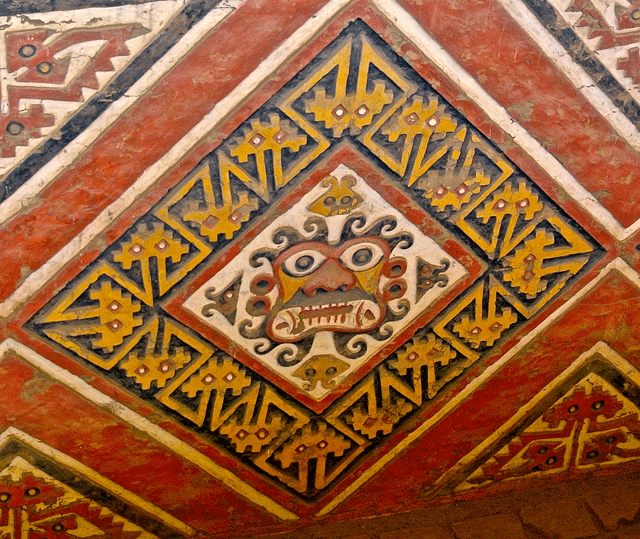 Sadly, we weren’t allowed to take photos of the ceramics, so here’s the Moche mountain God instead

Yet the 1400-year-old Huaca de la Luna (Moon Temple), which until 25 years ago was under a sand dune, was far more impressive.  Even I was astounded by the intricacies of the Moche ceramics, and that’s saying something.

With the sites seen, it was time to seek out Lucho, a figure legendary amongst the cycle touring community.  Lucho has run the Casa de Ciclistas in Trujillo for almost 30 years, and his guest books, with entries dating back to 1985, are a who’s who of many a long-distance cyclist.  We were somewhat apprehensive about staying in the Casa, as we had visited friends staying at the one in La Paz and that resembled a squat, only with more Ortlieb panniers lying about.

Lucho took us in, and I told him of my bike woes, which prompted him to ask just how heavy I was (weight at Nazca – 106kg, heavier than when I started).  He drew the same conclusion as the cocky Bolivian “mechanic”, that maybe I am too heavy to ride. 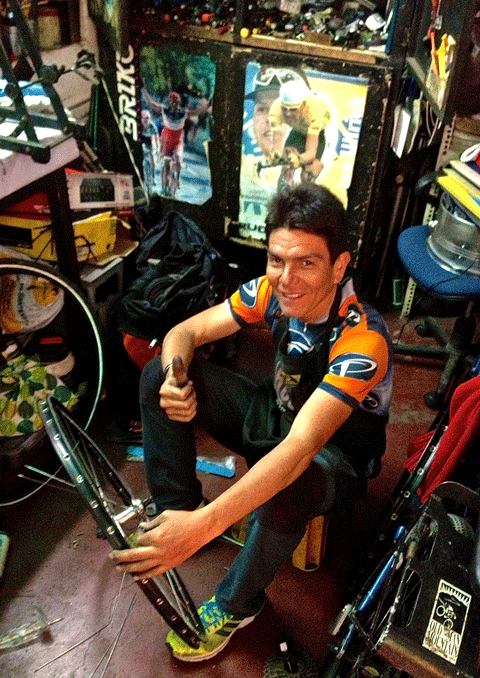 Lucho doing what he does best

He pronounced my back wheel dead on arrival, and proceeded to spend the next three hours building me a new one.  To repay all his hard work, myself, Mel, and the three other cyclists staying at the Casa, volunteered at a cycling day for some local kids, organised by Lucho.  All was going well until the last race of the day, whereupon a 12 year-old girl riding Mel’s bike failed to break into the second corner, and went head first into a tree, causing the race to be abandoned. 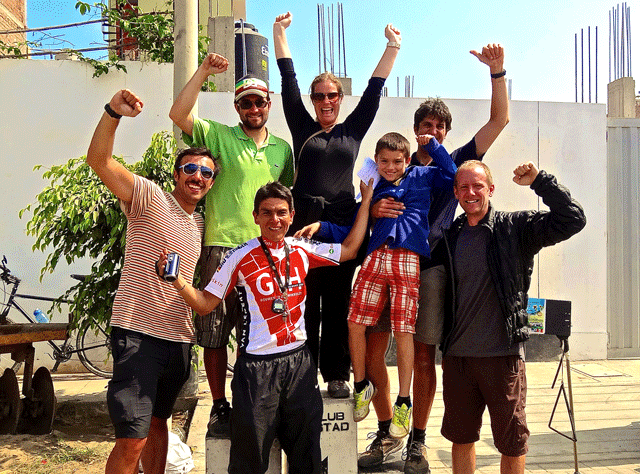 The girl was shaken, and suffered a few cuts and bruises, so we are now waiting for Lucho to assess the damage to Mel’s bike, before we hit the road again toward the fifth country of the trip.