The one where Chris rides solo – Part III

If you’ve ever wondered what Mel gets up to whilst I’m off gallivanting on my bike, she watches endless episodes of American crime dramas works to fund the rest of our trip.  So with The Who playing in the background the sound of fingers mashing our MacBook keyboard, I headed out the door to cycle from Puno to Arequipa. 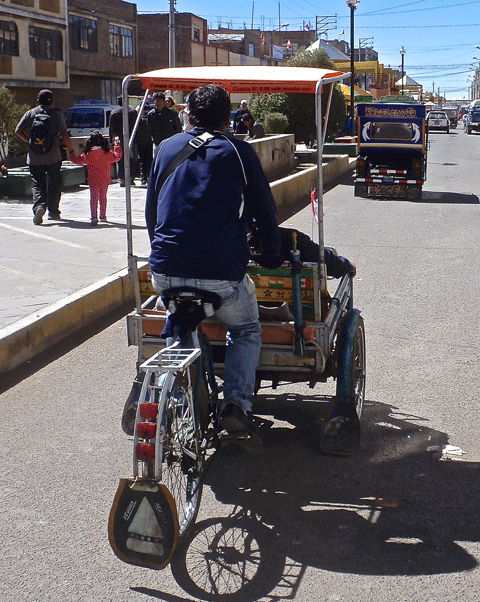 A cycle rickshaw on the way out of Puno. I’ve ridden one of these with Mel and the driver in. Bloody hard work!

Leaving town, I paid a visit to some bicycle mechanics to see if they could solve my pedal problems.  Sadly, they looked at my bike like it was some kind of alien technology, so off I went with my wobbly pedals still giving me grief.  As so often happens, my GPS, who I think may actually be conspiring against me, sent me up a hill so ludicrously steep that it proved unrideable, so I had to push my bike out of Puno, and finally made my way toward Juliaca. 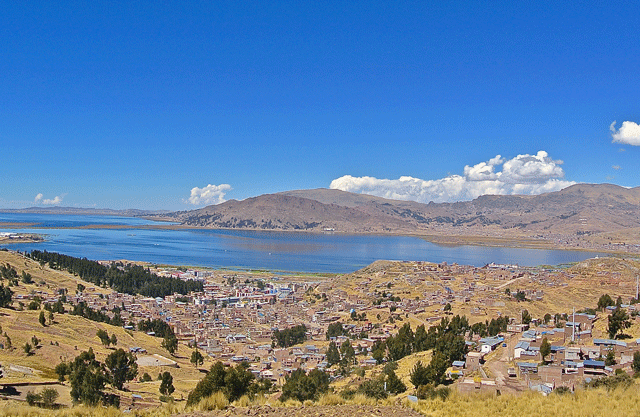 The roads for the remainder of the day were flat, but the day after the hills began in earnest.  As I spiralled ever upward, the steep climbs at over 4000 metres proved taxing.  Camping that night, temperatures dropped to well below freezing, and in spite of being offered a night in a local family’s house due to the cold, I politely declined as I was already snuggled up in my sleeping bag. 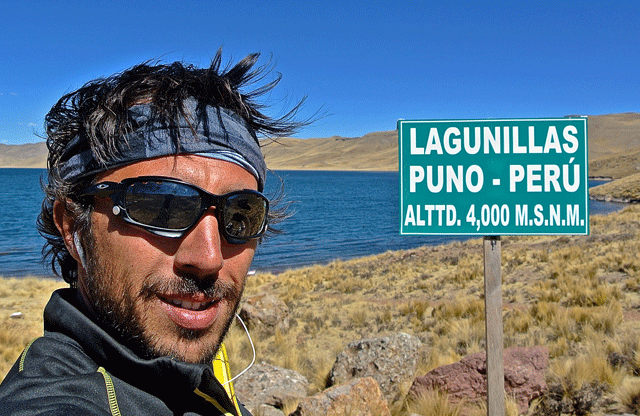 Selfie at 4000 metres above sea level

The next morning I packed up my ice-covered tent, and eventually crossed what I hope will be the highest point of the trip, 4413 metres.  It was downhill from that point on, and it was only the Peruvian drivers, who enjoy playing chicken with oncoming cyclists, that slowed my descent into Arequipa. 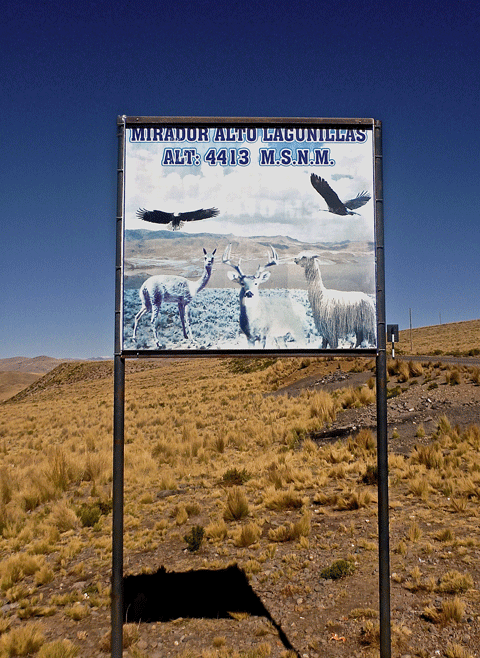 With over 140km covered in a day, I had arrived earlier than expected.  Mel was on her way by bus, and I had managed to get my bike repaired, so I took a stroll through the city’s 400-year-old convent, which was so tedious that I failed to take a single photo. 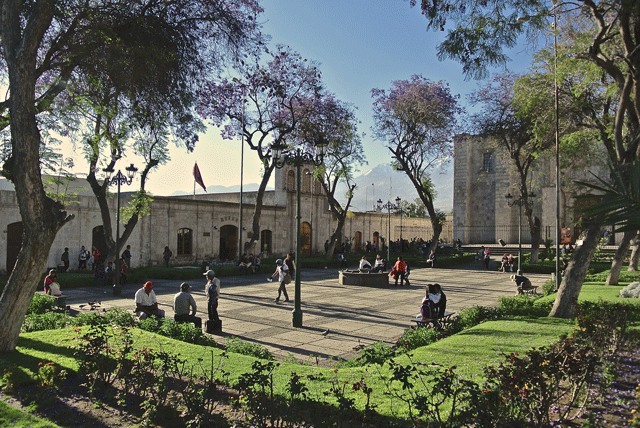 One of Arequipa’s lovely plazas

If you can remember back to La Serena in Chile, Mel’s tooth fell apart and we had to hang around waiting for it to be repaired.  Fast forward another couple of months to La Paz, and the same tooth abscessed and we ended up back at the dentist.  Well guess what happened next?

Yep, we were back in yet another dental surgery.  The tooth still wasn’t right, and the diagnosis wasn’t good.  Mel needed a root canal.  With the dental surgeon not due in for another week, we headed off to Colca, home of the world’s second deepest canyon (4,160m).  We passed over the same roads I had ridden just days earlier to view this spectacle, yet upon arrival our views were blocked by a mass of tourists waiting to see some poxy condors. 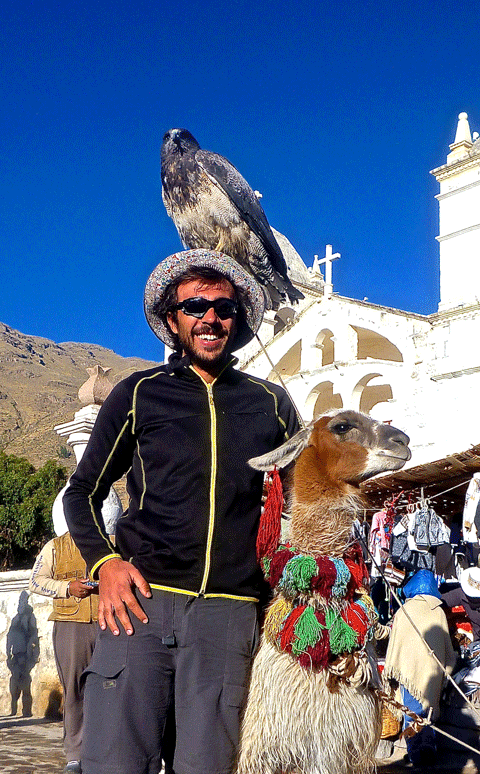 Why wait around for some condors when you can just pay a lady to put an eagle on your head instead? 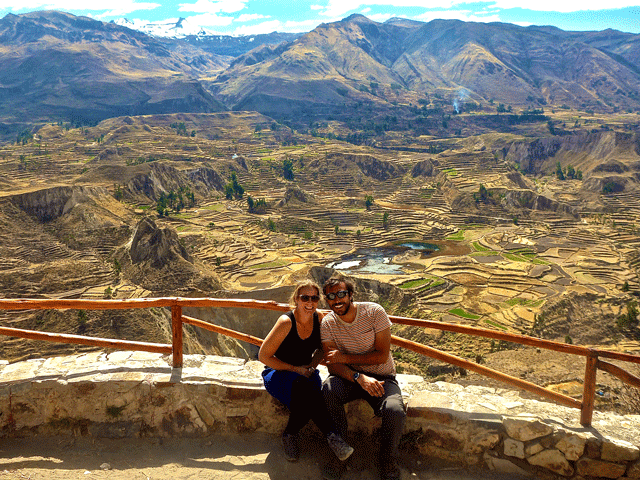 No condors in this pic either

Having spent the last 8 months outdoors, we’ve seen a number of large black birds milling about on thermal currents, so we passed on the idea of having to wait around for them, and followed the trails along the cliff edge, peering into the ominous depths below. 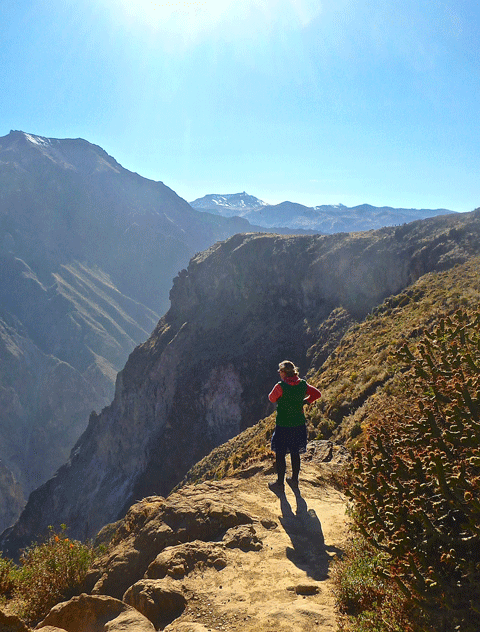 Mel ponders just how far it is to the bottom

We returned back to Arequipa, and with Mel not due to see the dental surgeon for another week, she checked us into to a cheaper, more comfortable hotel.  Sadly, her choice of accommodation proved to be interesting, as it turned out that she had moved us in to Arequipa’s one and only “love hotel”. 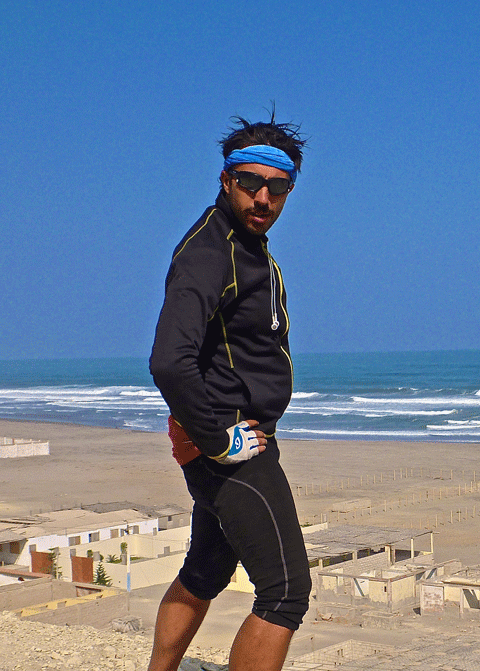 It was a beautiful ride at times.  Parched deserts descended into verdant valleys, and the road eventually spat me out at the Pacific Ocean.  Having only recently realised that we had entered the Tropic of Capricorn whilst in Chile, I was expecting palm fringed beaches and golden sands, but what I got was rather different. 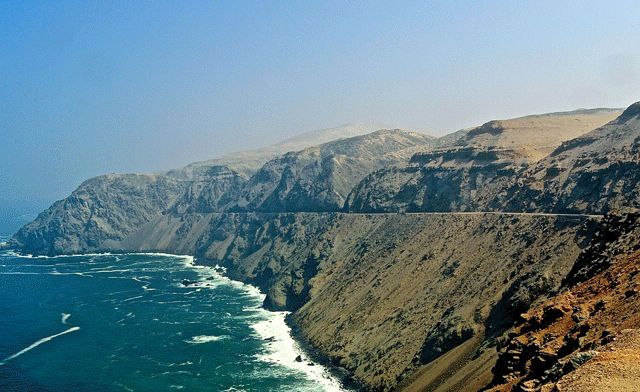 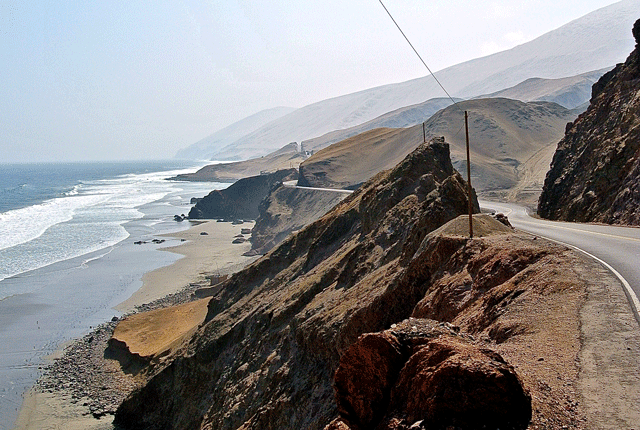 Obligatory photo of a road stretching into the distance

Friends in the know had told me that all my high altitude cycling would have greatly increased my red blood cell count.  I hadn’t a clue what they were on about, until I “flew” up my first hill at sea level.  With my newfound fitness, I was covering huge distances in relatively short spaces of time.

Five days and 560km later, I pulled into the town of Nazca, home to the famous Nazca lines.  There is no commonly agreed upon explanation as to why the lines were created, but they have dated the creation of the geoglyphs to anywhere between 400 and 650AD.  Having been warned off taking a flight over the lines by a couple on the tour to Colca, I ignored their advice and booked one anyway. 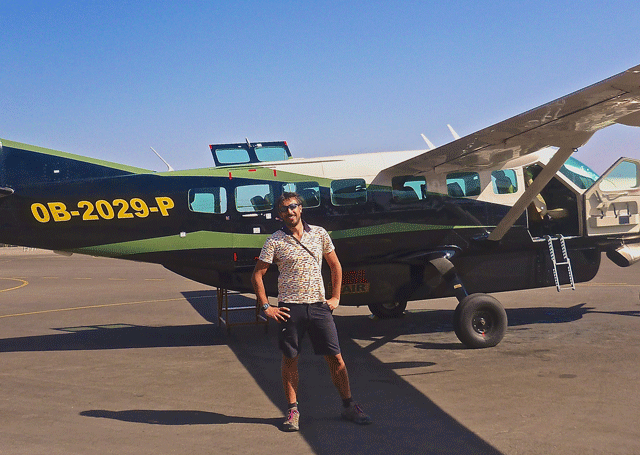 Mel had seen the lines on her previous visit to Peru, and had warned me that it could be a bumpy ride, so it would be best if I avoided breakfast.  I took heed of her wise words and headed to the airport on an empty stomach.  Our group of 14 boarded the plane, and minutes later we were up in the skies, admiring the view.

Soon enough, our guide announced “on the left side, condor”.  I peered out of the window and saw nothing.   There were so many lines on the desert floor that it was like attempting one of those Magic Eye optical illusions that were popular in the 90’s.  Then the plane banked. 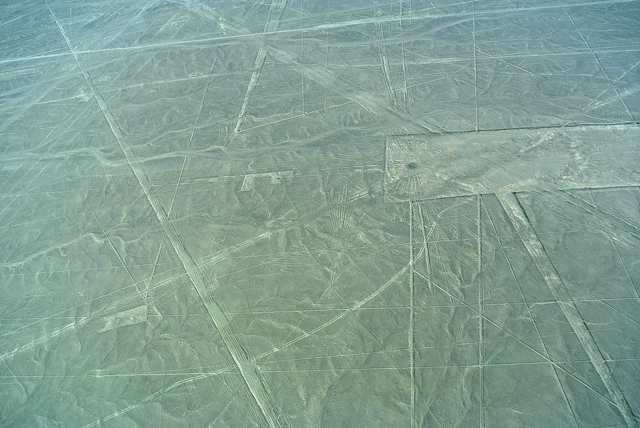 There’s a drawing about 100m wide in amongst all those lines. A quid to anyone who spots it

In all of my 33 years, I have never suffered from motion sickness, but from that moment onward, I struggled to keep whatever was in my stomach down.  “Right side, astronaut” exclaimed the guide, and still all I saw was nonsensical lines.  We passed 5 more giant drawings, of which I could make out none, and with every manoeuvre, I was feeling greener. 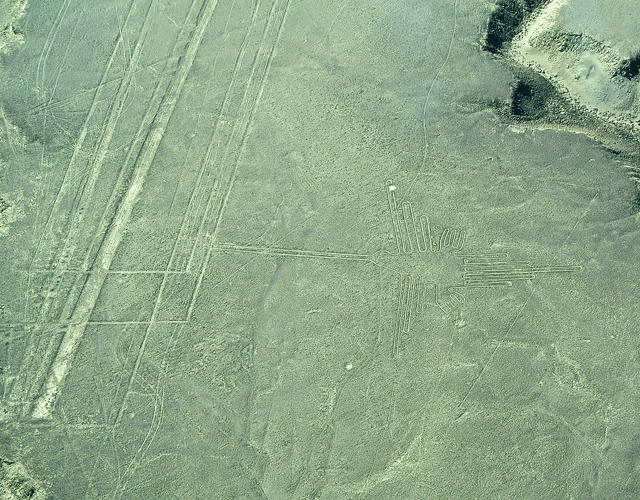 I spotted this one all on my own. It’s a hummingbird

25 minutes into the journey, I finally saw the “hummingbird”, at which point my stomach gave out.  I spent the rest of the flight heaving my guts into a sandwich bag, and as the cabin filled with the smell of vomit, the other 13 passengers looked at me with utter disdain.

Back on terra firma, I calculated what I got for my $90 – 40 minutes of nausea, 6 lousy photos, and a bag of bile. Well worth it I think you’ll agree.  Not wanting to hang around and embarrass myself further, I cycled toward my next destination – Ica. 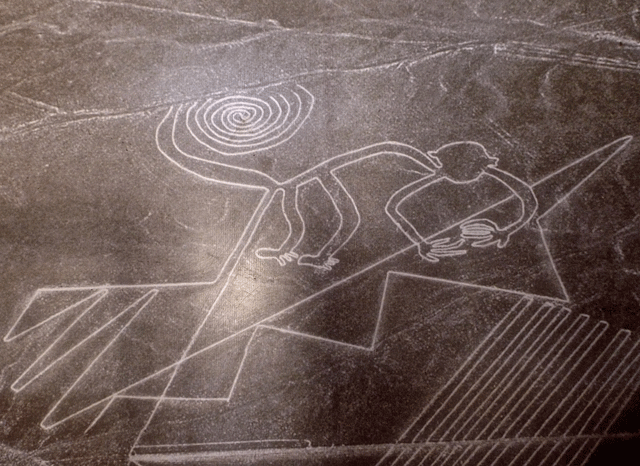 I could have saved $88 by just going to the museum and taking photos of the photos, just like I did here

I arrived the next day, only for my guidebook to tell me that Ica itself is a bit shit, and that I should be staying in Huacachina, a further 5 kilometres down the road.  As I struggled over the final hill, I rolled down into an incredible oasis, flanked on all sides by towering sand dunes. 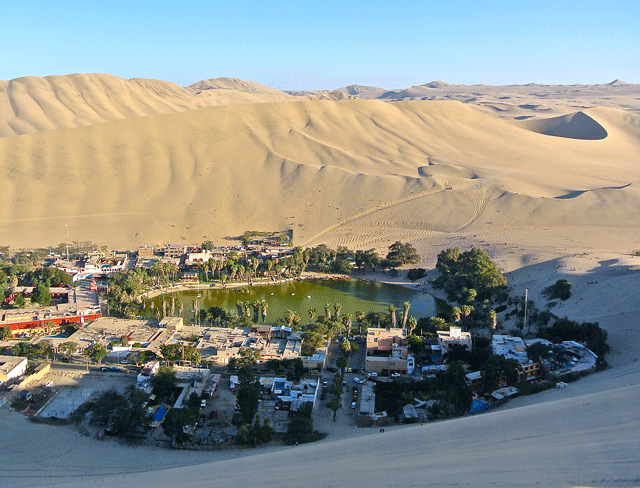 Huacachina – The Oasis of the Americas apparently 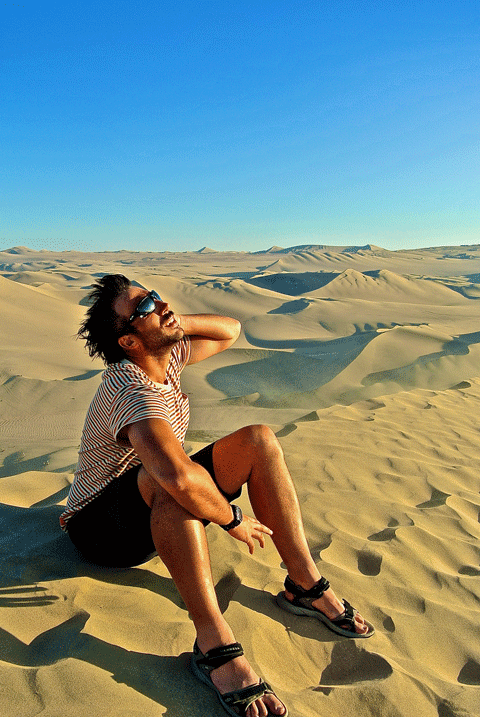 All of which finally brought an end my solo cycling adventures.  With Mel and bike in town, our journey will now continue as we follow the PanAmerican highway north.