The one where Chris rides solo – Part I

Yes yes, I know I said that the next blog would be a video, but I haven’t had time to even look at video editing software, so you’ll just have to make do with the usual boring text and photos.

I had finished writing the last blog at 2am, so when the alarm went off at 6 that morning, I was more than unimpressed.  I wanted to leave La Paz early as I hoped that the roads would be less chaotic than usual, so after a meagre breakfast, I rolled my bike down to the main street and began pedalling.  I lasted all of 20 minutes.

As the cars and minivans spewed their noxious fumes all around me, I found myself slumped over my handlebars gasping for breath.  The combination of altitude and pollution meant that my climb from La Paz (altitude 3,640 metres) to the sprawl of El Alto (4,150m) took two and a half hours. Such was my lack of speed, I was passed by at least 5 upward bound runners over the 13 kilometres! 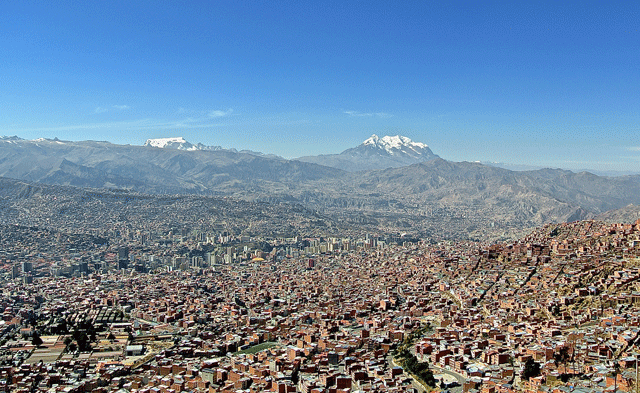 After two and half hours of climbing, the view of La Paz was pretty spectacular

Having cleared El Alto, I meandered south, with the road stubbornly remaining above 4,000 metres. Such rarefied heights caused me breathing difficulties on even the slightest of inclines, yet I was in luck.  Bolivia seems to be in the throes of massive infrastructure upgrades, which if the numerous billboards beside the road are to be believed, are being built by the Bolivian president himself.  From under his hard hat, Evo Morales’s face beamed down upon me whilst I rode on closed sections of freshly tarmacked road.  Whizzing along, I made good time, spending a night in the town of Oruro, before heading toward the comically named Lake Poopo. 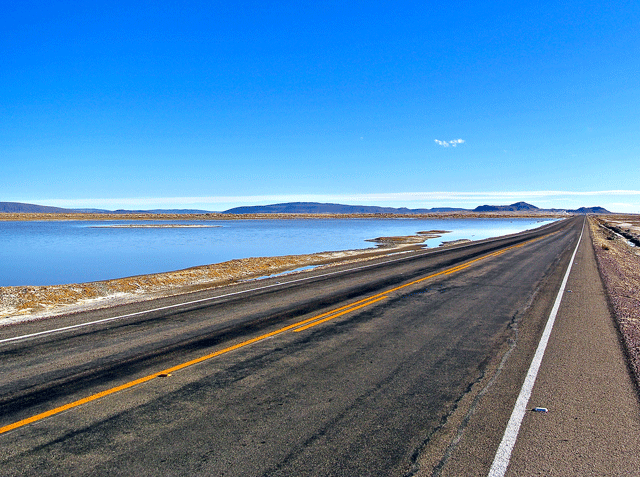 This isn’t actually Lake Poopo, but for the sake of narrative, pretend it is eh?

Villages came and went, and having spotted the thermal pools in the unremarkable hamlet of Pazna, I thought I’d take a chance.  The princely sum of 5 Bolivianos (60¢) entitled me to a half hour dip in some suspiciously murky lukewarm water, which left me feeling slightly more dirty than when I went in.

The road continued alongside the lake until the town of Challapata, where somewhat inevitably, another part of my bike failed.  I looked down to find not one, but two spokes in my rear wheel hanging freely.  With no way of repairing the damage myself, I removed both brake blocks and wobbled off on my now buckled and brakeless back wheel. 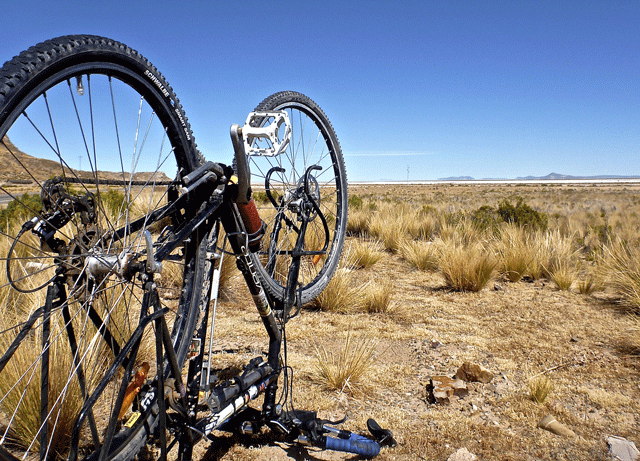 50 kilometres on, the town of Quillacas marked what I thought would be the last of the tarmacked road, so having been given some free fuel for my stove by a kindly local gent, I pedalled 20 kilometres on gravel, before I realised that I was riding north-west instead of south-west (Mel found this rather amusing whilst looking at our live map).  Fortunately, I didn’t have to retrace my tracks as a rough trail took me back to what turned out to be a brand new freshly laid road. 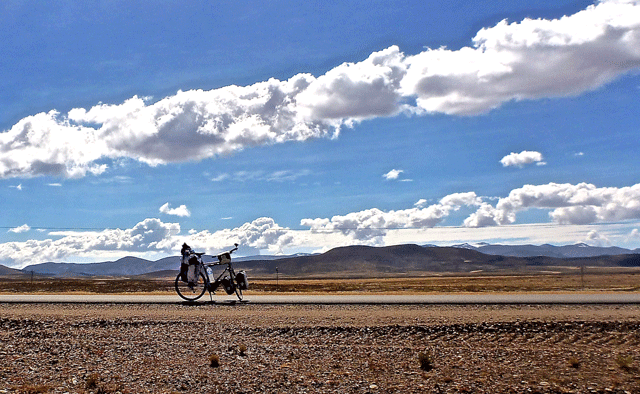 The deserted road led me through some very sparsely populated areas, which due to my now broken iPod, allowed me to reflect on my time in rural Bolivia, of which, I can draw the following conclusions:

1. Most Bolivian villages have a basketball court.  Number of people spotted playing basketball whilst cycling?  Zero.

2. In some villages, there are more pigs on the streets than people.

3. You can never tire of looking at llamas and alpacas.

4. Furthermore, llamas and alpacas do not appreciate being chased by a wild-eyed cyclist.

5. Not having a full complement of teeth appears not to be a barrier to procreation.

6. Up to the age of 5, Bolivian children, regardless of gender, will bear more than a passing resemblance to Dora the Explorer.

7. Ladies of a certain age wear bowler hats but not bras.

8. Handing over a 100 Boliviano note (roughly $15) to a shopkeeper will result in them looking at you like you have just molested their first-born child.

9. Bolivian folk music is best described as “plinky-plonky”.  It is also dreadful. 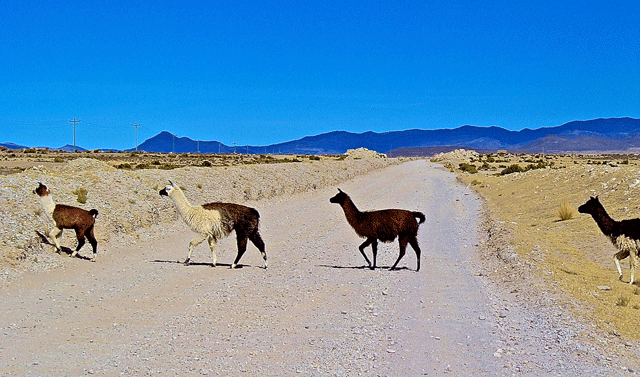 Arriving in the last town before the salt flats, Salinas, my GPS proceeded to die.  The odometer we use on this trip resides on Mel’s bike, so with the guide I was using indicating that I had only 18 kilometres of solid mudflats to go before I made it onto to the Salar, I decided to make an educated guess as to when I had covered the distance.  I grossly underestimated that I would have that distance covered in an hour, so after turning off the track I spent the next 45 minutes pushing across a combination of rocks and sand.

Still, the first 20 minutes of riding across the salt was amazing, yet it all went downhill from that point onwards. 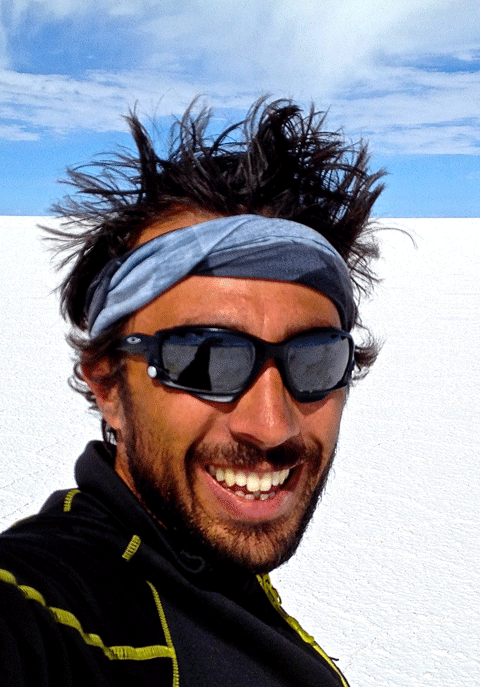 It’s all smiles in the first half hour…

Hour 2 – Fuck, Volcano Thunupa goes on for a while doesn’t it?  And now there’s a headwind.  Balls.  Looks like there are some flamingos over there.

Hour 3 – Why have I spent the last half hour riding around the volcano when I should be heading south?  Which way is south anyway?  I best try the as yet unused compass to work out where I’m going.

Hour 4 – Ah, south is that way.  I can see three “islands” on the horizon.  I wonder which one is my intended destination, Isla Incahuasi? Christ, white is boring after a while.  I wish my iPod wasn’t broken.

Hour 5 – You’ve been riding toward the wrong island for 20 minutes you dick.  Why not have some lunch and think about what you’re doing?

Hour 6 – You know what would make this more interesting?  Cycling naked.

Hour 6 ½ – Best put some clothes on now as a) there are some cars coming, and b) you’re in danger of getting sunburnt genitals.

Hour 8 ¼ – Jeez, that was like hammering pegs into concrete.  The tent is a little bit floppy, but it will do. 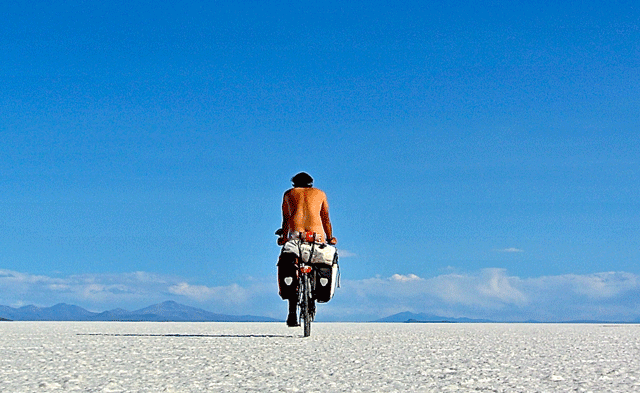 Yep, it took over 7 hours to cover a distance, which if I had followed the guide correctly, would have been 50 kilometres at most.  I dread to think how far I went in the wrong direction.

I spent a rather chilly night under canvass, before rising at dawn to take in the sunrise at the top of the island, yet as I clambered back down, gawping tourists now surrounded my tent.  I gave them my best “fuck the fuck off” stare, but this failed to prevent them photographing me as I ate my breakfast.  A few of the more confident ones engaged me in conversation, and like a performing monkey, I traded goes on my bike for cake. 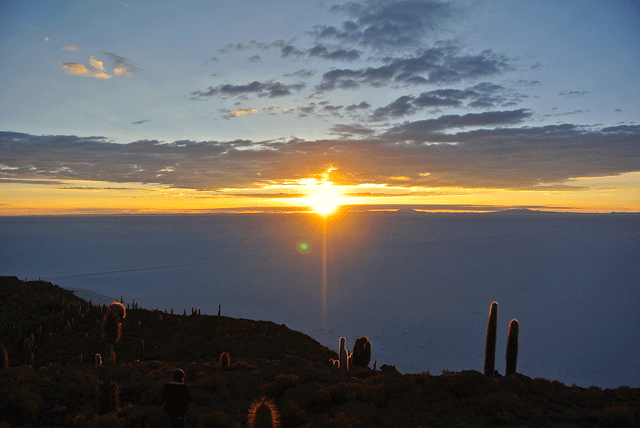 Sunrise over the Salar

With the day-trippers now gone, I made my way across the Salar, this time sensibly following both my compass and the trails made by the cars that ply the salt every day.  The smooth surface of the “road” allowed me to cover the 90 kilometres back to the delights of Uyuni at a rate of knots.

I have covered Uyuni in my last blog, but with its roundabouts made out of rubbish that are feasted upon by the towns canine population, it was the last place I wanted to be.  I made a beeline straight for the bus companies, and 3 hours later, I was on an overnight bus back to Mel in La Paz.

Reunited, we swapped our stories from the previous week, and made the decision to cycle the North Yungas Road, also known as the “Death Road”.  Built by Paraguayan prisoners of war in the 1930’s, the road connects La Paz with the town of Coroico, and descends from 4650m to 1200m over the space of 69km.  As regular roads are often the death of my bicycle, we chose to leave our bikes at the hostel, and rented some full suspension mountain bikes instead.

Our slightly excessive outfits for the day

Wrapped up in our somewhat excessive safety gear (full helmet, knee and elbow pads) we began our descent on a wide paved road, and with my considerable bulk, I opened up a rather large gap over the rest of our group.  It all seemed too easy until we were bundled back into the van and driven to the Death Road proper. 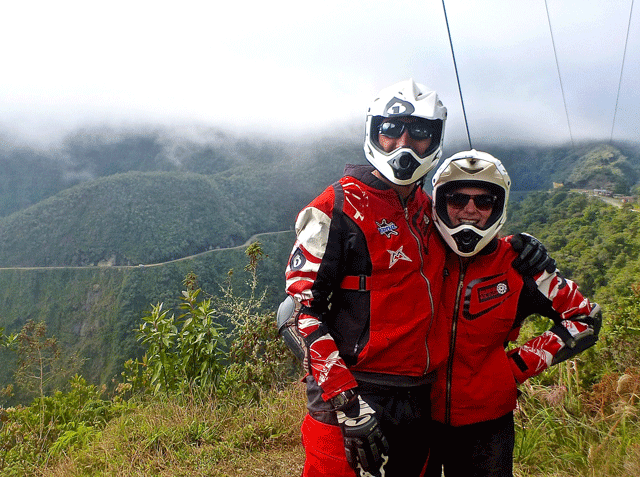 Having pulled off the safety of the tarmac, we drove through the clouds onto the now unpaved road.  Stretching out in front of us was a lush tropical valley, with the brown track clinging to the side of the hills.  We tentatively began to roll over the narrow uneven surface, yet our bikes, with their huge tyres, made easy work of the potholed road.

As we made our way down, we encountered a number of trucks coming up the pass.  For safety reasons, the road rules here are reversed, so descending vehicles are supposed to pass on the left, but with my phobia of edges, and having seen the 600 metres of sheer drop, I decided against following these new fangled rules, and stuck fastidiously to the cliffs on the inside of the road, causing many driver to give me the death stare. 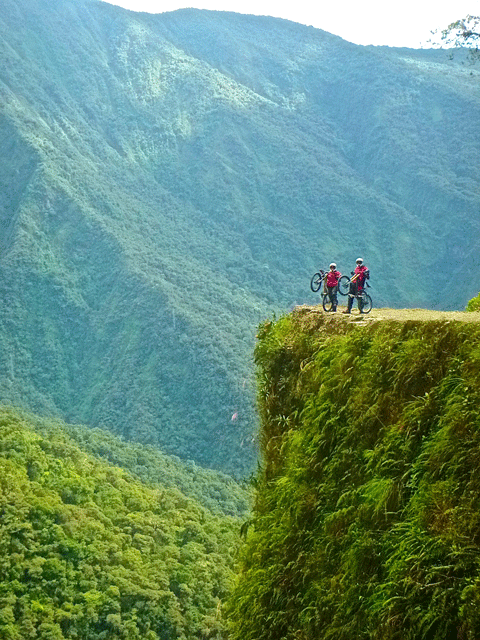 The ride in itself was exhilarating, and in spite of me breaking my bike (are you noticing a theme yet?) and having to spend half the day riding a child’s bike, we made it to Coroico unscathed (unlike a number of other riders, who were covered in cuts and bruises).

And it’s there that I shall leave it.  I know you’ve had to wait a while for this post, so I’m going to start writing the next one right now.  It’ll be up before the end of the week.