The one with very little cycling in it

It was the usual fun and games trying to get our bikes on a bus from San Pedro, so when we arrived back in Calama our intention was to head to Bolivia the next day.  Twitter and Facebook followers will know that we never made it there on our bikes, but if you don’t follow us, I have chronologically outlined the events below. 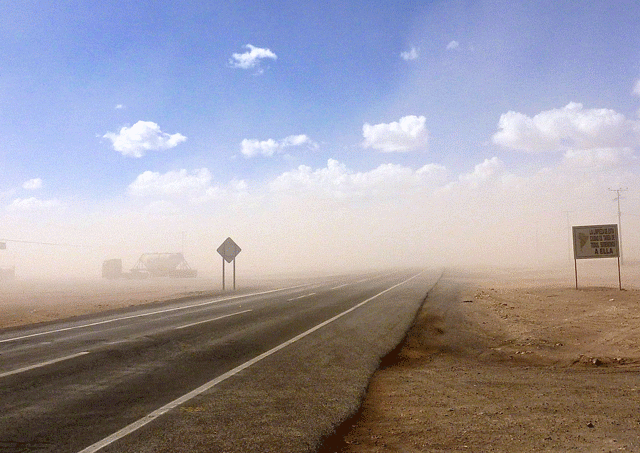 The fakest smiles on the internet. 5000km!

Day 3 – Woke up.  Dosed Mel up on Acetazolamide to combat the effects of altitude.  Ride 10km toward Bolivia.  Pass 5000km!  Mel cannot breathe due to altitude.  Huge argument ensues.  Ride back into town in silence.  Book bus for Bolivia.

So with the bikes in the luggage hold below, our bitterly cold bus struggled up to over 4000m.  The scenery was nothing but spectacular, and as we pulled up to the Bolivian border, I was examining the stamps in my passport.  We had entered Chile on the 21st of December, and with the exception of a few minor detours into Argentina, and a holiday to Brazil, we have spent most of those 6 months in Chile.  We were delighted to finally be leaving. 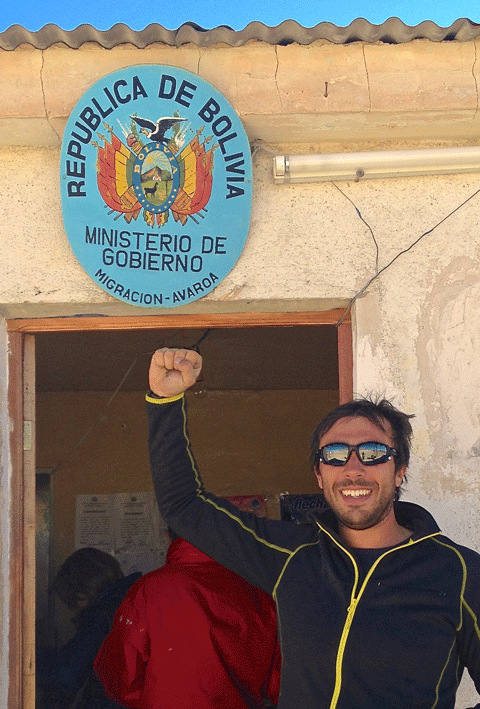 With the immigration formalities completed, the bus skidded its way along the sandy road toward the abomination that is Uyuni.  Truly one of the worst tourist towns I have ever set foot in, its only redeeming feature is its proximity the largest salt flat in the world – Salar de Uyuni.  I had originally wanted to cycle across the flats, but with the altitude causing Mel to wheeze like a forty a day smoker, we took a 4WD tour instead.

The day started out with a trip to the train cemetery, the home of Bolivia’s original rolling stock, which has been unceremoniously dumped on the outskirts of town.  The site is now more of a jungle gym for adults, so we clambered aboard the engines and ran through the rusting carriages for an hour or so before our driver took us to the salt flats. 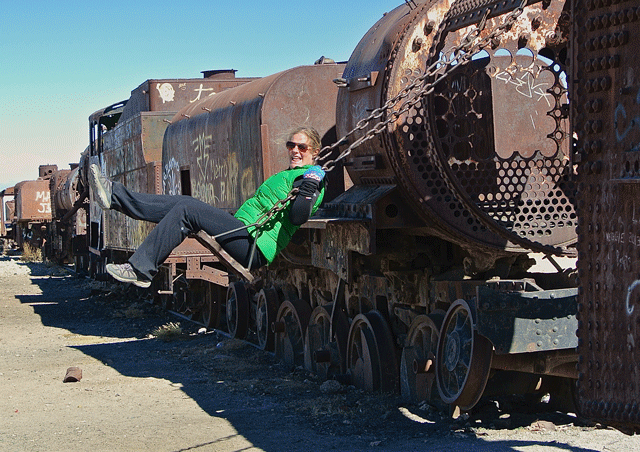 Train cemeteries – like a playground for deranged grown ups

It is hard to find the words to describe the vast expanse of white that we found ourselves staring into, so rather than try, here’s a photo instead.

A panoramic view of the Salar de Uyuni, taken from Isla de Pescado

With our salt tour over and done with, we discussed our cycling plans for Bolivia.  In the battle of Mel vs. altitude, altitude was clearly winning, so we decided to leave our bikes in Uyuni, and bus through the southeast of Bolivia – first stop Potosi.

In the 17th Century, Potosi could claim to be one of the wealthiest places in the world.  The city itself sits at the foot of Cerro Rico, a 4,824m mountain filled to the brim with zinc, tin, and most importantly, silver.  The Spanish Empire took its lion’s share of the silver, at the cost of tens of thousands of lives.  In recent years the sources of quality ore are in short supply, yet mining continues to this day.  There are numerous tours of the myriad of tunnels, and I was keen to take a look.

Kitted up with the finest Bolivian safety equipment – a pair of Wellington boots ridden with holes, and a hard hat with semi-functioning light, we stopped off at the miners market to peruse their strange selection of wares.  It is customary to take the miners a gift, so I opted for the practical – a pair of gloves, and the ridiculous – whisky and a stick of dynamite (only $3 a pop!). 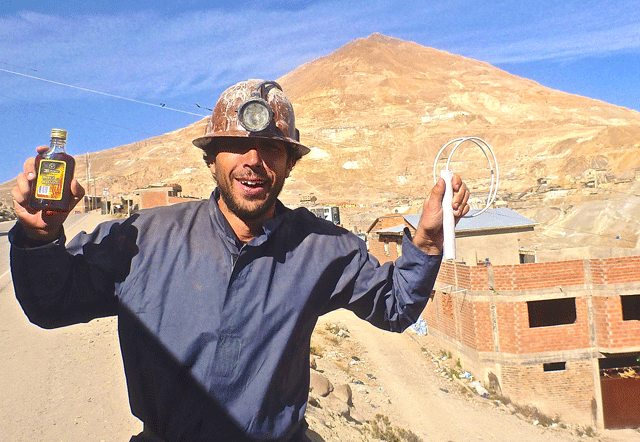 Responsible tourism. Chris bares his gifts for miners. Cerro Rico in the background

Laden with gifts for our soon to be friends, we were driven up to one of the numerous entrances to the mine, and were ushered in by our guides.   With my head torch illuminating the gloom and the dust, the ceiling began to close in, and I found myself walking in a permanent squat, my head crashing into the numerous low beams. 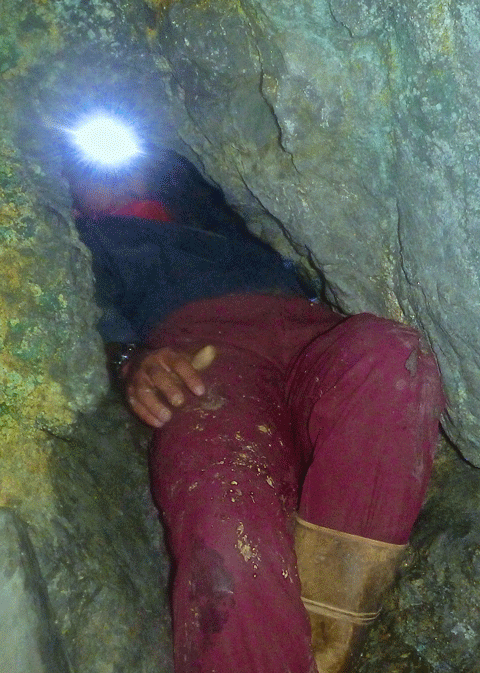 It’s way easier going down than back up

We dodged a number of fully laden mining carts, before being invited to go and watch a miner drill.  Viewing this activity involved squeezing through a hole barely wide enough for me, and then crawling through a tunnel half a meter high.  Sadly, as soon as we arrived at the drilling site, we were ordered back.  Somewhat surprisingly, the hole I struggled to get through going down became more problematic on the way up, and I managed to get myself stuck.

It took a couple of shoves, a number of graceful wiggles, and an indeterminate amount of time to get back out.  It was at this point I decided that I am too tall and too wide to have a future in Bolivian mining.  Still, the tour, which was slowly becoming a “caving” adventure, continued.  We scrabbled down another 15 metres of shaft in order to meet the miners.

The miners work in dreadful conditions, with scant regard for personal safety.  With mouths stuffed with coca leaves to stave off both the altitude and hunger, they work shifts of up to 16 hours at a time.  Sadly accidents and deaths within the mine are common (over 30 reported fatalities last year), and after a spending a lifetime inhaling dust, many miners succumb to respiratory diseases at a young age.

The meeting was interesting, and the group we met seemed to have a gallows humour about the whole endeavour.  Pleased with the gifts they received, we let them get back to blasting, and were more than happy to once again see the light of day. 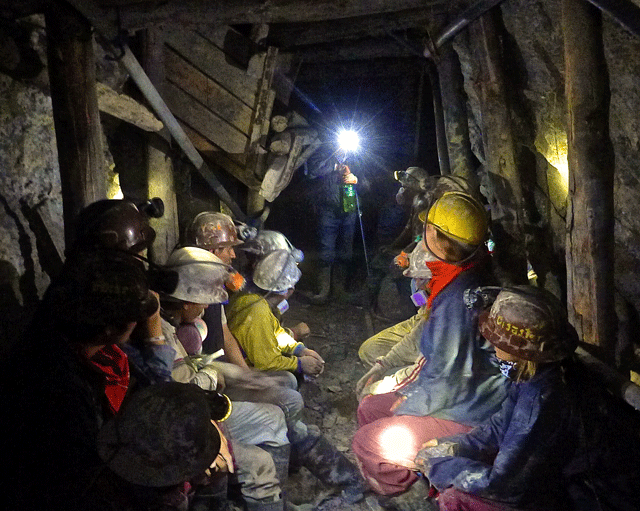 The miners take a break with our tour group

After my traumatic mining experience, it was off to Bolivia’s administrative capital, Sucre.  Sucre is an aesthetically pleasing city, the kind of place you would take a European city break to if it weren’t in Bolivia.  Activities within the town itself however were somewhat limited, so when a group from our hostel said they were off to visit a market, I reluctantly tagged along.

I have never understood the backpacker fascination with markets.  I would hazard a guess that most travellers come from countries at the pinnacle of consumerism, so to take a 2-hour bus ride to look at tat you wouldn’t consider buying is beyond me. 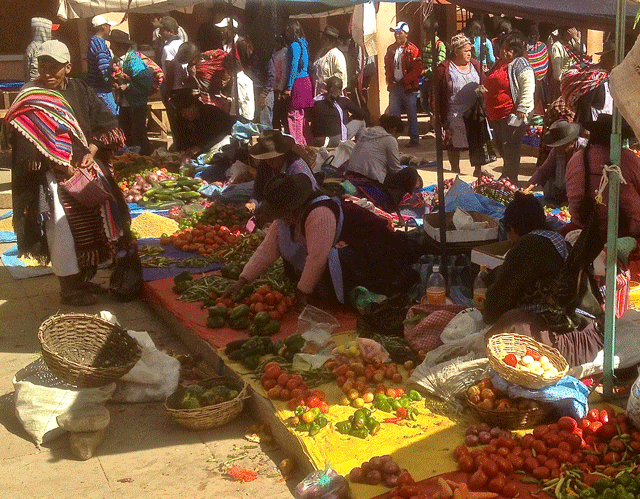 I wonder if a Bolivian would take a bus to Tesco’s to photograph the produce?

After returning from the dreadful market, Sucre’s other attractions were rather uninspiring (Museum of Ethnic Weaving anyone?), so when we heard about the Cretaceous Park with its life sized models of dinosaurs, how could we resist? 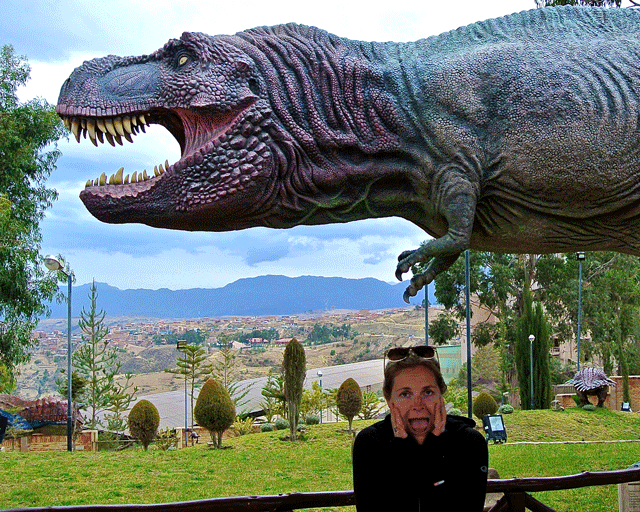 At least I can touch my face with my hands

Apparently these are dinosaur prints

Sadly, the dinosaur footprints that the park is focussed upon are on the wall of a quarry about a kilometre away.  A cement company currently utilises the quarry, so you have to take in the footprints through binoculars.  I’m still not quite sure what I was looking at if I’m honest.

With Sucre’s attractions exhausted, we bussed back to Uyuni, collected our bikes and took an overnight bus to the capital, La Paz.  The city has a chaotic feel that we haven’t experienced in the two other capital cities we have visited, and with its colonial buildings and pleasant squares, it is just the right side of dilapidated for our liking.

So, you’ve probably spent the last 5 minutes wondering about the cycling.  This is a cycling blog isn’t it?

Well yes it is reader, and I have a plan.

I have stashed the altitude affected Mel in a hostel for the next couple of weeks, and set her to work.  For shits and giggles (and to save this CYCLING blog) I have decided to ride back to Uyuni from La Paz.

It’s going to be hard work, but I promise the next post will involve cycling in one form or another.

I may even make a video.